After receiving a lot of backlash comments from netizens on the Ministry of Education’s (MOE) reasoning behind deciding to reopen the schools amid the COVID-19 virus outbreak, Education Minister Ong Ye Kung deleted his previous Facebook post and replaced the post with new ones, and netizens are curious to ask why it was deleted.

Earlier on Sunday (22 March), Mr Ong in his recently-deleted Facebook post underlined the three different reasons – scientific evidence, taking extra precautions, and a goal to reduce disruptions – as to why students are allowed to start classes following the March holidays, along with the link to the Straits Times’s article on “Children less likely to be sick from Covid-19: Professor”.

The deleted post, however, has gained a lot of ‘unsupported comments’ from the netizens and was replaced shortly with a new post.

In Mr Ong’s new post, he posted the same content but without the link. He stated that the previous post had to be deleted as it cannot be shared properly due to the link that was tagged in it.

“I realised that my last post cannot be shared properly because of a link. I have removed the link and reposted. Wasted 900 shares but more important to get the message out. Learn something everyday,” he asserted.

The new post, on the other hand, seems to bring in more supportive comments compared to the deleted post.

Following that, some netizens questioned why the previous post that was claimed filled with ‘unsupported comments’ was deleted.

Facebook user Yen Lim pointed out that more than 70% of the comments were not supportive of the MOE’s decision in Mr Ong’s earlier post, but now the new post seems to have more supportive comments. She further noted, “Something is fishy!”

Other commenters noted that Mr Ong could have edited the previous post rather than deleting the post that was already filled with comments from people who only voiced out their opinions.

Some netizens commented that the previous post was deleted because of too many disagreements, thus it was replaced with a ‘better one’.

Meanwhile, several netizens noticed the post had been replaced and decided to rewrite their comments in the new post. 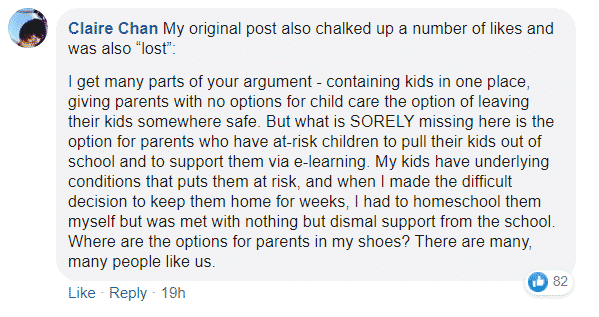