If copyright is owned by Singapore govt, why is CNA being paid for usage of the videos?

Mr Chee Hong Tat, Senior Minister of State for the Ministry of Communication and Information, just recently replied questions poised by Non-constituency Member of Parliament, Leon Perera about the copyright issue of the Parliamentary videos and the discretion by Channel News Asia (MediaCorp), as a private operator has over the Parliamentary video.

In his reply, Mr Chee clarified to Mr Perera that the copyright is held with Government.

Who exactly owns the copyright to the parliamentary videos?

But as noted in a copyright infringement filed by Channel News Asia with Facebook, it claims that the copyright belongs to CNA and successfully took down the video posted on TOC’s Facebook page. After 19 emails sent to the Parliament and various Ministers, including Mr Chee, no answer was given as to whether Channel News Asia was right to claim that the copyright of the video belonged to it. When someone says that they own the copyright, one will assume that any payment required to be made for the usage of the material ought to be paid to the copyright owner, in this case, the government.

But in the practice, that seems to be a different case. TOC was told that payment was to be made to CNA for the use of the videos, and on a per-video basis.

As for the permission to release the videos for usage, TOC also found out the whole process confusing.

In 2014, Mediacorp told TOC that permission has to be sought from the Parliament Clerk.

Then in 2015, the Parliament said that permission has to be obtained from MCI before the videos can be purchased from Mediacorp.

When TOC wrote to MCI, the minstry then said that it had to seek permission from the Member of Parliament featured in the video before it can release any footage. Given that the information contained in the video is public info, why is there a need to seek permission from the MP?

And if the MPs deny permission, is there any way to contest the matter given that the parliamentary videos should rightfully be in the public domain?

A day after Mr Chee gave his response to Mr Perera in Parliament, he made wild allegations against Mr Perera on his Facebook page, saying that Mr Perera had alleged that CNA made biased edits to the videos.

As mentioned in an earlier article about Mr Chee’s allegations of Mr Perera, TOC cited examples where incidents are cut from parliament videos by CNA by cutting the videos based on when the questions are asked and the answer given by the Minister(s).

In fact, if one visits CNA’s microsite, one can see that there does not seem to be any intention of arranging the videos in a meaningful manner so that the viewer is being informed about the chronology order of the speeches.

The viewer cannot search videos based on the speaker or based on topics/ministries, he or she will have to scroll through the pages based on the month of sitting to find videos to their interest. 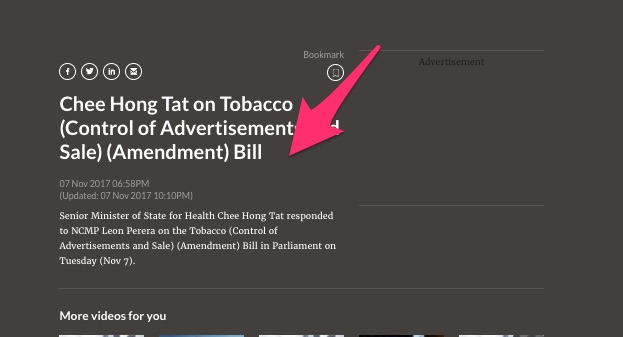 A playlist such as that of a Youtube playlist will do good to orientate the viewer as to the order of speech and the sequence of events.

The sequence can also reveal ungentlemanly antics by certain Ministers, specifically the Minister of Law and Home Affairs, K Shanmugam. One tactic that he pulls in his speeches is to claim that the opposition MPs gave no examples or suggestions to their objection to the proposed bill by saying that he heard none when there had been already many made by the opposition MPs.

One such example is during the debate over the Administration of Justice Bill where he claimed the MPs did not explain how the law will be different with the passing of the bill despite ample examples listed by MPs such as Ms Sylvia Lim in Parliament prior to his response.

But the best arrangement is to have an unedited version of the whole parliamentary sitting for the day so that people can see the movement of the MPs in and out of the Parliament and how empty the parliament can be at times.

As Mr Chee mentioned in his reply, the videos of the Parliamentary sessions have been made accessible for six-months from the previous one-month period.

But why in the first place is there such a limitation set?

If copyright resides with the Parliament, why don’t the Parliament take the videos and host it on the Gov.sg Youtube channel as it does with certain videos. Why is there a pick-and-choice approach on videos to be made to be publicly accessible beyond six-months period? This meant that the videos were not available to the public for over six months without anyone from CNA or MCI noticing despite MCI’s proclamation that the videos to be made publicly available a day after the parliament session. As TOC monitors the microsite closely, we can say that it is not adhered to closely by CNA. Sometimes it will be loaded in the evening, sometimes two days later.

Mr Tan Chuan Jin, the newly installed Speaker-of-Parliament has shared that he wishes to better engage the public on how the parliament carries out its business. What better way to engage the public and educate them than to allow the public to view the videos at their leisure?

If one were to visit CNA’s microsite for parliamentary videos, one will notice how slow the videos load and switch intermittently between low and high-resolution videos due to the poor streaming from its server. (even if one uses fibre-optical connection)