Five S’pore Mayors earn S$660,000 to oversee less than 1m residents each – Comparison to Mayors in other countries

Is Singapore paying too much for part-time Mayors for performing duplicated work?

by The Online Citizen
in Editorial
Reading Time: 13 mins read
65

Despite having only a population of 5.69 million, Singapore requires five Mayors to oversee the needs of the residents in five major areas, as compared to New York – the most populous city in the United States – which only has one Mayor to oversee a population of 19.4 million.

Established in 1997, the Community Development Council (CDC) aims to aggregate needs and resources to the residents, build capabilities and capacities in networks, and connect the communities, as stated on its website.

CDC also supports national policies and engages with residents, doing so in collaboration with Government agencies, grassroots organisations, voluntary welfare organisations, and partners from the public and private sectors.

In November last year, CNA documented a day in the life of South West District Mayor Low Yen Ling to give readers a greater insight into a Mayor’s role in Singapore.

On top of that, she is a Member of Parliament (MP) for Chua Chu Kang GRC, and also holds the Minister of State position in two ministries, namely the Ministry for Trade and Industry (MTI) and the Ministry for Culture, Community and Youth (MCCY).

Among the activities that Ms Low carried out during her day with CNA were talking to students of the Lianhua Primary School in Bukit Batok, having her pictures taken for a handwashing event, and witnessing elderly people in an art class.

Speaking on the CDC’s duties, Ms Low said: “A lot of our work takes place behind the scenes, like aggregating, convening and putting together of resources to meet needs, and while this is not highly visible, it is important because it shapes the output and the co-creation of solutions.”

However, netizens commenting on CNA’s Facebook post on the article pointed out the redundant nature of the Mayors’ role, seeing how similar their duties are to those of the elected MPs.

They questioned the purpose of having five Mayors in Singapore, considering that the MPs are already carrying out the activities and responsibilities mentioned in the article.

Some even described the Mayor’s position as a “waste of taxpayers’ money”.

The need for a full-time Mayors was further called into question by Leader of the Opposition (LO) Pritam Singh in Parliament on 24 February.

Mr Singh highlighted that many Singaporeans are of the view that the salaries of Mayors are “outrageous” and do not “commensurate with the Mayor’s roles and functions today”.

“Other Singaporeans are of the view that the CDCs’ functions can be carried out by other existing entities, or by ministries and statutory boards, including other organisations under the People’s Association,” he said.

Singapore Mayors earn quite a hefty paycheck, considering the size of the population they serve in each of the five districts.

According to the 2012 White Paper on Government salaries, Singapore Mayors earn an annual salary of S$660,000, on top of their annual MP allowance of S$192,500, excluding bonuses. 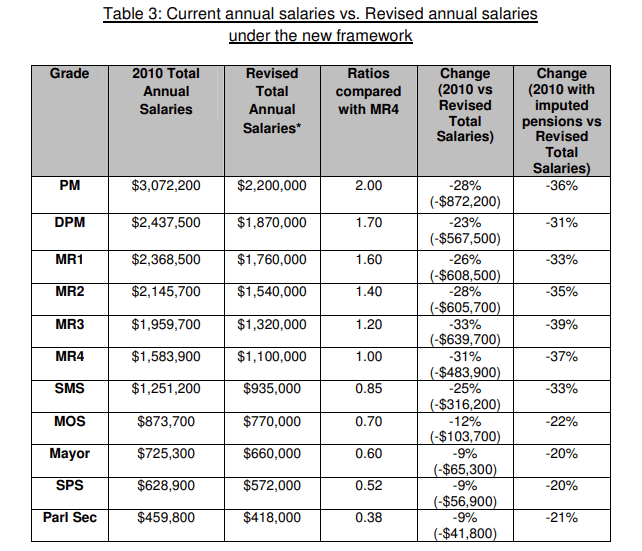 This is despite each of the five CDCs having a population of not more than one million residents.

Singapore is divided into five regions, namely Central, North East, North West, South East, and South West. Each region is handled by a Mayor who runs the CDC, which listed as the following:

So, all in all, the five Mayors earn a total of 3.3 million a year to manage the CDCs (before adjusting for inflation, based on the 2012 figures).

New York City (NYC) is ranked as the “most populous city” in the United States, with an estimated population of 8.3 million.

Even so, NYC only has one Mayor who is in charge of the city’s various public services, and run the public schools and police department there.

NYC’s current Mayor is Bill de Blasio, who has held the position since 2014.

Forbes reported last year that Blasio receives a base salary of US$258,541 (S$348,106) plus free rent at Gracie Mansion – the official residence of the NYC Mayor – and regular police-escorted trips to the gym.

According to City & State New York’s report, the Mayor of NYC is responsible in overseeing all city legislation that is introduced or passed by the City Council, including managing the city budget which is said to be “the largest municipal budget in the US”.

London, the capital of England, has a population of more than 9 million, according to Macro Trends.

Evening Standard reported that his current salary stood at £137,461 (S$256,980) after he voluntarily took a 10 per cent pay cut amid the City Hall’s financial situation resulted from the COVID-19 pandemic.

Mr Khan also revealed in a summary of his tax returns since 2016 that he had no outside earnings, other than his City Hall salary.

As the Mayor of London, he is in charge of promoting economic, social, and environmental improvements in London.

The Mayor of London is also responsible in setting out plans and policies for the city, which cover transport, planning and development, housing, economic development and regeneration, culture health inequalities, as well as a range of environmental issues including climate change and air quality.

According to Worldometers’ statistics, Taipei, the capital of Taiwan, has an estimated 7.8 million residents to date.

The current Mayor of Taipei is Ko Wen-je, who was elected in 2014.

One of the biggest cities in the world, Tokyo, has only one Governor to oversee the population of 37 million, based on the Macro Trends’ statistics.

The current Governor of Tokyo is Yuriko Koike, who was elected in July 2016.

Toronto, the capital city of the Canadian province of Ontario, has an estimated 6 million residents to date, based on Macro Trends’ statistics.

It was stated that during the term of council, remuneration paid to the Mayor and Councillors will be adjusted annually to the Statistics Canada Consumer Price Index for Toronto based on the previous year’s average.

The Mayor would also need to participate in and foster activities that enhance the economic, social, and environmental well-being of the city and its residents.

Over in Seoul, the capital of South Korea, the population there is now estimated at 9.9 million, based on the World Population Review’s statistics.

Seo Jung-hyup is currently serving as the acting Mayor of Seoul, following the death of former Mayor Park Won-soon – who died in an apparent suicide last year after his secretary accused him of sexual harassment.

Sydney, one of Australia’s largest cities, has a population of about 4.9 million to date, based on the Macro Trends’ statistics.

Clover Moore is the longest-serving Lord Mayor of Sydney since she was first elected in 2004.

In 2016, Star Observer reported that Moore has donated her mayoral salary to various charities since her winning office in 2014, and as of August 2016, she has donated about $1.4 million to organisations in Sydney.

Moore stated on her Trust’s website that while she receives a salary as a New South Wales (NSW) MP, she pledged to donate 100 per cent of the Lord Mayor’s fees for charitable purposes via the Trust.

According to the Macro Trends’ statistics, the capital of Norway has a population of about 1,056,000 to date.

Oslo is currently headed by Mayor Marianne Borgen since she was elected in 2015.

On 15 March, Norway Today reported that both Borgen and City Council leader Raymond Johansen of Arbeiderpartiet (AP) received a wage increase that will bring their annual salary to NOK$1,365,016 (S$217,107).

Borgen, however, opined that her salary is “too high”, and asked for her salary to be reviewed, as cited by Nord News.

“I am worried about wage developments. I think that now there has been so much distance between what we as politicians have and the people we have chosen to serve, that we have to re-review the system,” she said.

Now, comparing all the above Mayors’ salaries and the population they have, it is questionable how a small nation like Singapore would need five Mayors to oversee 5.69 million people.

When Mr Singh raised the question about the relevance of the CDCs and the need to have full-time Mayors heading the CDCs, Mayor Denise Phua rejected his questions, and accused him of politicising the issue.

Ms Phua also tried to draw parallels between the roles of Mayors and the CDCs, and that of Prime Minister Lee Hsien Loong’s creation of the LO role after last year’s General eElection.

“Did Mr Singh not accept the role when asked — and the office, and the research assistant, and the salary — and try his best to be relevant too? Singaporeans, too, ask what the role of the Leader of the Opposition in our Parliament is,” she said, adding that such is the case especially when all of the elected opposition MPs currently are “all from one single party”.

However, it is noteworthy that two non-constituency MPs – Leong Mun Wai and Hazel Poa – are in fact from the Progress Singapore Party (PSP).

“His comment on the CDC’s relative absence in the public mindshare has also given us some food for thought: Perhaps the biggest mistake we made was not to have better publicised the work that we do,” said Ms Phua.

The “real work” is “in the work”, she continued. “How much publicity does one have to put out just to justify one’s existence and to prove one’s value?”

“Would Singapore society be worse off or better off without the CDCs? This is a question that is best answered by the beneficiaries of the work done by the CDC,” said Ms Phua, adding that attempts to “politicise” the CDCs’ and their partners’ good work should be avoided.

Responding to Ms Phua’s explanation, Mr Singh replied: “I expected a robust response to my speech and indeed Ms Denise Phua’s remarks are not surprising.”

He highlighted that Ms Phua’s response did not address whether it is still “viable” for Mayors to perform full-time duties, particularly when the roles they used to perform are now carried out by different organisation such as those in social services.

In response, Ms Phua noted that she is “probably the only full-time Mayor”, suggesting that the others are “all double-hatting, or triple-hatting sometimes” as Ministers and other roles. She added that she is running the largest district with three divisions.

“I don’t know whether you consider them full-time, but I do know that they only get one pay,” she remarked.

Ultimately, if we are to compare the Mayors of Singapore to the Mayors of the various cities – NYC, London, Taipei, Toronto, Seoul, Tokyo, Sydney, and Oslo – these Mayors are seemingly far more indispensable than Singapore’s Mayors, considering the amount of population they each have to handle along with the responsibilities on their shoulders.

Singapore’s Mayors seem to only handle social welfare distribution – as seen in the CNA’s article documenting a day in the life of Mayor Low’s life – which is likely why Ms Phua appears to be the only full-time Mayor in Singapore, while the other Mayors are “double-hatting” as Ministers and other roles.

Here’s a closer look at much Singapore Mayors earn in total as compared to the other Mayors of the major cities around the world.