The leaked audio clip of a closed-door dialogue session held at the Singapore Chinese Chamber of Commerce and Industry (SCCCI) last week has gone viral due to controversial statements made by the Minister for Trade and Industry Chan Chun Sing.

In the dialogue, Mr Chan is heard describing incidents of Singaporeans clearing out supermarket shelves as “xia suay” or “disgraceful”. The businessmen at the dialogue session were also heard laughing. He went on to say that he was reaching the limit of his patience, “cannot tahan”, and wanted to “scold people” for their behaviour.

After the audio was leaked, the President of SCCCI Roland Ng San Tiong issued a press release stating that the audio recording of the dialogue session by one of his members was unauthorised and a clear breach of trust.

“It has done damage to SCCCI’s standing as a chamber of high repute,” Ng wrote. “This has betrayed the trust that SCCCI has built with Minister Chan over the years.”

Lawyer Teo Soh Lung: “You don’t have a reputation”

On Wednesday (19 Feb), lawyer and former ISA detainee Ms Teo Soh Lung wrote on her Facebook page expressing her amusement over Ng’s response. “His letter expressed the fear that its standing of ‘high repute’ has been damaged by the leak,” wrote Ms Teo. “Don’t worry about the leak. Recording private meetings are done by governments at all time. Your member’s conduct is not disgraceful at all.”

Ms Teo explained that while she was giving a speech at a private general meeting of the Singapore Law Society in the 1980s, someone present at the event “secretly recorded and reproduced verbatim” for the former prime minister, the late Mr Lee Kuan Yew. She said that Mr Lee at that time was trying to “run me down” at the Parliamentary Select Committee hearing on the Amendment to the Legal Profession Act in 1986.

She also mentioned that back in 2015, she tried to reserve SCCCI’s auditorium for the book launch of LIVING IN A TIME OF DECEPTION by Dr Poh Soo Kai, who is actually the grandson of the late philanthropist Tan Kah Kee and a founder of SCCCI. Dr Poh was one of the founding members of PAP. When the party split in 1961, he left to join the Barisan Sosialis party. He was subsequently arrested and detained without trial in 1963. He was arrested again without trial in 1976 and 1982.

Ms Teo recalled that SCCCI rejected the booking just few days after she paid the rental deposit of $510 without giving any reasons. “I immediately wrote to the chamber to reconsider the irrational decision of your council members. I copied my letter to all the council members who had valid email addresses,” she noted. “Your chamber of so called ‘high repute’ did not even bother to respond or give reasons why the grandson of your founder could not even launch his book at the auditorium that is named after his grandfather.” Dr Poh’s book was later launched at a new venue, the Holiday Inn Singapore Atrium.

At his book launch, Dr Poh even said, “It is sad to note that I, a grandson, cannot make use of a hall that is in my grandfather’s name to launch my memoir which also pays homage to the old man. This, to me, is a sign of a very sick society.”

Hence, Ms Teo pointed out that there’s no reason for the President of SCCCI to investigate the leaked audio recording of Minister Chan. “You don’t have a reputation as far as I am concern. And I am sure, the public don’t care,” she lamented.

Apart from being the President of SCCCI, Ng is the Managing Director and Group CEO of Tat Hong Holdings Ltd. He is also a Member of the Board of Trustees of Chinese Development Assistance Council (CDAC), Board of Directors of Business China, and Advisory Council on Community Relations in Defence.

Ng was actually awarded the Public Service Star (BBM) for his grassroots work in Bishan-Toa Payoh GRC in 2010. He was also the Chairman of Toa Payoh Central Citizens’ Consultative Committee (CCC) under the People’s Association (PA). 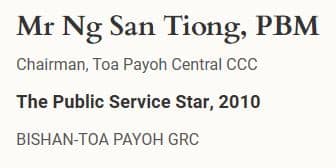 At this point, it is worth to note that Mr Chan has been assuming the position of PA’s Deputy Chairman since 2015.