On 15 February, Channel News Asia shared an article titled “Becoming Singaporean: In the shoes of a Filipino migrant family” on its Facebook page, eliciting a mass of responses from netizens both Singaporeans and non-locals.

One comment, in particular, has triggered furious debates in the comments.

A Facebook user, Cariassus Paulus wrote in the comment section that employers hire more foreign Information Technology (IT) workers in Singapore because the demand in the industry is higher than what local graduates can fill in.

“To those who are not happy with foreign workers in Singapore, I think you guys should encourage all Singaporean kids to study IT-related courses,” he wrote.

Paulus who indicated that he graduated from Philipines, added, “The reason why a lot of foreign IT workers are in SG is because the resource demand in the industry is so much higher than what Singaporean IT graduates can fill in.”

Local netizens disagreed with the comment and most of them said Singapore employers hire more foreigners because they rather pay a lower salary.

A commentator added that foreign workers are able to accept lower salaries because it is considered as good pay based on the standard of living in their country, compared to Singaporeans that have to bear with the country’s high cost of living. 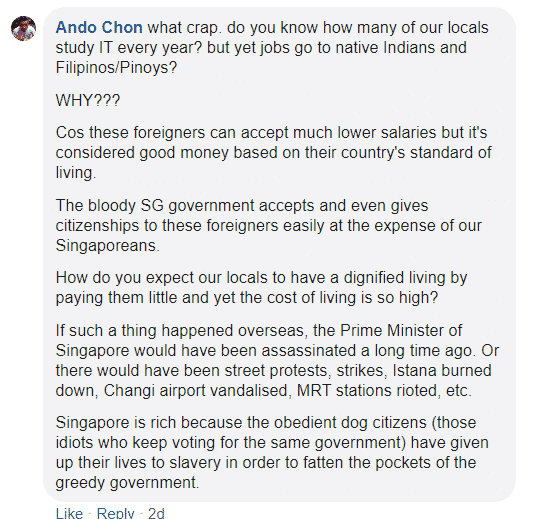 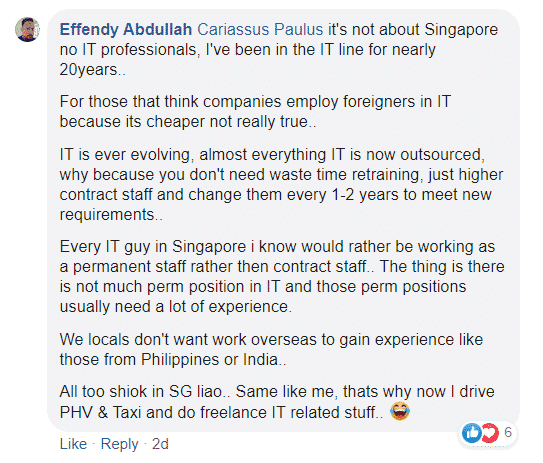 A commentator said Singaporean workers are “costlier” compared to foreign workers because they have to pay the Central Provident Fund (CPF).

Furthermore, some commentators said employers preferred to hire foreign workers because they are unlikely to file a complaint to the Manpower Ministry even if they are exploited.

On the other hand, a commentator who appears to be a Vietnamese, agreed with Mr Paulus’s comment and applauded the Singaporean Government for implementing such policies that can attract more talents from other countries.

Some commentators also supported Mr Paulus’s comment and noted that it happened to other industries as well.

On 1 January, Manpower Minister (MOM) Josephine Teo said that MOM plans to update the Fair Consideration Framework that sets out requirements for all employers to consider the workforce in Singapore fairly job opportunities, this year.

“Expect stronger deterrence for discrimination against Singaporeans when hiring, but also stronger support for employers who are committed to giving our people a fair chance,” she said.

In August 2014, The Fair Consideration Framework (FCF) was introduced after Singaporeans voiced their frustrations in regards to foreigners taking away good-paying PMET jobs from locals.

Under the rules then, companies with more than 25 employees must advertise PMET jobs that pay less than $12,000 a month.

The advertisements need to be placed in the national Jobs Bank for at least 14 days before the firms can apply an Employment Pass (EP) for any foreign job applicants.

Last year, the framework was tightened to cover firms with more than 10 employees and jobs that pay less than $15,000 a month.

Despite MOM’s good intentions of implementing FCF, many companies are running rings around the PAP government by abusing the system.

Many companies simply put up their job advertisements on the Jobs Bank just “for show” but end up recruiting foreign workers nevertheless. The companies have no intention to recruit Singaporeans in any case, defeating the purpose of having the Jobs Bank.

A good example can be seen on this thread on expat.com, a popular site for foreigners wanting to get a job in Singapore:-

In March this year, a foreigner, schaw, wrote on the forum asking for advice. After the company put up a job advertisement on the Jobs Bank, it proceeded to apply EP for schaw. But the salary, probably a lower one, was offered to schaw. This resulted in the rejection of his EP by MOM.

Schaw also asked if the 2 week period of waiting time was necessary after a job advertisement was posted on Jobs Bank. He said, “Re-posting job ads for 2 weeks is must (sic)?”

Skyline83 replied that the 2 week period is mandatory. And “only after doing so and assuming that no local Singaporean has applied and is qualified can they appeal on your rejected EP application (sic),” he explained.

About one month later, schaw reported that his EP was approved.

It was only in Jan this year that a logistics company was charged by MOM in court for making a false declaration in an Employment Pass (EP) application by noting that it had properly considered Singaporean candidates before employing a foreigner since the FCF was introduced in 2014.