The Finance Ministry (MOF) released a report yesterday (22 Oct), reporting on the socio-economic outcomes of Singaporeans born between 1940 and 1979.
MOF said that compared to older age groups, Singaporeans in their 40s today are more educated, better able to find jobs, earn more, save more, and live longer and healthier years.
In the case of education, MOF noted that more younger generation Singaporeans now have a university degree.
“Educational attainment levels have improved across the cohorts of Singaporeans studied in the report, in line with enhanced access and improvements in the quality of the education system,” MOF said.
“Only 22% of Singaporeans born in 1940 – 1949 went beyond secondary school, compared to 79% of those born in 1970 – 1979.”
It added, “Today, students benefit from well-resourced schools and a large degree of flexibility in the education system, where they can choose from multiple pathways based on their strengths and talents.”
MOF’s data shows that 44 per cent of 4th generation Singaporeans (born in 1970 – 1979) have a degree versus 7 per cent of 1st generation (born in 1940 – 1949). 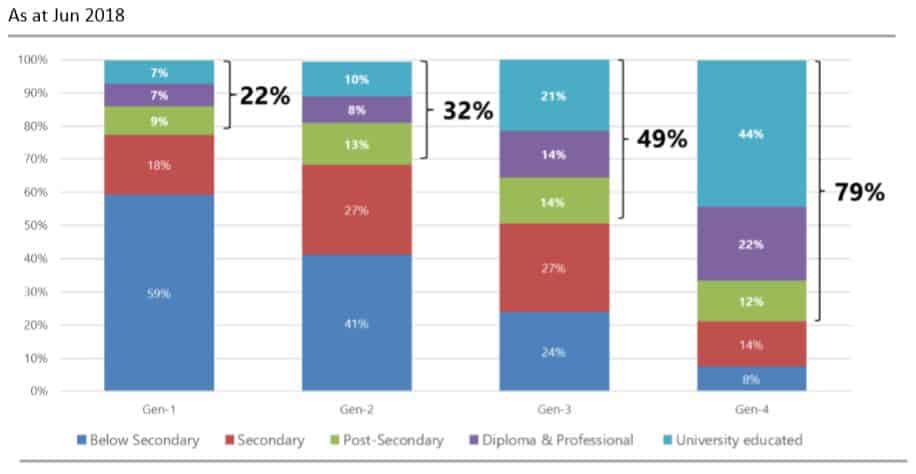 In spite of the good progress of having more Singaporeans getting a university degree, Education Minister wants to cap the proportion of graduates in a cohort to about 30 to 40 per cent. He mentioned this 2 years ago at the 47th Saint Gallen Symposium in Switzerland.
He said education system needs to be aligned with the structure of the economy, so that people will continue to be armed with the required skills to find jobs in the current age of disruption.
In Singapore, this means capping the proportion of graduates in a cohort at about 30 to 40 per cent, while training the rest for vocations in various industries. This approach, he added, has ensured there was no glut of graduates in Singapore, and kept graduate unemployment low.
That is to say, Minister Ong will cap the number of university places to 40% or less for a cohort. But of course, many Singaporeans who couldn’t get into a local university would end up studying for external degrees, either locally or abroad.
Minister Ong feels that Singapore has an over-emphasis on academic qualifications in education.
Still, the cap of 30 to 40 per cent cap is a marked improvement from its previous alleged cap of 20 to 25 percent cap revealed in a Wikileak dump of cables from the United States.
Documented in a cable transmission from Singapore in 2007, Cheryl Chan, Assistant Director of the Planning Division at the MOE, shared that the government does not plan to encourage more students to get a higher education. The university enrollment rate will continue to be maintained at 20-25 percent because the Singaporean labor market does not need everyone to get a four-year degree, she asserted.
What Minister Ong said about the 40% cap is not new. The government increased the cap to its current target in 2012 after the People’s Action Party scored its poorest results at the General Election in 2011.
In a 2015 Today article, a graduate whose parents spent more than S$170,000 on a sports science degree in Brisbane, Australia, after he graduated with a biotechnology diploma in Singapore, was quoted, “The government shouldn’t tell people not to go to university unless they can promise the same job opportunities as graduates…But obviously that’s not going to happen.”
Meanwhile, while MOE continues to cap the number of university places in Singapore to 40% or less, the Singapore government continues to allow more foreign PMETs to enter into Singapore to work.