The son of billionaire Sam Goi, Ben Goi, 43, died on Sunday (3 Feb) and a number of People’s Action Party current as well as former ministers were reportedly seen at the wake consoling Sam Goi.

Some of the present ministers who went to the wake included Heng Swee Keat, Vivian Balakrishnan, Masagos Zulkifli and Josephine Teo.

The relationship of Sam Goi and PAP is a close one. Sam Goi is one of the important grassroots leaders at Ulu Pandan, under the Holland-Bukit Timah GRC, which is helmed by Vivian Balakrishnan.

Some PAP ministers and MPs, after their retirements from politics, would go on to invest in Sam Goi’s companies.

One example is former National Development Minister Mah Bow Tan. He stepped down from the Cabinet after 2011 GE but continued as part-time MP until 2015.

After 2011 when Mah was no longer a member of the government, he invested in GSH Corp, essentially a property company. Sometime between Mar 2012 and Mar 2013, records shows that Sam Goi substantially increased his shareholdings in GSH from 15% to 46.5%, making him the largest shareholder. Simultaneously, Mah also entered into the fray and became the 6th largest shareholder with 165 million shares (3.3%).

A financial article in 2014 explained that it was in 2012 when Sam Goi was appointed the new chairman of GSH that the company set off to go into property business and ditched its original IT distribution business. Around the same time, Mah also went in to invest in GSH.

He then started selling his shares for the next couple of years. The latest company annual report (as at Mar 2018) shows that Mah now owns 24 million shares (1.2%). 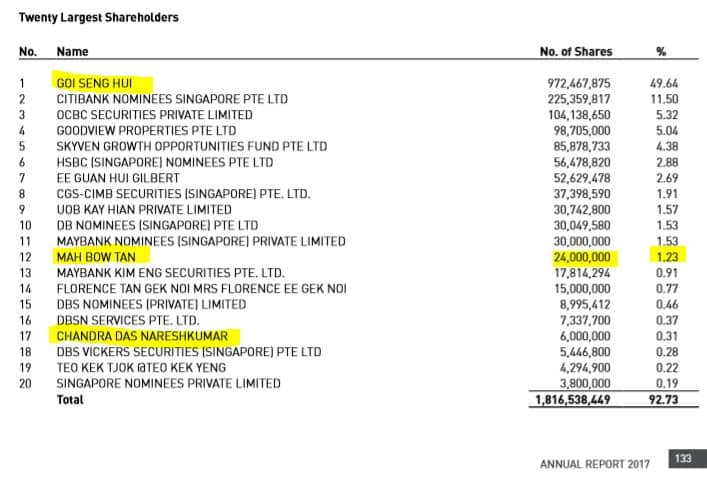 Mah’s investments into property companies may not necessarily show that he is familiar with the mechanics of property business.

Before Mah stepped down from his National Development post in 2011, he once attacked Workers’ Party’s proposal to lower the price of new HDB flats. Then WP Secretary-General Low Thia Khiang had called for the pricing of land to be lowered for HDB flats, saying it is a matter of internal transfers within the government.

Mah replied that the WP’s proposal will devalue existing flats as home buyers turn to new flats rather than resale flats. He also criticised that WP’s proposal to lower land costs would amount to an illegal raid on Singapore’s reserves. He said that state land forms part of the reserves. When the government takes state land for public housing, it has to pay the full value of the land back into the reserves. But of course, he forgot to mention that this full value of the land is being passed on to Singaporeans buying the HDB flats.

In fact, just before 2011 GE, Mah even said, “We’re proud of the asset enhancement policy. (It) has given almost all Singaporeans a home of their own… that grows in value over time.”

In any case, this turned out to be false. In 2017, the present National Development Minister Lawrence Wong made a public statement saying that only 4% of HDB flats were redeveloped through Sers since 1995. That is, these old flats, typically at very good locations, were bought back by HDB and the flat owners were compensated accordingly.

But the vast majority of flats, Wong warned, will be returned to HDB when their 99-year lease run out without any compensation. “As the leases run down, especially towards the tail-end, the flat prices will come down correspondingly,” he said. “So buyers need to do their due diligence and be realistic when buying flats with short leases.”

Hence, Wong’s clarification contradicted Mah’s exuberance with regard to HDB’s value growing over time. They do not and their value would hit zero when the leases end. Mah appears not to have understood the meaning of leasehold in property when he was the National Development Minister.

Who is Chandra Das Nareshkumar?

In the latest top 20 shareholders of Sam Goi’s company GSH (as at Mar 2018), listed at rank 17th was a person by the name of Chandra Das Nareshkumar who owned 6 million shares.

It’s unclear if Chandra Das Nareshkumar is linked to Chandra Das S/O Rajagopal Sitaram, who is a former PAP MP from 1980 to 1996 as well as the Chairman of the Trade Development Board from 1983 to 1986 and Chairman of NTUC Fairprice from 1993 to 2005.

And of course, Chandra Das S/O Rajagopal Sitaram himself was the Chairman and Director of Action Information Management (AIM), the $2 company which had the PAP headquarters in New Upper Changi Road registered as its address. The company came into prominence after it was revealed in public that the company had bought over the public funded town council management software just before PAP handed the Aljunied TC to WP in 2011.

At the time, WP asked how public interest was served when the PAP town councils sold a computerized town council management system to AIM.

Then, WP MP Sylvia Lim said, “It is regrettable that both Dr Teo’s and Mr Das’ statements have been calculated to side-step the most critical question of how the public interest was served when the PAP-managed Town Councils, which developed the computing and financial systems at significant cost and co-owned them, sold them off to a third party which could exercise rights of termination if there was a ‘material change’ in the composition of a town council.”

“What justification was there for the Town Councils to relinquish ownership and leave the continuity of Town Council operations at the mercy of a third party? Residents all over Singapore have a right to know.”

“In other words, the PAP-managed Town Councils saw it fit to sell away their ownership of the systems, developed with public funds, to a political party (PAP), which presumably could act in its own interests when exercising its rights to terminate the contracts,” she added.

“If anything, this episode clearly demonstrates the risks to Singaporeans of having a lack of alternatives in every sense.”