In this increasingly global society we live in, being socially conscious is no longer something we can choose to be ignorant about. An issue that doesn’t escape Singapore is cultural appropriation—that is the unacknowledged and inappropriate use of the customs, practices and traditions of a particular group by those of another, usually more dominant group.

On Monday (10 February), photographer Benjamin Matchap shared on his Facebook page an example of such cultural appropriation happening in Singapore.

Mr Matchap shared several images of screenshots from an Instastory that were sent to him showing the wedding of a Chinese couple in Singapore. The images show the bride wearing a Native American headdress.

There were also photos of a group of Chinese guests in traditional Indian outfits, some of them holding up their hand with the middle finger and thumb pressed together. This gesture might be familiar to many as an ‘Indian’ hand gesture used in traditional dances.

This was actually a second posting by Mr Matchap as the first post showed the uncensored faces of the bride and attendees.

In his latest post, Mr Matchap said: “Bottom line, people culture should not be your costume, and the native American head dress is a deeply religious symbol it’s like wearing a Taoist monk outfit as a “for fun” kinda thing.”

He continued, “and I really don’t get the link between the Indian theme and the native American headdress unless they think “red indians” and Indians are…erm…the same?”

In an update to the post following exchanges in the comments, Mr Matchap added that there’s nothing wrong with wearing another culture’s traditional clothing but it’s important to check if they are deeply religious or problematic for someone not of that culture to use it.

He added too that there is nothing wrong with wearing traditional Indian clothing but making gestures like “shaking your head side to side” is insensitive.

In his update, Mr Matchap also explained that friends of the bride have pointed out that the hand gesture was an ‘inside joke’ while the use of the headdress was because of the couple’s ‘love for parrots’.

However, Mr Matchap lamented that it still doesn’t explain the ‘shaking head’ gesture he saw in the related Instatory video. He added that it also does not address the fact that Native Americans have been vocal about not wanting others to casually wear their traditional headdress or to use it as a costume given that it is something that is part of their religion and the right to wear one has to be earned.

Mr Matchap also pointed out how Native Americans have suffered tremendously in history, having faced genocide, and that it is understandable why they might be ‘touchy’ about people misappropriating their culture.

He added, “If are considering wearing these things for fun please do some research and see if it is appropriate.”

Friends explain the misappropriation; others say ignorance is no excuse

A friend of the bride and groom, Mr Lester Ang, commented on Mr Matchap’s post to explain that the bride’s choice to wear the headdress was because the couple loves parrots and that it was in no way intended to mock or intentionally disrespect Native American culture.

He also explained that the group of four Chinese guests wearing traditional Indian outfits did so because they have a half-Indian friend who planned on wearing something traditional. They just wanted to ‘tag along’. However, she couldn’t attend at the last minute.

Mr Ang also called for Mr Matchap to be more ‘accepting and tolerant’.

Mr Matchap pointed out that even as an inside joke, it is distasteful. He also explained how the issue of the Native Americans headdress being used by those not of that culture is a long and tiring one.

The exchange continued with both sides standing firm in their positions: Mr Lester asserting that the couple meant no disrespect and were merely ignorant but that it did not warrant being called out publicly, while Mr Matchap maintaining that basic respect and a little research is the least anyone can do when they think about using traditions of another culture. Another person pointed out that they should just learn from their mistakes and apologise for their actions, whether it was intentional or not. She added that not knowing does not excuse their mistakes.

Mr Matchap’s post also sparked another thread of conversation with one person, Christopher Poon, saying, “Imagine being uptight about people having fun”.

Mr Matchap countered that it is privileged to think that making fun of another culture is ‘fun’.

Mr Poon then responded that the suffering of the Native Americans is in the past and questioned why Mr Matchap keeps bringing it up. He then agreed that culture should not be misappropriated but also said that it can be used “in good fun”. He added, “I mean people call it distasteful, I call it living”.

When asked whether he was aware that Native Americans hate people using their headdress casually or as costumes, Mr Poon surprisingly replied that he is aware but is “not here to fight for social justice”.

Another thread on this post was sparked by Robert Dobaire who wondered why it was okay for influencer Preetipls, who is Indian, to wear a cheongsam and perform cultural misappropriation. 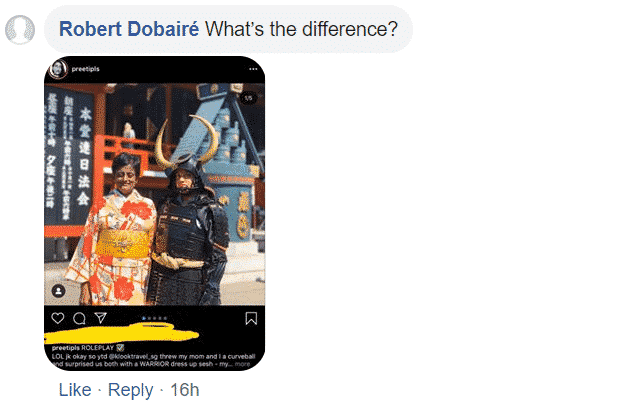 It was also pointed by Genevieve Toh out that Preetipls’ video of her wearing a cheongsam was done with the intention of ‘bridging cultures’ and share anecdotes of racism that she’s encountered. On the other hand, the couple’s decision to use the Native American headdress was not driven by such intentions.

Ms Toh also explained that the Japanese ‘have no qualms’ about tourists wearing their traditional outfits to ‘perpetuate its history and culture’, so Preetipls doing so does not count as cultural appropriation.

Finally, Ms Toh also pointed out that Native Americans history is rife with minority discrimination and racism, pointing out that the Chinese in Singapore have not faced the same sort of mistreatment. She questioned then why some people ‘kick up a fuss’ when other’s wear traditional Chinese outfits like the samfu.