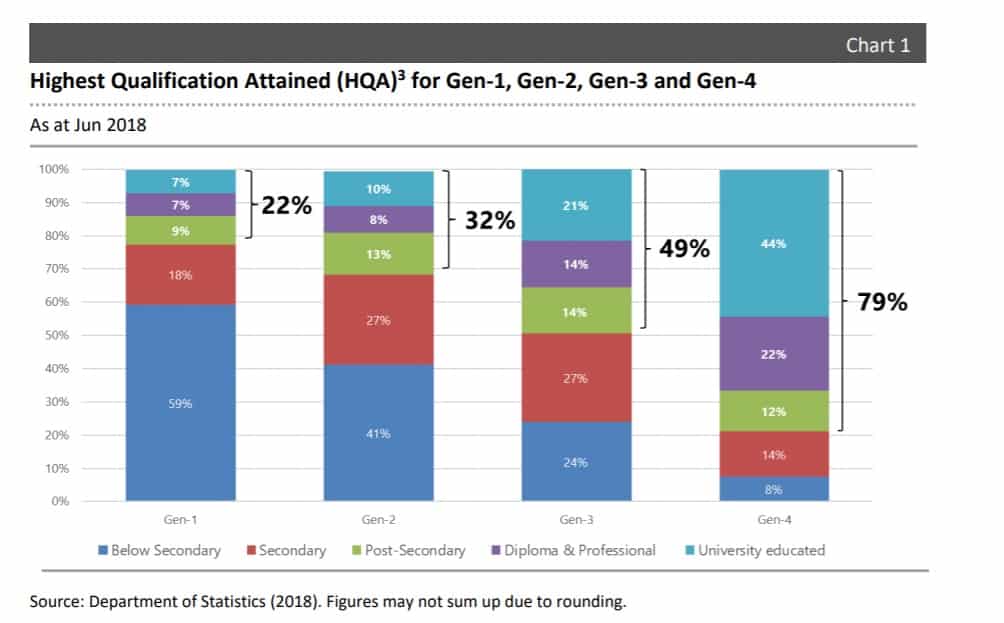 “Younger Singaporeans who are not included in the current study are expected to attain even higher educational qualifications,” MOF said.
It added, “Today, students benefit from well-resourced schools and a large degree of flexibility in the education system, where they can choose from multiple pathways based on their strengths and talents.”

Due to higher educational qualifications, younger Singaporeans are able to find jobs, earn better wages and save more funds for retirement. Additionally, the Labour Force Participation Rates median gross monthly income from work and Central Provident Fund (CPF) balances have also increases across age groups.
The Labour Force Participation Rate for those born in 1970 to 1979 is 89%, an increase from 79% for those born in 1950-1959. This happened as more women began entering the workforce, since male participation rates remained steady across three generations. 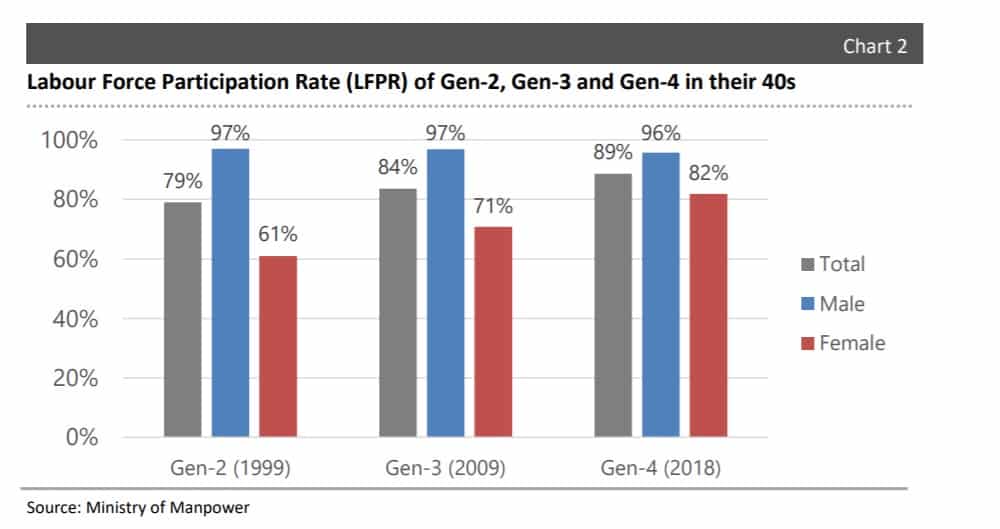 On the other hand, the median real gross monthly income from work, which includes employer CPF contributions, also rose across all generations.
Singaporeans born between 1970 to 1979 earned S$5,900 in their 40s, and this is more than double of the S$2,800 earned by those born between 1950 to 1959 when they were in their 40s.
If that’s not all, the median CPF balances in Ordinary and Special Accounts for Singaporeans in their 40s has also risen, with the younger group saving three times more of those in the oldest group, after adjusting the inflation.
“Today, the Government intervenes actively to support Singaporeans who want to work, such as by supporting skills development and employment facilitations. For example, the Adapt and Grow initiative helps jobseekers affected by economic slowdowns to get back into employment as soon as possible. Employers also benefit from various grants and programmes to upskill their workers,” MOF said.

The report also revealed that the residential property ownership rates have gotten better, increasing from 76% for Singaporeans born between 1940 to 1949 to an average of around 85% for the three younger age groups.
The report stated that this was due to higher wages and savings. Additionally, the majority of Housing and Development Board (HDB) flat owners also have leases that are long enough to cover them until they reach the age of 95.
“This also means that they have an asset that can be monetised if necessary, to supplement their retirement needs (for example, by right-sizing or through the Lease Buyback Scheme),” MOF said.

It continued, “With enhanced healthcare schemes like MediShield Life, CareShield Life, Community Health Assistance Scheme, Screen For Life, younger Singaporeans will be better prepared for their healthcare needs, including the early detection and management of conditions.”
Despite having better quality of life and more personal resources for retirement, the younger Singaporeans have lower marriage rates and smaller family sizes. This could possibly be due to “less available support from the immediate family”, MOF said.
According to the ministry, marriage rates dropped from 92% for those born between 1940 to 1949 to 82% for those born between 1970 and 1979.
Apart from that, the average number of children per ever-married female also deteriorated from 2.5 children for first-generation Singaporeans to 1.8 children for the fourth-generation children.
“The Government will continue to work closely with community partners to support those who may need additional assistance, even as we encourage the strengthening or inter-generational family bonds. The Government will also do more to help Singaporeans to upskill, earn and save more,” the report said.

Risk of becoming a Sandwich Generation

Although the younger age group fared well in all the key indicators as compared with the older generations, they are described as a Sandwich Generation as they have to support their growing children and ageing parents.
According to the findings released by insurance company NTUC Income in August this year, it was found that 94% of parents (aged 35-55 years old) surveyed said that they were currently pressured between having to financially support their children and their old parents as well. The majority of these parents also believed that their children and grandchild will continue to get caught in Sandwich Generation trap.
Meanwhile, when young Singaporeans (aged 21-29 years old) were asked if they believed that they will become the next Sandwich Generation, nearly 80% of them responded affirmatively.
Their top reasons for this included feeling responsible to financially support their retired parents, longer life expectancy of their parents, and the belief that their parents will not have sufficient savings for retirement.
Another thought-provoking result from the survey was that young Singaporeans, in addition to making more financial investments for the future, were also prepared to make big personal sacrifices such as not marrying, or have fewer or no children to avoid becoming ‘sandwiched’ in the future.
In response to the research data, Assistant Professor Tan Poh Lin from the Lee Kuan Yew School of Public Policy, National University of Singapore, said that the information was consistent with the stresses faced by society brought about by multiple factors, which may include higher costs of living, depressed wages and also the fact that people were starting their families later and were not beginning the push to save up enough for their retirement.