Tan Kin Lian receives backlash for publishing his NRIC online, but is NRIC actually an information that is well-secured?

On 27 May (Monday), the ex-presidential candidate and former CEO of NTUC Income, Tan Kin Lian took to his Facebook to publish his personal details which include his NRIC number, email address, mobile number and date of birth.

He did it to prove a point to people over the need to not overreact when it comes to breaching of personal data. 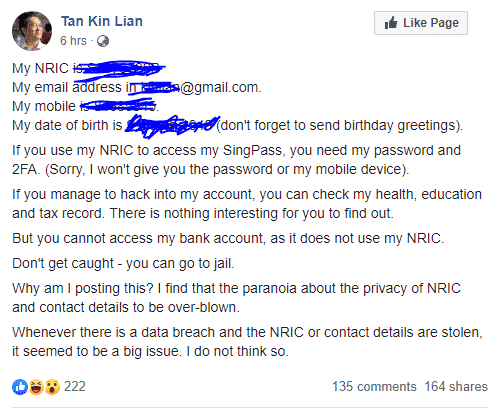 Although Mr Tan thinks it’s not a big deal to publish this information online as people can’t do much with it without his password, but he was quick to be proven wrong.

Just a few hours later, he posted another update on his Facebook stating that his SingPass account has been locked after “one mischievous” person tried to log into his account six times, resulting to it being locked.

Thankfully, he managed to unlock it after contacting GovTech. However, he went on further to comment on the inadequacies of the SingPass system as it allows anyone with someone’s NRIC to cause the account to lock.

Anyway, I told GovTech to review their process. The current procedure of blocking the account after six failed attempts is clearly, may I say, “stupid”.

Govtech justify their action with this common excuse – for security. I do not see how they can make SingPass by secure by locking out people unnecessarily.

In the comment section of his post, many netizens condemned and mocked his move as his SingPass account being locked is a thing that he himself inflicted. This is because they noted that NRIC should be a confidential data and must not be revealed to others.

Although Mr Tan firmly believes that disclosing NRIC is not going to cause any problem, but the reality is it is still used for various important purposes like securing a loan or applying for a new telephone line.

In fact, come September 2019, collecting and making copies of NRIC will be made illegal by the Personal Data Commission.

“In today’s digital economy, indiscriminate collection or negligent handling of NRIC numbers can increase the risk of unintended disclosure and may result in NRIC numbers being used for illegal activities such as identity theft or fraud,” said the commission.

It also added that such risks arise as the NRIC number is a permanent and irreplaceable identifier.

However, it’s important to note that NRIC number can be obtained by anyone through public records or can be purchased by for only S$5.50 via Bizfile under the Accounting and Corporate Regulatory Authority (ACRA).

Even though this information can be easily obtained by anyone, especially those with nefarious intentions, but what Mr Tan did was to provoke some bored individual to use his NRIC and lock him out of the SingPass system.

In a way, Mr Tan may be right to a certain extent where people should not be paranoid about disclosing their NRIC numbers, but it is still something that is meant to be personal.

As such, it’s important for businesses and individuals to have rules to prevent from accessing and recording NRIC numbers of others. After all, it is still an important identification detail that is required when someone wants to process any legal or government-related documentations.