Quoting the 2019 Edelman Trust Barometer survey, local media, the Straits Times published a front page news today saying that Singaporeans’ trust in the government as well as the mainstream media has gone up (‘Singaporeans’ trust up in Government and media: Survey‘, 18 Mar).

“The 2019 Edelman Trust Barometer – a survey of people’s sentiment about four key institutions in their countries – the government, media, non-governmental organisations (NGOs) and business – showed that 67 per cent of Singaporeans trust the Government,” ST wrote.

Furthermore, ST also said that Singaporeans trust their government and the mainstream media more than those people do in other developed nations, again quoting Edelman’s survey.

In the case of the media, it said that trust in the mainstream media in Singapore is also up, an improvement from two years ago.

“The score for Singapore is also higher than the global average amid a continuing uncertain global environment and a quest for credible news,” it wrote. “At the same time, trust in social media remained low, with the majority of people – some 73 per cent both globally and in Singapore – worrying about false information or fake news being used as a political weapon.”

“Trust in social media in Singapore, on the other hand, hovered in the range of 45 to 46 per cent,” ST added.

Interestingly, the survey showed that in 2015, when the PAP won the general election with an extremely good showing of 70%, Singaporeans’ trust of the mainstream media also dropped to among the lowest at 62%. 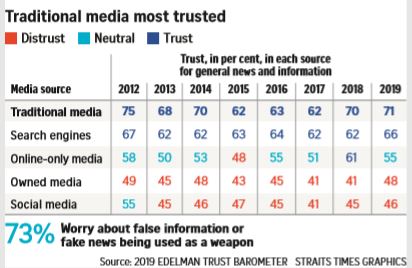 Meanwhile, the Press Freedom Index, an annual ranking of countries compiled and published by Reporters Without Borders, shows that press freedom in Singapore has been worsening in the last 10 years.

That is to say, press freedom in Singapore becomes less free in the last decade, dropping from 130-140th positions to 151st last year. Singapore is sandwiched between Ethiopia (ranked 150th) and Eswatini (ranked 152nd). Right at the bottom of the ranking is North Korea, ranked 180th among the countries in the world.

The Press Freedom Index reflects the degree of freedom that journalists, news organisations, and netizens have in each country, and the efforts made by authorities to respect this freedom. The index only deals with press freedom and does not measure the quality of journalism nor does it look at human rights violations in general.