On Monday (18 Feb), NCMP Associate Prof Walter Theseira asked Minister Josephine Teo in Parliament about how much on average, the Singapore elderly are getting their CPF payouts after they turned 65. He also asked what percentage of the elderly CPF members are receiving monthly payouts of less than $500.

Prof Theseira is the Associate Prof of Economics at the Singapore University of Social Sciences (SUSS). Thanks to Prof Theseira’s questioning, Manpower Minister Josephine Teo had to reveal the data.

She said that of those who are receiving their CPF payouts presently, 74% had monthly payouts under $500.

The average monthly payout for CPF members were as follows as at Dec 2018:

Hence, these 3 groups of Singapore elderly would receive on average of about $355 per month from CPF Board, with nearly three quarters receiving less than $500.

But Ms Teo was quick to add, “In addition to CPF payouts, members may receive additional retirement support from the Government through the Silver Support scheme. This provides them with an average income supplement of about $600 per quarter, which is in addition to the other forms of Government support such as the Workfare Income Supplement, GST vouchers and ComCare.”

Of course, schemes like Silver Support or ComCare are only meant for the lower income group in Singapore.

“With increased labour force participation and improvements to the CPF system made in the past decade, we expect younger cohorts to have higher CPF payouts,” she added.

With an average of $355 per month the Singapore elderly are getting from CPF Board, it’s no wonder many of them have to continue to work, despite their old age and sufferings from age-related ailment.

Some work as cleaners in hawker centres while others work as security guards. Still, some work at Changi airport as cleaners or trolley collectors surprising many tourists visiting Singapore, as their own elderly are typically enjoying the sunset years at home.

Not surprising, there have been reports of Singapore elderly working till they literally dropped dead in their workplace.

For example sometime ago, there was a media report about an 80-year-old dishwasher, Mdm Ho, who died while working at ABC hawker centre in Bukit Merah. She died inside the toilet, sitting on the toilet bowl. 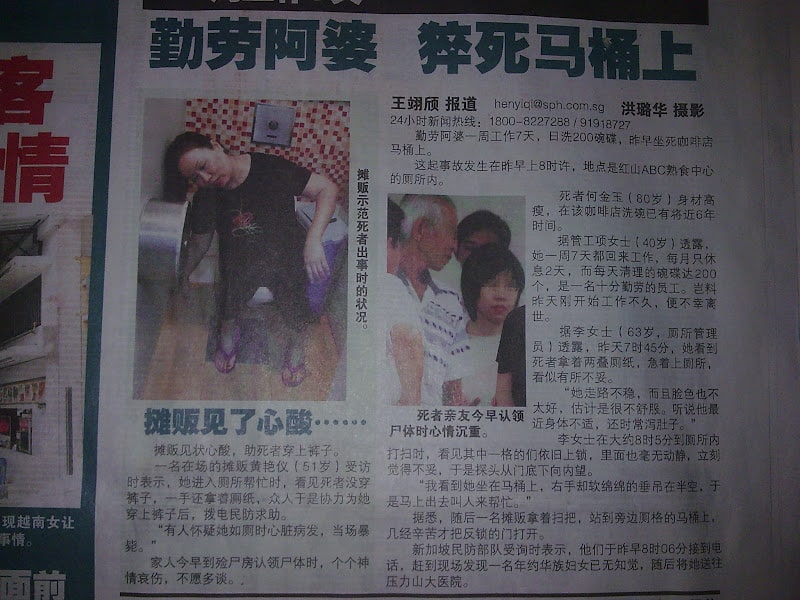 According to the report, Mdm Ho worked daily from morning till night, 7 days a week. She had to wash some 200 dishes a day. She only had 2 days off a month.

“When I saw her yesterday, she was walking unsteadily and appeared pale. I heard she has been having diarrhea for the past few days,” her supervisor said.

It’s not known how much Mdm Ho was receiving (if any) from CPF Board.