The Ministry of Manpower (MOM) announced in a press release on 15 September 2016, that employment growth remained low, while unemployment and redundancies have risen, in the first half of 2016.

MOM states that the statistics reflects the subdued external economic environment, the continued restructuring of the economy, and structural slowing of Singapore’s local labor force growth.

The seasonally-adjusted unemployment rate for residents* rose from 2.7% to 3.0% in June 2016 after declining in March. While on a non-seasonally adjusted basis, the resident long-term unemployment** rate had risen from 0.7% in June 2015 to 0.8% in June 2016. 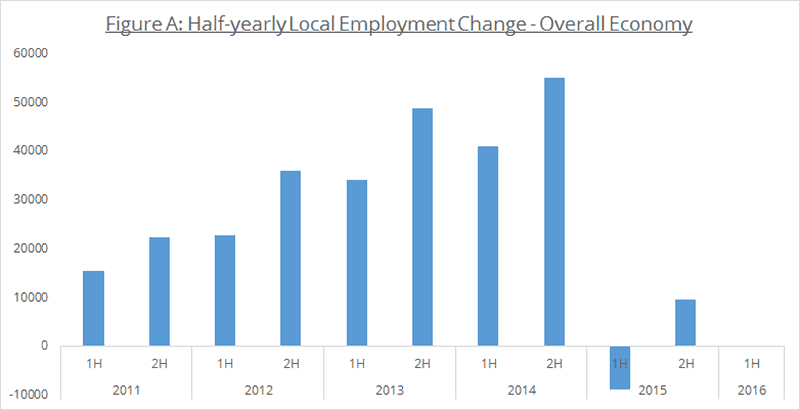 MOM stated that the slower local employment growth since 2015 reflects both structural factors and cyclical effects.

“Structurally, growth of the local working-age population is slowing, due to smaller cohorts of younger locals entering the workforce, and more “baby boomers” retiring. Apart from structural factors, local employment growth since 2015 has been further weighed down by cyclical weakness in the economy due to the subdued global economic conditions, with the impact varied across sectors,” it wrote.

MOM pointed out that for the first term, the declines continued to be mainly in the sectors such as Manufacturing which saw sluggish performance of the transport engineering cluster amidst sustained low oil prices; Retail Trade, on the back of sluggish retail sales (excluding motor vehicles); and Real Estate, amid the lacklustre property market, while local employment continued to grow in the Community, Social & Personal Services and Transportation & Storage.

Increased employment of foreign workers and retrenchment of local workers

As much as 9,300 foreign employment were of Work Permit Holders (WPH), notably in Food & Beverage Services and Administrative & Support Services. A significant number were employed as cleaners, security guards and kitchen assistants.

MOM figures showed that 9,510 were retrenched in the first half of the year. Only 45 percent (around 2,120) of the residents who were made redundant in the first quarter have re-entered employment by June 2016. Meaning around 7,390 residents are still currently unemployed after being retrenched.

Lesser jobs are available in the market as job vacancies fell for the sixth consecutive quarter to 49,400 in June 2016 from 50,000 in March 2016. The decline was broad-based across many sectors and occupation groups.

MOM states that hiring is expected to be cautious in the Manufacturing sector, as well as other externally-oriented services sectors such as Financial & Insurance Services and Wholesale Trade and expects redundancies to continue to rise in sectors facing weak external demand and that are undergoing restructuring.

On the other hand, labour supply will remain tight in domestically-oriented services sectors such as Community, Social & Personal Services and Accommodation & Food Services. Meaning most of the job vacancies will be from these sectors

Overall labor productivity, as measured by value-added per worker, rose by 0.8 percent in the first half of 2016 over the same period last year. This is an improvement from the 0.3% growth in the second half of 2015.

The Ministry of Trade and Industry (MTI) has narrowed the 2016 growth forecast for the Singapore economy to 1.0 – 2.0%, compared to 2.0% growth in 2015. Barring unexpected shocks in the external economy, MOM expects labour demand to remain modest in 2016.

Note that persons are counted as unemployed, if they are not working, but are actively looking and available for work. So if one has given up the search for work after months or years of unemployment, that person is no longer considered as unemployed.