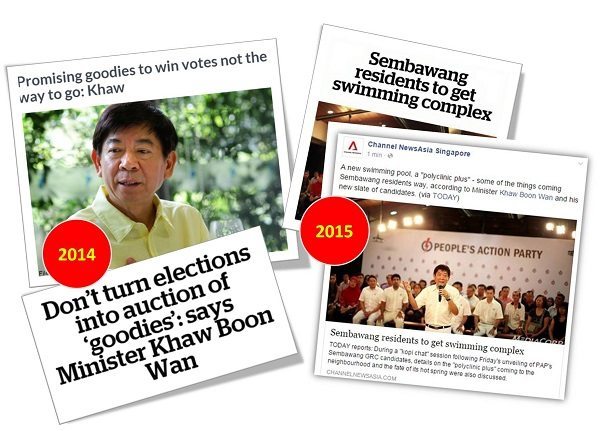 “Your MP is not the Chief Social Worker. He’s supposed to raise issues and make laws.”

That was the headline of an article by the Straits Times’ Opinion Editor, Chua Mui Hoong, on Saturday, 22 August.

Briefly, Ms Chua – who was at the People’s Action Party (PAP) press scrum for the introduction of its candidates for Jurong GRC – was rather perturbed by all the niceties being spewed by the candidates.

“One by one, each candidate spoke about their wish to build a more caring community in Jurong GRC,” Ms Chua wrote.

The would-be parliamentarians rattled off some of the (community) programmes they would introduce if elected.

“I started wondering: Were they standing as Members of Parliament, or angling for posts as Chief Social Worker in Jurong GRC?” Ms Chua said.

Indeed, are our MPs mere do-gooders or santa clauses who are on duty all year round, to be called on to grant whatever wish we have?

And it is not just the PAP Jurong election team which has presented themselves as potential town managers and social workers.

Almost every PAP press conference or media scrum to introduce its candidates is accompanied by promises of upgrading programmes, or new amenities, for the estate.

It has become such that questions have been raised not only about the roles of the MPs, but also if the candidates are not appropriating the work of public servants (such as those in the Urban Redevelopment Authority or the Housing and Development Board) as their own.

This itself would be rather dishonest – to pass someone else’s work off as one’s own.

Did the PAP candidates sit down with these public servants, prior to being announced as the party’s candidates, to discuss these estate plans and programmes?

Or were they just simply regurgitating what the URA or the HDB had already planned for each of their estates?

Another question which has risen is how the PAP itself seems to have u-turned on its own principle, espoused by its chairman just last year.

“National Development Minister Khaw Boon Wan today warned against turning elections into an auction between political parties promising voters as much ‘goodies’ as they can, with as low taxes as possible,” the TODAY newspaper reported Mr Khaw as having said in June 2014.

Mr Khaw was quoted as saying:

“In all honesty, we must acknowledge most of our people would always want more, but would never want to pay more in taxes, and it’s incumbent upon our part to be honest with our voters, because if every election is a mere auction between political parties to give as much goodies as they can with as little taxes they need to pay, I think democracy of that manner must lead to insolvency and eventually, political cynicism.”

Indeed, cynicism has crept in, with regard to the way the PAP has politicised public amenities and programmes.

Here is a look at some of the headlines in the news on the various PAP press conferences to announce its candidates for the elections thus far – with goodies being dished out in abundance (or some may say, with abandon): 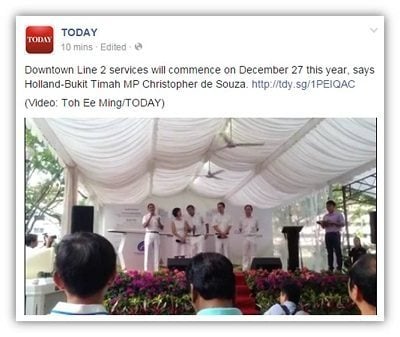 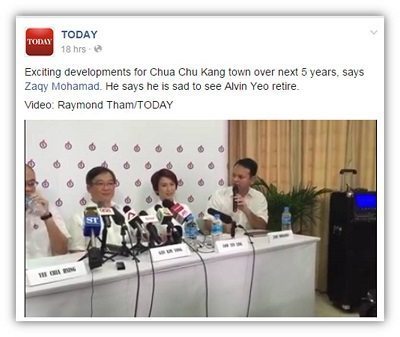 And despite what he himself said last year, goodies were announced by Mr Khaw at his introduction of candidates press conference in Sembawang:

“Your MP isn’t your social worker, although doing social work is a good way to win hearts and minds – and votes,” Ms Chua said in her article. “These programmes also make a genuine, often lasting impact on people’s lives. They are wonderful.

“But your MP should also be your representative in Parliament, championing issues you believe in.”

This is a position taken by most of the opposition parties who say that the fundamental role of an elected parliamentarian is to be just that – a parliamentarian involved in the debate and even the crafting of policies which affect the large majority of people, and also perform its role of making sure policies are enforced fairly, especially with regard to those who may be in the minority. “We are talking about electing people into parliament who can not only run town councils but more importantly make important decisions on matters which affect our daily lives,” Dr Paul Tambyah said last week at the 35th anniversary celebrations of the Singapore Democratic Party (SDP).

“How we live and pay for our homes, how we educate our children, how we pay for healthcare when we get sick, whether we can be assured of a minimum wage or unemployment insurance and whether there will be a level playing field for all workers – local and foreign,” he added.

Dr Paul is widely expected to be a SDP candidate in the upcoming elections.

The PAP, however, insists the opposite – that the primary role of an MP is to take care of the town.

This insistence, of course, is borne out of political expediency – the PAP having charge of most of the constituencies in Singapore and such an emphasis gives it an advantage over the opposition parties.

The PAP has been in control of virtually all constituencies for 50 years.

But the truth is that an MP – even by his very title – is a parliamentarian, and voters should first and foremost regard him as such, and decide if he or she can fulfil this role above all else.

“In the next few weeks before the polls, every candidate aspiring to enter Parliament will stress his willingness to serve and maintain she has a heart for the people,” Ms Chua said. “In many cases, this will be true. But it is not enough.

“Candidates must also articulate their positions on policies, and say what they wish to retain, adapt or see changed.”

We want to look for leaders – and MPs are also leaders in their own way – who have clear vision, who can articulate that vision and inspire the populace, MPs who are brave and forward-looking, who can say, “This way, this is the direction we need to go.”

We do not want yes-men or women who simply regurgitate existing policy positions, which does not lead to new ideas, or progress.

In short, we do not want dead wood in Parliament.

“What do the future leaders of Singapore, whether from the PAP or the opposition, stand for?” Ms Chua asked.

“Or are they  all for the status quo? In which case, Singapore’s future is dim indeed.”

So, the next time you see a candidate who is trying to sell you some municipal estate upgrading programme, do not be afraid to ask his or her views on national policies instead, and decide your vote based on her or his response.

For that is the role of an MP – to lead by having clear ideas of what he or she believes in.

Otherwise, why would you vote for him or her to be in Parliament?

They could work as private town managers or social workers on hire – and save us the hassle of going through the whole electoral process, wasting taxpayers’ time and money.

So, Ms Chua is right – your MP is not a social worker.

He is a lawmaker – and that is his fundamental and most important role.