Two events are being scheduled for Tuesday and Wednesday in Malaysia and in Hong Kong in  support of Singapore teenager, Amos Yee.

Civil society groups in Penang, Malaysia, are organising a rally in Penang Square on Wednesday, 1 July, at 6pm “to remind that Singapore is a party to the UN Convention on the Rights of the Child (CRC).”

“In conjunction of International Day in Support of Victims of Torture, NGOs around the world organised rally to protest against the continued detention of Amos Yee,” the group said on its Facebook page.

The group says it “hopes] the Singapore authorities can respect the regulations of the CRC and release Amos Yee immediately.”

Amos Yee is currently being held, by order of the court, in the Institute of Mental Health (IMH), Singapore, for assessment to determine if he is suitable to be issued a Mandatory Treatment Order (MTO).

He is being held for two weeks there.

The 16-year old had just completed a three-week remand at Changi Prison when he was ordered to the IMH.

During those three weeks, he was assessed for suitability for reformative training (RTC). The psychiatrist who did the review, Dr Munidasa Winslow, concluded that Amos Yee was mentally and physically suitable for RTC, but he also said that the young boy may have autistic spectrum disorder (ASD).

The court then ordered the current assessment at the IMH to confirm this.

In total, Amos Yee has been held, and continues to be held, for more than 40 days in remand, although he has not yet been sentenced by the court for uploading a video on Youtube which the court said “wounded the religious feelings of Christians”.

The video, released on the funeral of Singapore’s former prime minister, Lee Kuan Yew, was critical of the latter, calling him “a horrible person”, and compared him to the Christian religious icon, Jesus Christ.

However, there have been no official complaints or statements from any Christian organisations in Singapore expressing offence at the video.

Instead, a Christian had started an online petition which said that they were “not offended by Amos Yee’s statements”. That peititon has garnered more than 4,500 signatures so far. (See here.)

Another petition calling for the release of Amos Yee has also attracted almost 4,000 signatures. (See here.) 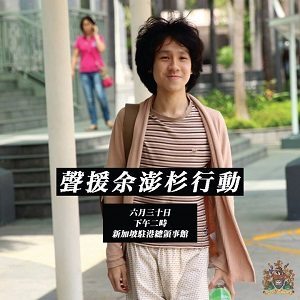 In another show of support from the international community, the Hong Kong University Students’ Union (HKUSU) is organising a petition  “to demand the Singaporean government to release Amos Yee and stop any sentence due to one’s speech.”

Posting on its Facebook page, it noted that the teen is being held at the IMH.

HKUSU said, “Any act of trampling human rights and manipulating the freedom of thought must be condemned.”

The petition is supported by 10 other students’ unions in Hong Kong.

In the past one week or so, several international organisations have spoken up and called for the release of Amos Yee. These included the United Nations, Human Rights Watch, Amnesty International.

“While Amos himself has refused the option of probation, OHCHR appeals to the Singapore authorities to give special consideration to his juvenile status and ensure his treatment is consistent with the best interests of the child, the principle that lies at the heart of the Convention on the Rights of the Child, to which Singapore is a party,” the United Nations Human Rights Office for South-East Asia (OHCHR) said in a statement on 22 June.

Also, a protest was held in Taiwan on Friday in support for the teen, with protesters handing over a letter to an officer of the Singapore consulate there.

And a few days ago, prominent Hong Kong acitvist, James Hon, released a video to add his voice to the call for Amos Yee’s release.

Expressing disbelief at the way the teen is being treated, Mr Hon said, “The boy is only 16!”

“Please, please,” he said, referring to Singapore’s Prime Minister, who is also the son of the late Mr Lee, “do not follow your father’s footsteps. Do not become another horrible person.”

In Singapore, an event is being organised by the Community Action Network group on 5 July at Hong Lim Park to call for the Singapore Government to release Amo Yee. (See here.)