Starting from the next season of the S League, football clubs in Singapore will be limited to hiring five local players who are aged 30 and above.
This was announced by the chief executive officer (CEO) of the S League, Lim Chin, last week.
It was part of a slew of changes which Mr Lim revealed to give the floundering fortunes of the league a boost.
The changes include downsizing the number of teams from 12 to 10 for 2015, and tighter fitness requirements for players.
The restriction on the number of players aged 30 and above which can be hired has raised eyebrows, although some are supportive of it.
The age limit is needed to revitalise the competition, Mr Lim told the press last week.
“The demographic of our league is slightly lopsided… and we’d like to correct the balance a little bit… to inject more youth and talent into the league,” Mr Lim said.
“Once this technical correction has been achieved, we may erase this rule in due course,” he added.
Mr Lim, who was booed last week at an awards ceremony after he announced the changes, also urged support for them, saying, “What is important is that we do good policies that are good for the league… let’s bite the bullet.”
Former Tampines Rovers striker Aleksandar Duric, who hung up his boots last week after a 16-year career in the league, was supportive of the new rules.
“The measures are a little drastic, but we need some changes to the league to move it forward,” he said.
“We will see how the clubs deal with the age restrictions. But this will give younger players a push as they now have a chance to play regularly.”
However, such restrictions mean older players may not be able to apply for the job, or even have their contracts renewed, purely because of their age.
In other words, a player’s place in the team would not be about his ability, but about how old he is.
It is thus no surprise that some, such as 36-year old Zahid Ahmad, are criticising the age cap.
Mr Zahid, who played for Tanjong Pagar United this season, said it should be the coach who should decide if he is worthy of a place in the team, and not “administrators”.
“How can an administrator decide if I am not capable of lacing up my boots and playing with youngsters and foreigners in stadiums across Singapore?” he told the Straits Times.
“It should be for the coach, who sees me at training every day, to decide whether I deserve a contract or not.”
“Yes, the S-League has deep-rooted issues in attracting crowds and sponsors,” he said, “but casting aside the so-called oldies will not solve the problem.”
Another Tanjong Pagar player, 34-year old Sazali Salleh, says he may have to hang up his boots for good because of the age limit.
“I was on a one year contract which means if I want to continue playing I will have to find a new club,” he told FourFourTwo. “But at the moment I think it’s a very slim chance because of the new age restrictions (which will see teams limited to a maximum of 5 players aged 30 and above). Most of the clubs will probably give precedence to the players who have played for them this season to fill the quota. I have to think about finding a job away from football. It is hard to be saying goodbye after so many years.”
The age restriction seems to go against the employment guidelines set by the Tripartite Alliance for Fair and Progressive Employment Practices (TAFEP).
On its website, under “Fair Employment”, it says:

“In Singapore, adopting fair employment practices is about recruiting and treating employees on the basis of merit, such as skills, experience or ability to perform the job. Being fair also means being sensitive and questioning the validity of assumptions if factors, such as age, race, gender, religion, family status or disability are being used in employment-related decisions.”

It then listed “5 principles of Fair Employment Practices”, the first of which was:

“Recruit and select employees on the basis of merit (such as skills, experience or ability to perform the job), and regardless of age, race, gender, religion, family status or disability.”

At a time when the government has been encouraging Singaporeans to work for as long as they could, and with plans to raise the retirement age, along with the calls for employers to not discriminate based on age, the S League’s cap seems anachronistic.
In April 2013, the media reported how some government ministries had put out job recruitment advertisements which stipulated age requirements.
The ministries later withdrew the advertisements, after they were notified of it.
The government has also frowned on recruitment advertisements of job vacancies seeking persons of specific nationalities.
The then Acting Minister for Manpower, Tan Chuan-jin, pledged to tackle such types of discrimination during the BUdget debate in March last year.
“With or without legislation, discriminatory hiring practices have no place in Singapore,” he said. 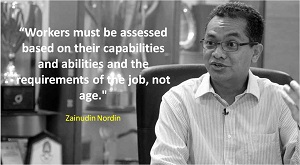 Member of Parliament for Bishan-Toa Payoh GRC, Zainudin Nordin, who heads the Government Parliamentary Committee for Manpower, said then, referring to the oversight by the ministries in their job advertisements:

“If there was an oversight, things must still be put right so that it is fair to older workers. Workers must be assessed based on their capabilities and abilities and the requirements of the job, not age.”

Incidentally, Mr Zainudin is also the president of the Football Association of Singapore.
It is unclear if the S League is, however, exempt from adhering to TAFEP guidelines.
————————-
*Mr Zaunidin also holds the following appointments, among others: