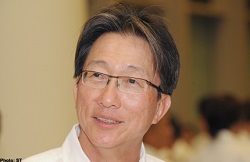 The Deputy Chairman of the People’s Association (PA), Mr Lim Swee Say, has issued a statement explaining why the PA has “uninvited” former People’s Action Party (PAP) Member of Parliament and presidential candidate in the 2011 presidential election, Dr Tan Cheng Bock, from a February party at the Istana.
Dr Tan had posted about the matter on his Facebook page. [See here.] Mr Lim’s statement said he was surprised that Dr Tan was bringing the matter up publicly.
He said:

“Many people serve and contribute to the community. We review and refresh the list periodically to enable a wider base of invitees to attend the reception.
“The most recent review was conducted a few months ago. Instead of inviting all ex-advisers to grassroots organisations repeatedly for 20, 30 years or even longer, we decided to limit the list to only ex-advisers who stood down in the immediate past general election.
“It is most unfortunate that PA made the mistake of using the old list instead of the updated list. We are sorry for the error, and this is why I phoned Mr Tan and the other affected invitees personally to explain the mistake, and followed up with personal emails to apologize again.
“I was heartened that Mr Tan very graciously accepted my explanation over the phone. So I am surprised that he now brings this up publicly as an issue.”

Dr Tan has explained that he decided to post the matter on his Facebook page because many grassroots leaders had asked if he would be attending the event.
—————
In 2011, Workers’ Party MP Chen Show Mao was also “uninvited” by the grassroots organisations in his ward after having been invited to a grassroots event. According to a news report then:

Workers’ Party (WP) MP for Aljunied GRC Chen Show Mao explained on his Facebook page yesterday that he had been scheduled to attend such a dinner last week, but the organisers had called to let him know that they could not have him show up as originally hoped.
Grassroots leaders are often invited to such dinners, held as part of the Chinese Hungry Ghost Month celebrations.
In this case, organisers had – according to Mr Chen’s post – been told by the Paya Lebar CCC (Citizens’ Consultative Committee under the People’s Association) that, as a condition for receiving CCC approval to use a planned venue in the HDB estate, they “may no longer” invite the Aljunied opposition MPs.