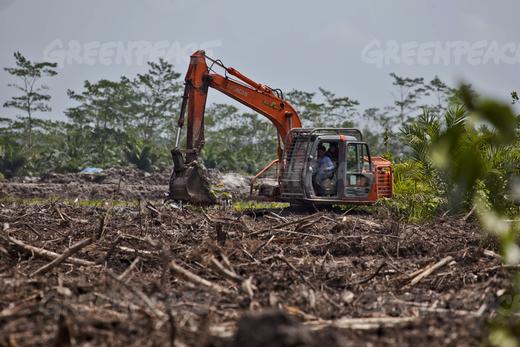 Jakarta, 22 November 2013 – A supplier to Singapore-based palm oil trader Wilmar International has been caught carving up peatland forests that are home to endangered orang-utans, in rare photos from a recent flyover investigation in Kalimantan by Greenpeace Southeast Asia.

The company owning the plantation, Bumitama Agri, today denied that it has “destroyed forest or killed orang-utans”, but promised that it would halt all planting in response to pressure from NGOs including Greenpeace and from its customers.

“Only last week, Greenpeace has again caught a supplier to Wilmar in the act of carving up forests that are critical habitat for orang-utans beside an internationally renowned national park. For more than 6 months, global NGOs have been pushing for this company to stop its destructive practices, but on the ground the clearing continued and the orang-utans inside their concessions suffered,” said Bustar Maitar, head of the Indonesia forest campaign for Greenpeace International.

“This company has done too little too late. If this is what sustainability looks like, then consumers have every right to demand guarantees that Wilmar stop laundering palm oil from forest destruction to the global market,” said Bustar Maitar, head of the Indonesia forest campaign.

“Greenpeace wants urgent confirmation from Bumitama that all land clearing has stopped, and that Bumitama is committing to full forest and peatland protection in all its concessions. Until Bumitama commits to a No-Deforestation policy, the orang-utans and forests in their concession remain at risk,” said Bustar.

Bumitama has made and broken such promises before, claiming to have stopped development in one concession in early 2013 after the discovery of numerous orang-utans stranded in remaining forest areas. However, Greenpeace mapping analysis exposed that the company cleared over 1,150ha in this one concession in 2013.

The palm oil sector is the greatest single cause of deforestation in Indonesia. Ministry of Forestry maps show that Indonesia is losing some 620,000ha of rainforest every year (an area greater than the size of Brunei). A quarter of the loss over the period mid-2009 to mid-2011 was in Central Kalimantan, home to the internationally renowned Tanjung Puting National Park. Tanjung Puting contains one of the largest remaining orang-utan populations.

Singapore-based Wilmar International is the world’s largest palm oil processor, accounting for over one-third of the global palm oil processing market and is a cornerstone investor in Bumitama Agri.

For just US$7.50 a month, sign up as a subscriber on The Online Citizen Asia (and enjoy ads-free experience on our site) to support our mission to transform TOC into an alternative mainstream press.
Tags: conservation