Singapore’s team represented by PRC born Feng Tianwei, Yu Mengyu and Lin Ye lost to the Chinese team 3-0. In the first match, Singapore’s Lin and Yu went down in 23 minutes in losing 3 games consecutively. In the second match, Feng also went down in 3 straight games. In the third match, Lin won the first game but lost the next 3. This gave the Chinese team an overall 3-0 victory win against Singapore in the team event.

In response to the loss, Straits Times (ST) journalist David Lee write an article yesterday (4 Aug) calling for Singapore to “bite the bullet” and continue to recruit foreign talents so as to achieve future Olympic success.

Lee argued that Feng and Yu are nearing the end of their careers and are unlikely to play at the next Olympics. He noted that the Singapore’s women’s team has won medals in the past – a “historic silver” at Beijing 2008 and two bronzes in the team and single events at the London Olympics.

“World No. 10 Feng turns 35 on Aug 31, while 31st-ranked Yu will be 32 in two weeks. Yu, with her long history of injuries, has confirmed that she will not participate in the next Olympics,” Lee pointed out.

“Their impending departure from the national set-up will leave a huge gap for the STTA, putting pressure on it to restart its foreign talent recruitment if Singapore is to remain competitive at the elite level and challenge for medals at the Olympics.”

Lee further argued that other teams are also using foreign talents. He noted that one third of the 42 players from non-Chinese territories competing in the women’s team event in Tokyo were all hailed from China, although majority weren’t.

“The STTA has gone down this (foreign talent policy) path before to great success,” Lee said referring to STTA’s own success in the recruitment of PRC talents like Li Jiawei, Wang Yuegu and Feng.

He lamented that Singapore’s men’s team, with no foreign talents, did not even qualify for the team event this time. “The effects of a Singapore core can be seen in the men’s team,” he said. “Singapore reached the men’s team quarter-finals at London 2012 with the China-born trio of Gao Ning, Zhan Jian and Yang Zi.”

“Without fresh (foreign) recruits, the STTA will likely see a drop in high-performance results and this has a knock-on effect.”

With dismal performance, it could impact funding and support from the authorities and sponsors, and further compromise STTA’s ability to groom promising players, he explained.

As for the critics of foreign sports talents, Lee thinks that they remain a minority in Singapore.

“All things considered, it might be best for the STTA to persist with its foreign-talent policy before the embers are extinguished, and be unapologetic in its Olympic medal quest,” he concluded.

It remains to be seen if critics of foreign sports talents only form a minority as believed by Lee. Meanwhile, online, many netizens continue to feel that they were watching Chinese players playing against Chinese players in the team event, despite Feng, Yu and Lin are naturalized Singaporeans. 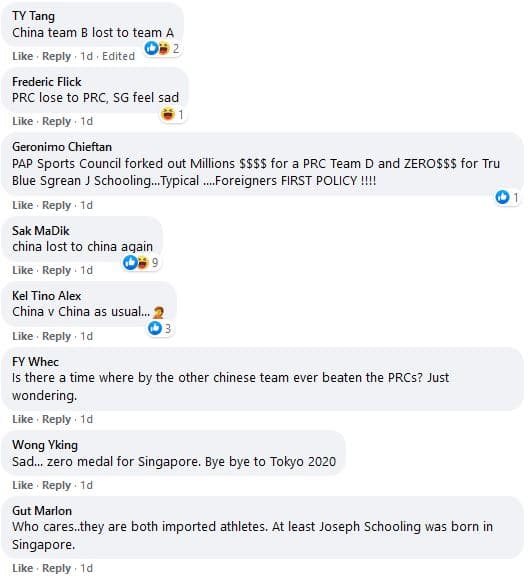 One netizen, Ando Chon, even asked, “Where is Li Jiawei by the way, after ‘winning for Singapore’ the silver medal group Table Tennis event? The last I heard she went back to China to be with her businessman husband.”

“What a slap to the faces of the people here who once said we shouldn’t view her as Made in China but a Singaporean.”

Indeed, Li married a PRC businessman and decided to retire in Beijing bringing along her Singapore-born son after winning the silver medal at Beijing Olympics (‘Hard for Li to say goodbye‘).

Singapore sporting arena and its young athletes do benefit from the experience of seasoned sportsmen and women from foreign countries. But if we use Joseph Schooling’s success story where his achievements come as a result of the sacrifice made by his parents as a contrast and example, we have to ask if Singapore spending enough and willing to nurture local athletes whether local or naturalised?

Or is Singapore stuck on a “business model” to buy off-the-shelf athletes for a potential medal at the Olympics?