Renewed political instability, most notably in the collapse of the reformist Pakatan Harapan government elected in 2018, coupled with the state of Emergency have “reversed hopes” for improved media freedom in Malaysia, according to findings by the Digital News Report 2021, released on Wednesday (23 June).

The 10th edition of the report, published by the Reuters Institute for the Study of Journalism based on a YouGov survey of over 92,000 online news consumers in 46 markets, studied digital news consumption during the COVID-19 pandemic.

It also examined common issues in digital news such as trust and misinformation, paid online business models, and fairness in news coverage.

Malaysia is part of the list of countries in the Asia-Pacific region, among others such as Singapore, Indonesia, Thailand, the Philippines, Hong Kong, Taiwan, South Korea, Japan, Australia, and India.

In his analysis for the report, Zaharom Nain, a professor of Communication and Media Studies at the University of Nottingham Malaysia Campus observed that the suppression of not only dissenting voices, but even of journalists and other media professionals in carrying out their reporting duties, has been a running theme in the “hastily assembled” Perikatan Nasional (PN) coalition’s governance so far.

He cited the police’s move to investigate those behind an Al Jazeera documentary, “Locked Up in Malaysia’s Lockdown”, on the arrest of undocumented migrant workers and to summon South China Morning Post journalist Tashny Sukumaran for questioning over her reports on such arrests.

Professor Zaharom also cited police investigations and detention of graphic artist Fahmi Reza for satirising the country’s Queen and cartoonist Zunar under the Sedition Act, the Penal Code, and the Communications and Multimedia Act (CMA).

Fahmi was also investigated in March for a tweet made in October last year allegedly parodying Health Minister Adham Baba.

Captioned as “Please find a missing minister!” in block letters, the tweet showed a caricature with the minister’s nametag, likely satirising Dr Adham’s “absence” from the public eye with regard to the government’s efforts in combating COVID-19.

Zunar was investigated for “mischief and abuse of the internet over a caricature” of the Chief Minister of the state of Kedah.

Most recently, activist Aiman Hakim was arrested and investigated by the police under the Sedition Act and the Communications and Multimedia Act for a tweet dated 31 May, in which he branded the Malay rulers and royals as serving “no function” in the country.

His lawyer Rajsurian Pillai told reporters on Wednesday that the magistrate had rejected the police’s bid to place Aiman under a four-day remand, allowing the activist to only be held for a day instead.

“ In April, both were summoned by the Home Ministry over ‘unfavourable’ – albeit accurate – reports about a careless statement on rape made by the Deputy Inspector General of Police,” said Professor Zaharom.

Beyond clamping down on the work of journalists and activists, the Emergency has given PN “exceptional powers over the media”, the academician observed.

An “arsenal of draconian legislation”, spearheaded by the Sedition Act and CMA, paved the way for PN to issue the Malaysian Emergency (Essential Powers) (No. 2) Ordinance 2021 on 12 March this year, intended to curb misinformation related to the COVID-19 pandemic.

Rights groups such as ARTICLE 19 have voiced their concerns over the ordinance, stating that the ordinance simply “revives the draconian provisions of the Anti-Fake News Act 2018” that was repealed by Parliament in October 2019.

“The Ordinance significantly threatens freedom of expression in Malaysia at a time when more information and scrutiny by the media and civil society is paramount. During a public health emergency, open and transparent media can save lives,” said ARTICLE 19.

Provisions stipulated in the ordinance creates criminal liability for anyone who writes, reports or publishes anything relating to the pandemic or the proclamation of emergency that is at least ‘partly false’ and may ‘cause fear or alarm’ to individuals, including government officials, it added.

ARTICLE 19 also noted that the ordinance creates criminal liability for media organisations, social media platforms, and civil society organisations who may host content or otherwise support or provide other financial assistance for that content, both domestically and outside Malaysia.

Police also gain “broad” and arbitrary powers to arrest individuals under the law without a warrant and cause takedowns of content “without meaningful due process or allowing an opportunity for the respondents to defend themselves”, ARTICLE 19 added.

Professor Zaharom in his analysis highlighted that amid the growing fragility of the PN government and a general election that is likely to ensue in 2022, political figures “have again stepped in to own and control the Malaysian media environment” by giving financial backing to media outlets.

“Two years ago, Media Prima was bleeding financially for economic and technological reasons. But the past year or so has seen a revival of its fortunes due to the fresh injection  of funds by prominent Malaysian tycoon, Syed Mokhtar Al-Bukhary,” Professor Zaharom added.

While most online portals still provide free access, some such as The Malaysian Insight have “followed the path set by Malaysiakini of adopting a subscription-based model”, Professor Zaharom said.

“Most online portals still provide free access, although some, like The Malaysian Insight (TMI), have followed the path set by Malaysiakini of adopting a subscription-based model.

The seismic changes in Malaysia’s political landscape in the past year were catalysed by the collapse of the PH government after the ‘Sheraton Move’ took place.

The ‘Sheraton Move’ derived its name from the Petaling Jaya hotel in which a meeting among leaders from the Malay-centric Parti Pribumi Bersatu Malaysia — which is now led by Prime Minister Muhyiddin Yassin — and PKR attempting to form an alliance with Umno and other parties in a bid to establish a new government.

Muhyiddin took the mantle of Prime Minister from former premier Mahathir Mohamad following a power vacuum left by the latter’s resignation from the post.

PH had earlier wrested power from Najib’s Barisan Nasional administration in 2018, particularly after the former premier became mired in controversy over his alleged abuse of state fund 1Malaysia Development Berhad, among others.

BN governed Malaysia for 61 years since the nation’s independence prior to the 2018 general election.

The Reuters Institute for the Study of Journalism found that from 2017 to 2021, online means — including social media — appear to be the most popular news source among respondents in Malaysia. There has been a two per cent increase in the preference for such means, from 86 per cent in 2017 to 88 per cent in 2021.

Print media emerged the least popular among all of the sources listed, with a steep decline from 45 per cent in 2017 to 24 per cent in 2021. 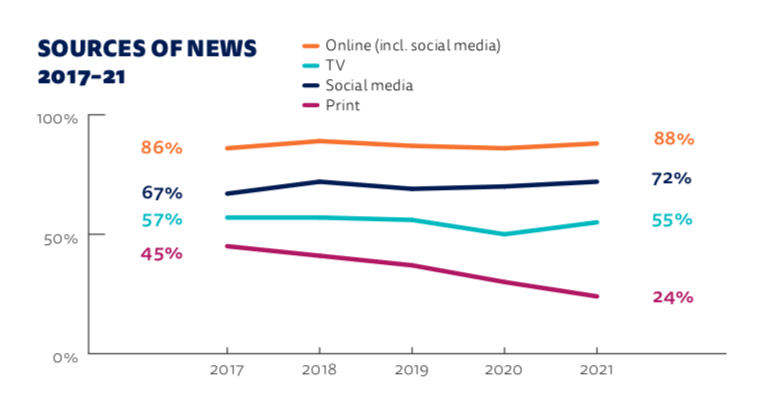 24-hour news channel Astro Awani topped the list of news brands in Malaysia in the survey, which the Reuters Institute for the Study of Journalism said can be attributed to its “innovative and often critical news and current affairs programmes”.

Overall, trust in media outlets in Malaysia “has increased considerably” in contrast with the past couple of years, as the COVID-19 pandemic and the subsequent lockdowns “have resulted in greater dependence on main news sources” for reliable information on the coronavirus.

Telegram and Twitter were ranked the least popular platforms through which news is shared at 20 per cent and 16 per cent respectively.

Due to their portability and ease of access, mobile phones remain the most popular devices on which news is accessed in Malaysia, showing a marked increase from 65 per cent in 2017 to 85 per cent in 2021. 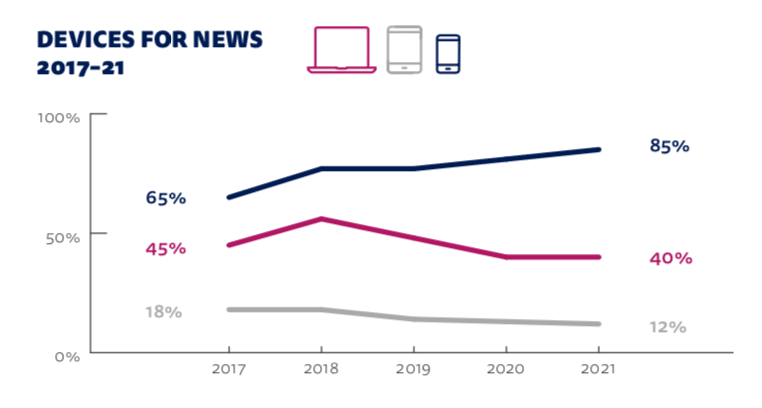 On a wider scale across all the markets surveyed, the Reuters Institute for the Study of Journalism found that the use of smartphones for news has grown at its fastest rate for many years, with 73 per cent heavily relying on their mobile phones throughout COVID-19 lockdowns in multiple countries.

“Use of laptop and desktop computers and tablets for news is stable or falling, while the penetration of smart speakers remains limited in most countries – especially for news,” the institute found.

In terms of overall trust in the news across markets, the Reuters Institute for the Study of Journalism found that trust in the news has grown, on average, by six percentage points in the wake of the pandemic.

44 per cent of respondents said they trust most news most of the time, according to the institute.

“This reverses, to some extent, recent falls in average trust bringing levels back to those of 2018. Finland remains the country with the highest levels of overall trust (65%), and the USA now has the lowest levels (29%) in our survey,” said the Reuters Institute for the Study of Journalism.