KUALA LUMPUR, MALAYSIA — In the wake of a public petition calling for his resignation, Pasir Salak Member of Parliament Tajuddin Abdul Rahman was sacked from his position as non-executive chairman of state-owned transport firm Prasarana on Wednesday (26 May).

In a letter to Tajuddin on Wednesday that has since been widely circulated online and which was confirmed by the Ministry of Finance (MOF), Finance Minister Tengku Zafrul Abdul Aziz said that the termination will take effect immediately.

Prasarana is under the purview of MOF.

Responding to queries from Malay Mail regarding his termination as Prasarana chairman, Tajuddin, however, said on Wednesday evening that he has yet to receive an official letter stating so. News on Tajuddin’s termination came on the heels of a petition on Change.org titled #LetakJawatanTajuddin or #ResignTajuddin after his “failure and lack of sensitivity and empathy” in handling the aftermath of the recent Light Rail Transit (LRT) train collision, which resulted in 47 commuters suffering serious injuries.

“His arrogant behaviour was evident during a press conference following his visit to the scene of the collision. This is on top of his racist remark towards a Chinese journalist,” the petition statement read.

During the press conference, Tajuddin was seen asking a Phoenix TV correspondent: “Where are you from?” He then said, “No wonder lah” after the correspondent replied “China”.

Tajuddin: Where are you from?

The petition statement also pointed out that Tajuddin had breached COVID-19 standard operating procedures by only wearing a face shield and not donning a face mask.

“The Royal Malaysia Police and the Health Ministry must take stern action against Tajuddin,” it added.

It is understood that police are currently investigating Tajuddin over the matter. 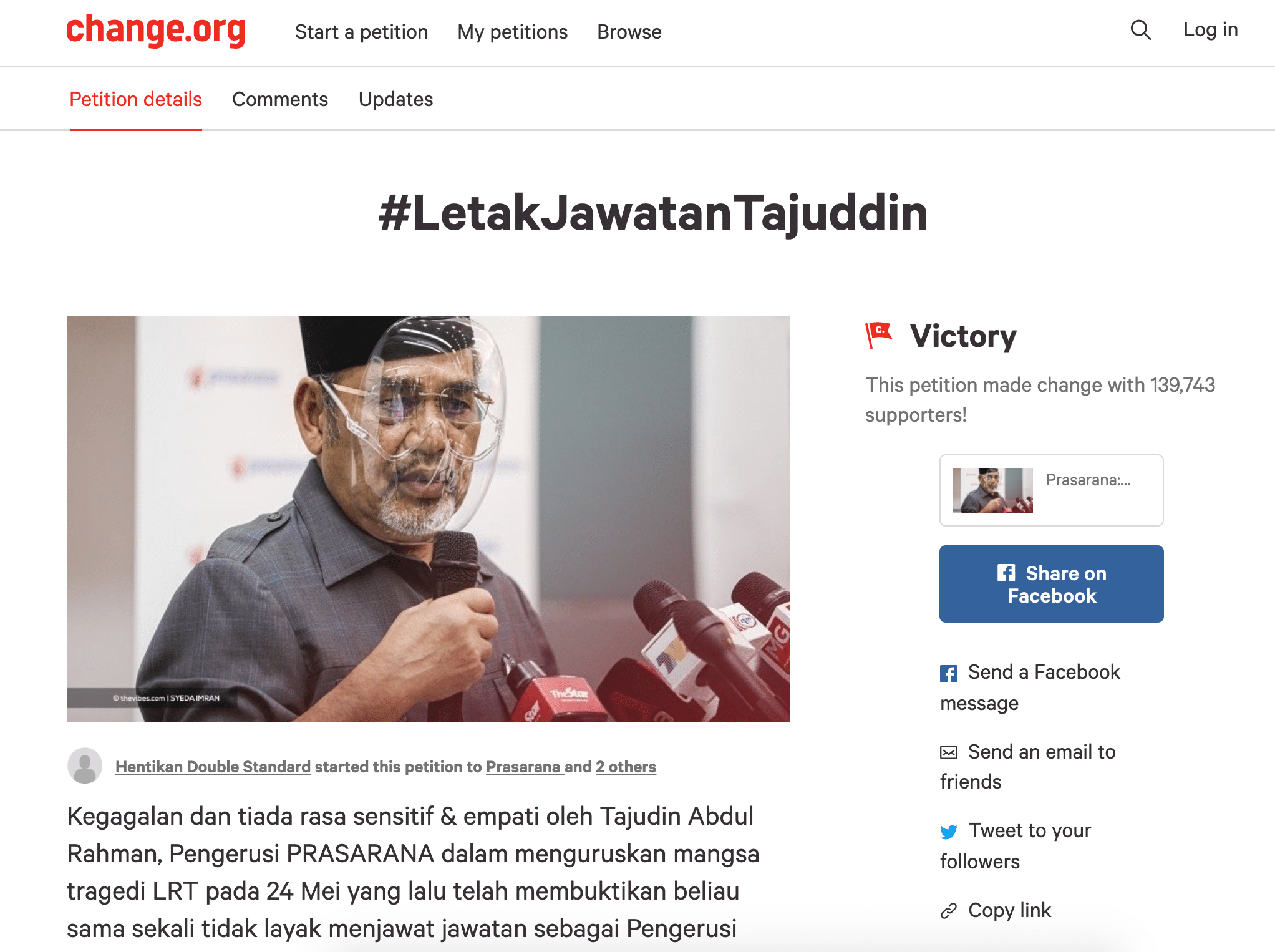 Tajuddin had earlier stated that Prasarana will be offering a RM1,000 compensation package to those affected — a sum that was criticised by many as an inadequate amount vis-à-vis the injuries and trauma sustained by victims of the accident.

Additionally, Tajuddin said that the company will “cover their medical expenses from the day they are admitted until they are discharged”.

Prasarana will also be footing the cost for those who had lost their income due to the accident.

Transport Minister Wee Ka Siong told reporters on Wednesday that a total of 67 people were treated at Kuala Lumpur Hospital.

61 of them had been discharged, while six people remain hospitalised. Three are in critical condition, he noted.

Under regular service, trains on the Kelana Jaya line are fully automated. However, at the time of the crash, one of the two trains — which was empty — was under a manual test run.

Touching on the train driver involved in the incident, who has since been suspended from work following the collision, Wee said that police had conducted a drug test on 25 May, which turned out to be negative.

“This person must be allowed the opportunity to be heard in order to facilitate the investigation without premature judgments,” said the minister.

Earlier on Monday, Wee said that a task force will be convened to look into the incident, said Wee. A full report on the investigation will be presented in around two weeks.