E-vaporisers and accessories seized from the residences (Source: HSA).

Officers of Immigration & Checkpoints Authority (ICA) at Changi Airfreight Centre intercepted a consignment of 31 parcels containing 27 sets of electronic vaporisers (e-vaporisers) and 400 pieces of related accessories, which are prohibited in Singapore, on 9 September 2019 at about 1 pm.
In a joint press release on Wednesday (18 September), ICA and Health Sciences Authority (HSA) revealed that suspicions were aroused when anomalies were observed in the scanned images of the parcels.
The HSA was then alerted and conducted further investigations.
The authority then conducted house searches of the consignees on 12 and 13 September and seized additional sets of e-vaporisers and accessories, bringing the total number seized by the authorities to 63 sets of e-vaporisers and 2,368 e-vaporiser accessories, with a street value of $29,460. 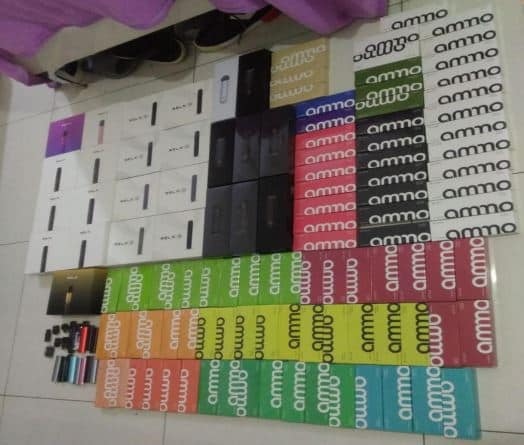 Eleven suspects are currently assisting HSA in investigations, it stated. The suspects had made online orders of e-vaporisers from overseas sellers in an attempt to evade the law by declaring them as toys.
HSA stressed that it takes a serious view on the smuggling and peddling of e-vaporisers and will continue to clamp down on such activities.
Ground operations conducted by HSA from January to August 2019 had put a stop to the illegal activities of 43 such peddlers operating in Singapore.
HSA added that it will continue to work closely with ICA through online surveillance and strict border checks to curb the smuggling and peddling of such products.
The authority stated that offenders can be fined up to $10,000 or jailed up to six months or both.  The use, purchase or possession of electronic vaporisers is also an offence, punishable with a fine up to $2,000.
The authority also encouraged members of the public who have information on the illegal importation, distribution or sales of e-vaporisers to contact the Tobacco Regulation Branch at Tel: 6684 2036 or 6684 2037 during office hours (9:00 am to 5:30 pm, Monday to Friday).
The authorities also stressed that the public should not purchase any e-vaporisers, including through the Internet, to be brought into Singapore and should also refrain from using e-vaporisers and discard any e-vaporisers they have in possession.
Singapore took its first legal step towards raising the minimum smoking age from 18 to 21 in 2017. The Bill to amend the Tobacco (Control of Advertisements and Sale) Act was also made it illegal for people to own imitation tobacco products such as e-cigarettes.