Many older people in Singapore would like to work longer, according to findings from two separate surveys by the Centre for Seniors (CFS) on Wed (21 Aug).
One survey found that around a quarter out of 400 surveyed expressed a wish to continue working in their current jobs, while another survey found that more than half of those surveyed said they would like to continue being in full-time employment.
CFS executive director Lim Sia Hoe told The Straits Times that not knowing how to seek and secure suitable job opportunities, however, has posed as a hindrance in older workers staying employed for longer in the Singapore workforce.
“Older people say they want to work longer but they do not know how to and what jobs are open to them. There can be mismatches between jobs and older workers because these staff can have certain requests, such as leaving work early.
“They require life coaching so they know where to go and what resources are available. They also need to know themselves and adjust their expectations,” he added.
In a bid to assist older workers staying in or returning to the workforce, CFS has set up initiatives such as the LifeWork course to guide older workers with their work-life transition and an online job portal called Silverjobs.sg to match them with suitable jobs across multiple industries, according to CFS Chairman Tan Kin Chew in the CFS annual report last year.
Tan, who spearheads the non-profit organisation, is formerly the chief executive officer of the National Trades Union Congress (NTUC). CFS’ institutional members also appear to comprise multiple NTUC entities such as NTUC Fairprice Co-operative Ltd, NTUC First Campus Co-operative Ltd, NTUC Foodfare Co-operative Ltd, NTUC Income Insurance Co operative Ltd and NTUC LearningHub Pte Ltd.

Previously, Manpower Minister Josephine Teo said that Singaporeans have demonstrated a desire “to keep working and save more”.

Responding to a query by Nee Soon Member of Parliament Lee Bee Wah regarding the Central Provident Fund (CPF) withdrawal eligibility age, Mrs Teo posited that “the introduction of re-employment legislation in 2012” has “made it possible for many Singaporeans to work beyond the age of 62”.

She suggested that lowering the CPF payout eligibility age would be unfair to Singaporeans who want to continue working at a later age in order to receive greater payout sums from age 70 onwards.

The Government will also raise the ages of retirement and re-employment for Singaporeans up to 65 and 70 respectively by 2030, said Prime Minister Lee Hsien Loong.
Speaking at the National Day Rally at ITE College Central in Ang Mo Kio on 18 Aug, Mr Lee said that the age thresholds will be gradually raised – the retirement age will be raised from the present 62 to 63 in 2022, before being lifted to 65 by 2030.
The re-employment age, he added, will be increased from the current 67 to 68 in around three years from now, and will “eventually” be raised to 70 by 2030.
Calling it a “sensible” proposal, Mr Lee said that the decision was made following meetings with the Tripartite Workgroup for Older Workers, a workgroup set up by the Ministry of Manpower (MOM), in a bid to “support older workers and the businesses that employ them”.
“Last year, the Ministry of Manpower, MOM, set up a Tripartite Workgroup on Older Workers to study the issue. I met the Workgroup members last month for lunch. They told me they had had intense discussions. Even at lunch, the discussion was quite intense. Why? Older workers wanted to be certain of continued employment for longer. When can I retire later? Can I be reemployed longer? Can I be reemployed more years at a time?
“But employers were worried about business costs and the uncertain economic outlook, and they said “I support you, I understand your aspirations, but I need more flexibility. Because I do not know what will happen. If I go broke, your job is gone too.” In the end the Workgroup reached consensus,” he said.
“Most seniors in fact do not want to stop working,” he said, adding that the changes introduced by the Government “will support older workers to continue working longer and to be more financially independent”.
Elderly Singaporeans forced to work longer out of necessity? CPF Basic Retirement Sum insufficient in meeting estimated minimum of $1,379 a month for basic expenses, according to LKYSPP data

Meanwhile, the Lee Kuan Yew School of Public Policy (LKYSPP) at the National University of Singapore earlier in May published findings from its survey of over 100 participants, among which was that elderly Singaporeans aged above 65 years old will require at least S$1,379 a month for basic expenses such as personal care items.
Leisure and cultural activities were also included in the category of such expenses, as participants agreed that basic needs go beyond subsistence.
The expense is higher for couples at a minimum of S$2,351 per month.

Elderly Singaporeans in the age bracket of 55 to 64 years old will need a minimum of S$1,721 per month.

Despite a projected increase in Central Provident Fund (CPF) participation and savings with future cohorts, the basic retirement payment of less than S$800 is only about half of the household budget for a single elderly person, the study found.

Under the very Basic Retirement Sum (BRS) scheme, members can only obtain a monthly payout of S$730 to S$790 per month at age 65 onwards.
The BRS scheme also presumes that an elderly CPF member would set aside S$88,000 in their Retirement Account at 55 with a property pledged, as seen in the CPF Retirement Booklet, which was published by CPF Board early this year: 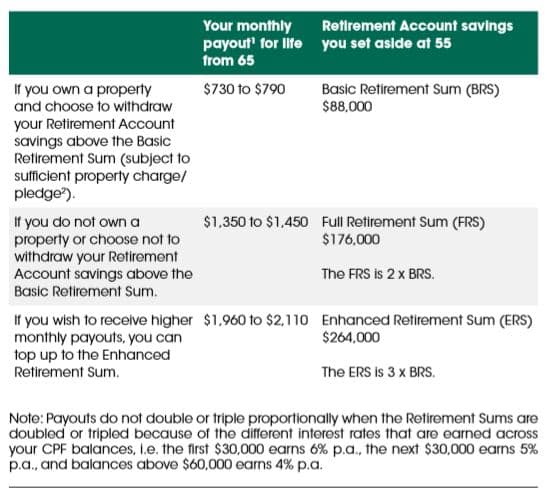 Manpower Minister Josephine Teo also revealed, in response to a question posed by Nominated Member of Parliament Associate Professor Walter Theseira in Feb this year, that around 74 per cent of elderly CPF members are receiving monthly payouts below S$500.

On average, according to the breakdown above, many elderly CPF members are receiving only about S$300-400 a month of payout, which is around 25 per cent of the minimum S$1,379 required per month.

In his National Day Rally speech this year, Mr Lee said that the Government will increase CPF contribution rates for older workers starting 2021, and will not amend the current CPF withdrawal policies or minimum age threshold.
“Today, CPF contribution rates for workers begin to taper down after the workers turn 55. We will raise the rates for workers above 55. We will take the first step in 2021. And we will take subsequent steps after that.
“The whole process will take 10 years or so, about there, but it depends on economic conditions. By the time we are done, those 60 and below will enjoy the full CPF rates. The CPF rates will only begin to taper down after 60, and level off after 70. So this is the first change – to increase CPF for older workers gradually over the next 10 years or so,” he said.
The Institute of Policy Studies recently released a report calling for CPF contribution rate for older workers starting from ages 55 to be restored from 26 per cent to the same levels as younger workers at 37 per cent.
The current CPF contribution rate for workers aged 60 to 65 is 16.5 per cent, while the rate for those older than 65 is 12.5 per cent. The report’s suggestion includes increasing those to 37 per cent as well.
When asked if such proposals to increase the CPF contribution rates are feasible through negotiations and discussions, NTUC Secretary-General Ng Chee Meng, in an interview with CNA938 on 15 Aug, simply noted that the CPF rates are a subtopic for the tripartite work group and that there would be a formal report “sometime soon”.

Employment rate for the elderly has jumped over 15 percent in last decade: Reuters
The seemingly minuscule CPF monthly payouts as seen above appears to be the real reason why elderly Singaporeans have to continue working or return to the workforce despite their old age and age-related ailments, in order to cope with rising living costs.

Reuters reported in Feb this year that the employment rate for people over 65 have jumped over 15 percent in the past decade, making it a third of Singaporeans in the age demographic.
An example of such is 71-year-old cleaner Mary, who told Reuters that “the government’s retirement saving scheme doesn’t provide her with enough money”.
“I have to keep on working until the end of my life,” Mdm Mary lamented. “What to do, no choice. I have to struggle for it.”