It has been reported that a Chinese pharmaceutical billionaire Zhao Tao who got his daughter into Stanford University with the help of US$6.5 million payment turns out to be a new citizen of Singapore, holding a Singapore passport.

He was reported to have paid the money to college counselor William Singer, to help secure his daughter’s admission into Stanford. She was expelled from Standford in March after the University discovered that her application contained falsified sailing credentials linked to a dubious payment to the University’s sailing program.

Singer himself has admitted to masterminding the largest college-admissions cheating ring in the US ever prosecuted by the U.S. Department of Justice. The scandal involves more than 50 people, including four Stanford affiliates and 11 Bay Area parents. He has pleaded guilty to racketeering and other charges, and has cooperated with the US government in gathering evidence against his clients and others he is said to have worked with. The Stanford sailing head coach involved in Zhao’s daughter case has also been charged. He pleaded guilty to racketeering in collaboration with Singer.

Zhao Tao is the president and co-founder of Shandong Buchang Pharmaceuticals, a drug company that specializes in traditional Chinese medicines and health supplements. He started the company with his father Zhao Buchang in 1993, and it has become a family enterprise, employing his brother, wife and elder daughter.

A profile in Forbes lists Zhao Tao’s net worth as US$1.8 billion and describes him as a citizen of Singapore. It also said he received an M.B.A. from Fordham University. The family’s company is listed publicly in Shanghai and according to its filings with securities regulators, Zhao Tao did acquire Singaporean citizenship.

In a statement released by the company, Zhao said, “The arrangements for my daughter’s studies in the United States are a matter for me and my family, and the source of the funds has nothing to do with Buchang Pharmaceuticals, and will not have any impact on the financial situation of Buchang Pharmaceuticals.” 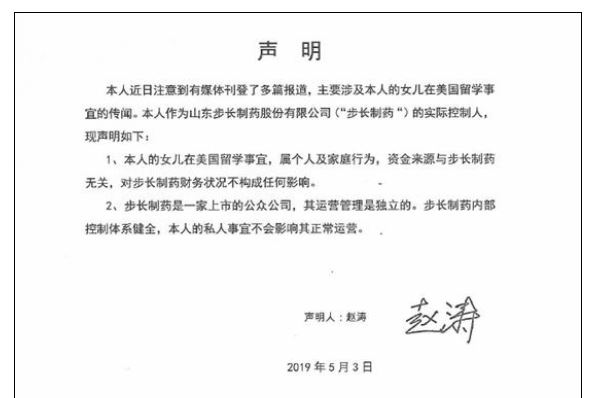 
Zhao’s father, co-founder of the company, was himself at one point accused of bribery. He was found by Chinese prosecutors to have paid bribes in 2002 to the head of the State Food & Drug Administration of China, Zheng Xiaoyu. Zheng was sentenced to death for corruption in 2007 and was executed on 10 Jul 2007.

His father was named among the executives of eight drug companies that bribed Zheng. In Zheng’s public confession, he said:

Inspired by the policy that honest confession should be rewarded lenient punishment, I have overcome all sorts of wrong excuses and honestly confessed to the Party the fact that I accepted bribes from [pharmaceutical executives] Ge Mengya, Wang Maoxing, Du Lihua, Zhao Buchang, Xu Rongxiang and Fan Minhua; that I knew that Zheng Jun, Yu Wenyong, Wang Xianyu had given bribes [to my wife and son].

I am willing to promise to the Party again that I will help retrieve every penny. If what has been retrieved doesn’t match the amount [I accepted in bribes], I’ll sell my own assets and borrow money from family and friends to make it up. I will also cooperate with the [Supreme People’s] Procuratorate Court to clarify the problem, and strive for lenient punishment. I hope the Party will give me the opportunity and a way out.

The Panama Papers and the Paradise Papers — troves of millions of documents which highlight money transactions involving offshore financial entities — provide some detail on transactions involving the Zhaos, including a financial entity registered in Bermuda to Xiaohong Zhao. Xiaohong is Zhao Tao’s wife, according to multiple Chinese publications.

Another entry lists Zhao Tao as a shareholder of China Dream Capital, which is described on its website as a “boutique investment bank.” The organization’s website also states that it advised a transaction involving Chinese environmental energy company BCCY and Sequoia Capital, the prominent venture capital firm headquartered in Menlo Park.

In any case, it’s not known how giving Zhao Tao a Singaporean citizenship by the Singapore government has benefitted Singapore and Singaporeans at large.

Perhaps the PM-in-waiting Heng Swee Keat who has asked Singaporeans to welcome foreigners with open arms should explain how Zhao Tao has contributed to Singapore in order to justify giving him the most powerful passport in the world – the Singapore red passport.