Multiple debates and criticisms have sprung regarding the Protection from Online Falsehoods and Manipulation Bill following its introduction in Parliament on Monday (1 Apr), including those concerning the legal costs that will possibly be incurred by parties who have been issued Part 3 Directions under Section 17 of the proposed Act.

Speaking at a forum held at the Singapore Management University (SMU) on Wed (April 3), Mr Tong was quoted by TODAY as saying that the potential problem of individuals and entities being set back by high legal costs in the process of challenging Government Directions under the proposed Act is a legitimate one.

He suggested that “those of us in Singapore who need financial help and support for legal services, that’s already available and systems are in place to assist those people”.

Mr Tong also noted while “it is a fair question about whether or not you are well-resourced or sufficiently well-resourced to apply to court”, the Government has nonetheless decided that the courts should become “the final arbiter of truth”, as previously suggested by Home Affairs and Law Minister K Shanmugam, as the judiciary’s independence from the two arms of Singapore’s government makes it suitable to exercise “proper oversight” over a ministerial decision to issue a direction.

However, in practice, for parties that have been issued directions to seek recourse in the courts, the process will not be as easy as Mr Tong implies, and in fact a lot more tedious than he had painted the solution to be.

This potential dilemma is illustrated by the many hurdles and conditions that need to be met below, as stated on the Ministry of Law (MinLaw)’s website: 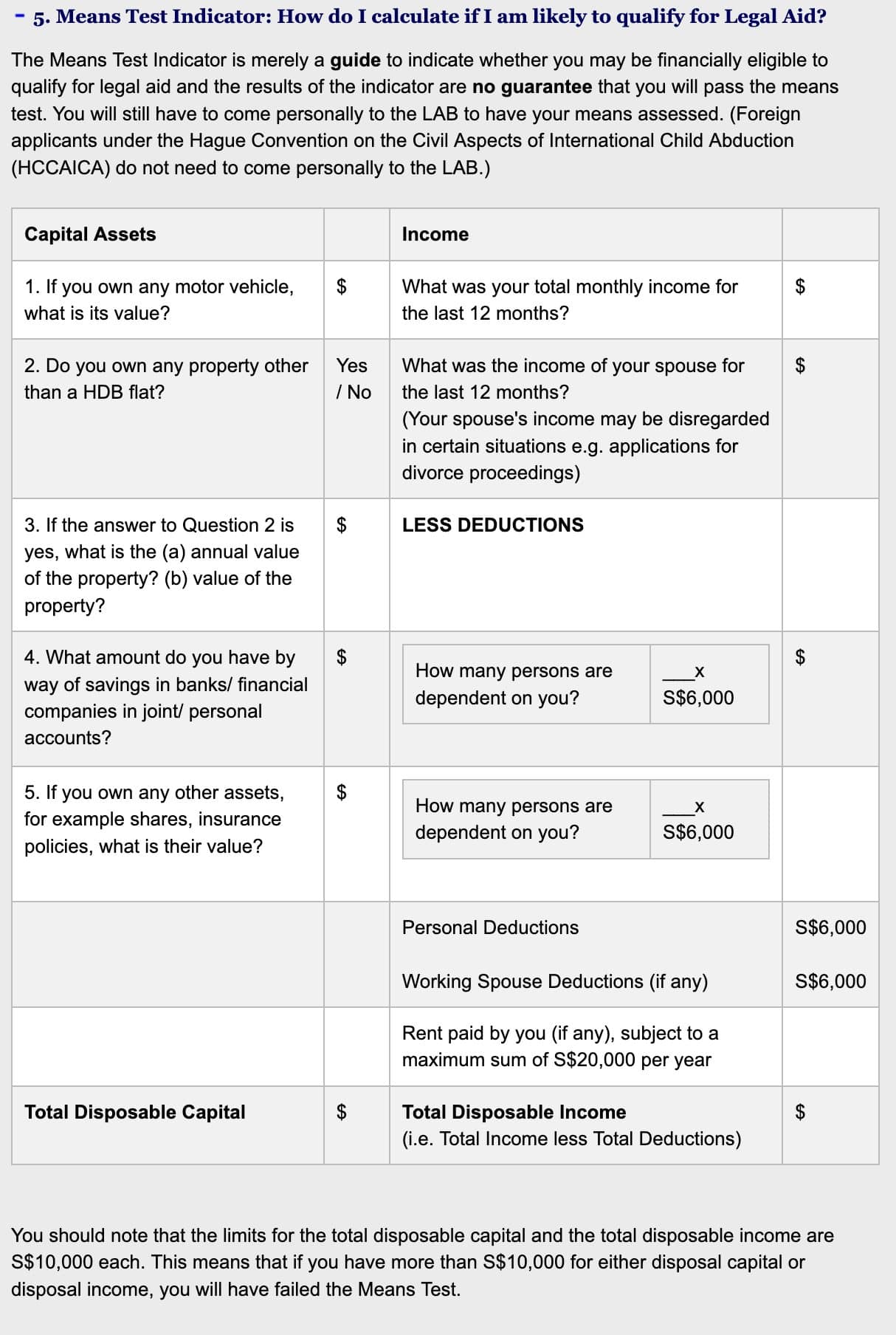 Multiple questions may arise as a result of such a situation, including how many people are able to meet those conditions, especially when it is also indicated that the above is only a guide, and thus there is no guarantee that an individual will pass the Means test.

Another question that may arise is whether it is it fair to bar financially disadvantaged parties that have supposedly been wrongly issued Part 3 Directions from the Government under the proposed Act from seeking redress via the judiciary, or even to seek redress at all through other means, simply on the grounds that they do not meet certain thresholds set by the Means test.

It could also be questioned if the multiple requirements set under the Means test, combined with the courts as the apparent sole means of seeking redress regarding the issuance of Government Directions under the proposed new legislation, is designed to dissuade people from defending themselves in the event that they have been improperly issued such Directions.

Updated to include specific Section from Bill pertaining to appeal against Part 3 Directions in the first paragraph.

For just US$7.50 a month, sign up as a subscriber on The Online Citizen Asia (and enjoy ads-free experience on our site) to support our mission to transform TOC into an alternative mainstream press.
Tags: Fake News Bill

Should we trust the govt with POFMA?