AGO report – gov’t should act with “similar vigour” against depts and stat boards: Sylvia Lim

In her affidavit to the court on Monday, the chairman of the Aljunied-Hougang-Punggol East Town Council (AHPETC), Sylvia Lim, said the town council has been singled out for “exemplary treatment” by the government.

Ms Lim was referring to how the MInistry of National Development (MND) has doggedly pursued the town council over issues of its finances, despite an extensive one-year audit by the Auditor-General’s Office in 2014.

Given that the MND is now going to the court to request it to order an external accountant to oversee disbursements of government funds to AHPETC, Ms Lim said “it would appear that AHPETC has been singled out for exemplary treatment.”

Ms Lim, who is also the chairman of the Workers’ Party (WP), then referred the court to the recent Auditor General’s Annual Report which was released on 15 July this year.

“The AGO’s Annual Report chronicles numerous lapses by government departments and statutory boards, including the People’s Association [PA] and National Parks [Nparks], which comes under the respective purviews of the Ministry of Culture, Community and Youth, and the MND itself,” Ms Lim said.

She added: “Issues cited in the AGO’s Annual Report pertaining to those two organisations include, inter alia, the failure to manage related party transactions and conflicts of interest, and the questionable waiver of tender for S$20 million worth of works.”

The AGO had issued a damning report on the PA.

It found that 40 per cent of the 115 grassroots organisations it “test-checked” had financial irregularities, including the case of the chairman of the Admiralty Citizens’ Consultative Committee (CCC) who was involved in approving awards of two contracts totalling $32,000 to a company in which he had an interest.

In addition, he was also found to have approved “his own claims amounting to $114,767.”

“As a result, there was no assurance that these transactions were conducted at arm’s length.”

All in all, the irregularities found by the AGO involving the PA amounted to more than $20 million.

On the same day the report was released, the PA said it had in fact already conducted its own investigations into the case of the Admiralty CCC chairman, Mr Tonic Oh, and that it had found “no evidence of dishonesty” on the part of the chairman.

The MND Minister, Khaw Boon Wan, said that he was “glad” too that the PA “panel investigation” had found “no evidence of dishonesty” on the part of Mr Oh. 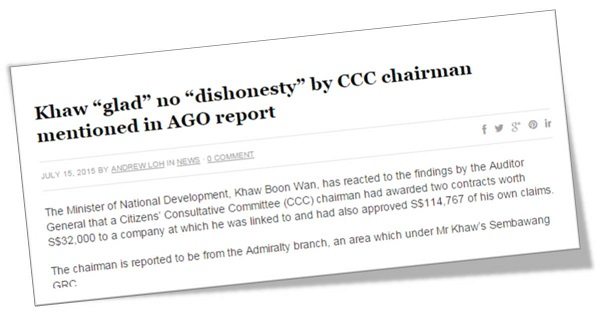 A few days later, the PA announced the formation of a three-member panel to “review” the procedures for financial transactions and rules for its members.

The panel is made up of three of its own grassroots leaders.

Despite this, calls were made for the government to withhold all grants or funds to the PA until a full audit of all its 1,800 grassroots organisations is conducted.

The Government had announced, earlier in the year, that the PA’s expenditure would be doubled this year – from S$500 million to S$1 billion.

The Government, however, has not responded to the call for it to conduct a full audit of the PA, which had never been audited by the AGO until this year.

See here: “Gov’t should freeze all funds to PA until full audit is done“.

As for Nparks, the Auditor-General found some serious irregularities with regard to its management of the Gardens by the Bay project.

Among a slew of irregularities, the AGO found that three consultancy contracts worth a total of $20.77 million were awarded via waiver of competition without compelling reasons.

According to the AGO report, Nparks “acknowledged that the reasons cited for waiver of competition were not compelling and indicated that it should have called open tenders instead.”

However, Nparks did not provide any explanation of how these contracts were awarded without tender.

See here: “Contracts worth $20.7m awarded by NParks without competition: AGO“.

When these were raised in court, the MND’s lawyer Aurill Kam, from the Attorney-General’s Chambers, objected to the affidavit being admitted into court, and said the AGO report on the public sector is “irrelevant because it does not deal with issues at AHPETC”.

Chief Justice Sundaresh Menon, however, said the AGO Report was in the public domain.

“I couldn’t see anything that I shouldn’t be seeing,” CJ Sundaresh said.

Nonetheless, these findings of the AGO, among others in its audit report, prompted Ms Lim to say that she hopes the authorities will be as enthusiastic in investigating each lapse in each of these cases, as they have in its action against AHPETC.

Ms Lim said in her affidavit:

“Given the government/MND’s zeal in taking AHPETC to task, I trust that the government and the MND will follow up, in a similar manner, with all of the various government departments and statutory boards that have been cited for lapses in the AGO’s Report; and act with similar vigour, by withholding grants and commencing legal proceedings.”