Last evening, a post by “an ordinary Singaporean” went somewhat viral with on social media, saying how two opposition parties were backstabbing each other during their walkabouts.

A Facebook account by a person named, Rommel Tan wrote that he was greeted by a group of volunteers from political party, SingFirst on Sunday, asking he and his family not to trust and vote for National Solidarity Party (NSP). He was subsequently approached by Steve Chia from NSP and said the same words to him.

Rommel went on to say how a member of parliament from the People’s Action Party (PAP) came to him to ask about his well-being and his family instead of saying stuff about the opposition parties.

Denial of allegations by Rommel Tan

However, Steve Chia, who was mentioned, wrote a post to clarify the matter. He said that he does not know who the person is and has not spoken the words that were attributed to him.

Chia goes on to say that he has respect for all opposition members as well as members from SingFirst and would not say things such as “SingFirst are useless.”

“It is my basic principle not to bad-mouth another politician or Opposition Party.” wrote Steve Chia.

He added that there does not seem to be any PAP MP or Minister walkabout yesterday morning at Tampines St 81 market area and ending his post with a hashtag, “‪#‎PAPIB‬ hard at work.” 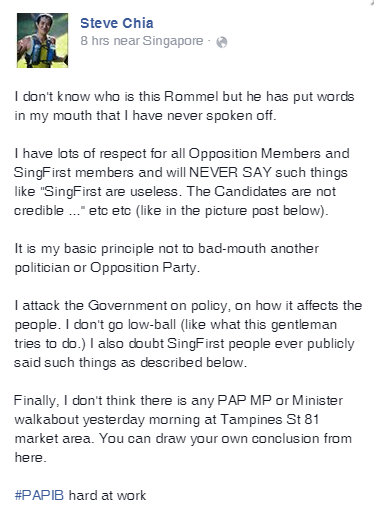 TOC contacted Tan Jee Say, Secretary General of SingFirst on the issue, and Mr Tan said that he had checked with his members and no one claims to have said the words that were attributed to them.

Glee by pro-establishment pages and individuals

Pro-establishment pages such as the Fabrications about PAP have shared the post and ridiculing the opposition parties on the matter.

Even the former nominated member of parliament, a member of the Media Literacy Council, Calvin Cheng shared the post on his account but has since taken down the post.

Who is Rommel Tan?

Rommel Tan’s account was created in 2015 and shares little info with the public. However, netizens were quick to notice that the profile picture of Rommel Tan belongs to another person by the name of Nicholas Lim.

Although Rommel Tan insist that he is the real person instead of Nicholas Lim, the company that Nicholas Lim is listed to be working with, Brown TCG has his profile listed in its website

The site states, Nicholas Lim, creative director – “A marketing guru in the global market, Nicholas’ illustrious career spans nearly two decades – from the US to Europe to Asia – across various industries from technology to consumer goods. He is a graduate of the University of Southern California with a B.S. in Business and an M.B.A. from the University of Notre Dame.”

So if Nicholas is indeed the real person featured in the photo, then who is Rommel Tan? And what is his motive behind making such an accusation against the opposition parties?

With election looming just around the corner, Singapore opposition/alternative parties would surely expect more of such comments from such “legitimate” Facebook accounts coming their way.

Update: Rommel Tan’s account has been either deleted or unpublished as of 12.05am Tuesday

Read TOC’s article, “Where have all the IBs gone?”, three part series!
Part 1: Evolution of PAP’s online counter-insurgency
Part 2: Catch them if you can
Part 3: Their cause and its effect