He was upset at seeing a mother breastfeeding her child a few seats away from him in a restaurant in Indiana, US.

So he took a photo of the mother and child and posted it on Facebook and Instagram.

Little did he know that the tables would be turned against him, as many came to the support of the mother, after she responded to him in her own Facebook post.

This was what the man posted on his Facebook page: 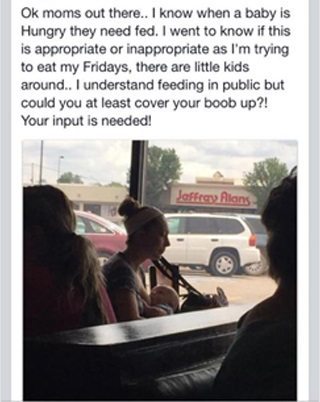 “The man who took this picture was a complete stranger to me, he was sitting 3 tables away from us with his young daughter,” Ms Conner Kendall, the mother in the photo, said.

“He snapped the photo and then put it up on social media (Facebook and Instagram), many of the comments that followed were nothing less than harassing and shameful to, not only me, but every past, present, and future nursing mother.”

And Ms Kendall was not about to let him get away with it.

“I was really very hurt by this act, because I was in no way bothering him, so what gave him the right to shame me?”

She took to her own page and wrote a long post to explain why she had to breastfeed her baby and also to scold the man.

“While I in no way, shape, or form owe you any explanation I would like to clarify a few things. I did nothing wrong, I turned away to latch my son and pulled my shirt back up when he was finished out of respect for others in the restaurant. I do not use a cover, because my son fights them, screams, and doesn’t eat at all while under them. If he had been screaming because he was hungry then I would be a bad mom for not feeding my hungry child. I did not pump before leaving home, A-because my son does not like to take a bottle and B-because it is my right to feed him any way I see fit wherever I see fit.”

“I strongly encourage you to educate yourself as well as your daughter about breastfeeding. Breasts are meant to be used to feed our young. It is society that has sexualizes them. Children do not sexualize breasts until they are taught to do so. I pray that if in the future your daughter chooses to breastfeed that she is not shamed and does not have her picture plastered all over social media.”

You can read her entire post here, where many expressed support for Ms Kendall.

This is the second time in recent weeks where complaints about women breastfeeding in public have made the spotlight.

On 28 May, another man in Queensland, Australia, complained about a woman breastfeeding her baby in another restaurant.

He approached the restaurant owners to ask that they told the woman to leave, or to cover up while she breast-fed.

But instead of doing that, Jessica-Anne Allen, who owns and runs the Cheese and Biscuit Cafe with her husband, told the customer to leave.

“We told him that we are a breastfeeding friendly cafe, that we have mothers’ groups and ladies who come and breastfeed all the time and we would never ask a mother to cover up when she is feeding her child,” she said.

“We also told him there were plenty of seats inside, away from the woman and her friends, if he wanted and he seemed fine, and as far as I was concerned that was the end of it.”

When she went out to deliver coffee to him later, she noticed that the young mother was upset – the customer apparently had said something to her.

“When I put his coffee down, he mentioned that he said something to her and that the next time I should probably ask her to cover up,” Ms Allen said.

“So I informed him I would rather ask him to leave, and I took his coffee and put it in a take away container and asked him to leave.”

The restaurant affirmed that it was pro-breastfeeding and would not stand for the disgraceful attitudes of some. Here are 17 photos which show the beauty of breastfeeding in public by Craig Carilli.