By Benedict Chong
Governments tend to believe that they have at their disposal tools and mechanisms that will help them manage income inequality. Some of these include elaborate policies and schemes for taxes and subsequently transferring these back to the needy of society.
These mechanisms are often cited by the Singapore government, the opposition and more recently, by protesters at Hong Lim Park. The protest held on 27 September, better known for its controversial march that intruded a YMCA charity event, also saw speakers bring up some of these policies and schemes, in the quest of improving them.
This article will examine some of the solutions the speakers claim will solve inequality, vis-à-vis some of the current schemes that the State has employed for that same purpose. (Video recordings of the points made by the protesters are also available online.)  But do such measures really work?
Minimum wage 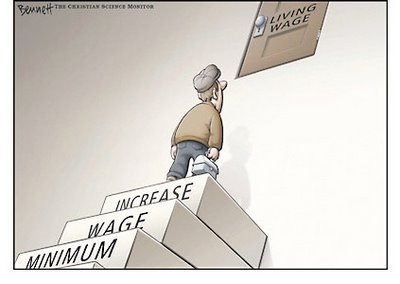 One of the most important and prevalent proposals to bridge the income gap is to implement a minimum wage. In Singapore, a minimum wage is one of the cornerstone policies of the Worker’s Party and apparently the Hong Lim Park speakers as well.
While most economists believe that higher prices decrease consumption, they also conveniently ignore the fact that labour markets work the same way as the goods and services market.
Legislated increases in wages above productivity levels would ultimately result in either unemployment or higher costs which will be passed on to the consumer in the form of higher prices. With inflation rising, pressure to increase the minimum wage also increases, starting a vicious cycle of continuously increasing prices and legislated wages which do nothing except harm economic competitiveness.
An ‘open door’ immigration policy instituted by the State should theoretically have led to lower prices to accompany lower wage rates in Singapore. Unfortunately, this is not the case with skyrocketing property prices, escalating food costs and increasing public transportation fees.  And this can only be due to government intervention. For example, worker levies increase the real cost of supposedly cheaper labour, with the difference going into State coffers instead of benefitting the consumer in the form of lower prices.
A minimum wage is thus not an answer to income inequality. Its implementation will only worsen inequality as unemployment soars in response to higher labour costs. While enforcing a floor on labour costs may be a populist stand by blogger Roy Ngerng and the Worker’s Party, it will eventually be self-defeating and counterproductive.
Transfer payments and welfare spending

In another segment of his speech, Ngerng reasoned that the government should take care of its citizens because we pay taxes. He listed examples which included GST, currently at 7%.
But the premise here is that government is expected to levy taxes on the population. And that is just quite simply erroneous. Governments always give populist reasons for unpopular policies and prior to implementing GST, the State declared that the extra revenue was for social spending.
However, GST is a regressive tax which harms the poor. The official standpoint is that the rich tend to pay more in GST because they purchase big ticketed items such as yachts, Swiss made watches, and other luxury items. But how many of these luxury items can the wealthy purchase? On the other hand, the poor have to spend on food, water, clothing and other basic necessities every day, raising an already high cost of living.
Of course, the government will point out how GST rebates are being distributed as a form of transfer payments. Yet, if these rebates are going to the poor and middle class, what is the rationale for GST, especially with all its inflationary pressures? After all, the middle class usually contribute the majority of such taxes.
Another policy practiced by Singapore is a progressive or graduated tax system. This system aims to increase the tax burden on the wealthy given that people in lower income brackets pay lower or no taxes. But there are several problems with this system. Because this policy taxes nominal and not real income, a rise in income levels lower than that of inflation may result in the arbitrary individual paying more taxes and causing a decrease in his disposable income.
This is especially true in a country as susceptible to inflation as Singapore. In addition, a study in US has shown that this ‘redistribution’ process only distributes 30 cents of every dollar appropriated to the intended recipients. Contrast this statistic to private charities where 70% of all donations tend to go directly into programs championed by the organisation and the argument for State welfare programs becomes a nonstarter.
Milton Friedman once said that “any reason to reduce taxes is a good reason”. Unfortunately, we seldom see tax decreases with talk of a possible third increase in GST rates even being considered. The State is inherently inefficient due to its bureaucratic nature and paying even more taxes will only serve to subsidise ever more wastage.
Simplifying tax, reducing bureaucracy
The solution here would be to implement a flat tax rate and eliminate GST altogether. The implementation of a flat tax would ensure that everyone pays the same tax rate while avoiding the pitfalls of climbing up tax brackets. It will ensure a fair and equitable system for everyone as recited in the Singapore pledge without unfair treatment of the more productive. Eliminating GST as a regressive tax will reduce the tax burden borne by the poor and middle class.
The registrar of charities should also be closed with the humanitarian sector in Singapore liberalised, reducing the red tape preventing such organisations from doing what they do best – helping those in need. The competition for donor dollars would encourage more transparency and accountability. This will largely avert the possibility of the financial irregularities that plagued NKF and RenCi in recent years.
Other than the provision of the most basic of infrastructure such as the rule of law and incorruptibility of leaders holding political office, all the State has to do is stay out of market functions and let the economy run its course. Unfortunately, that is becoming an increasingly difficult task with needless rules and regulations being introduced to reign in apparent economic ‘excesses’.
Very often, all that is necessary to lift the general welfare of the people is to eliminate all regulatory barriers to entry into the economy. Governments have never created prosperity through the use of active legislation. Singapore achieved first world status because the State mostly stayed out of the way while foreign MNCs operated or invested in the country. Starting from a low base, it is only expected that Singapore would achieve high economic growth, with or without the PAP, in the presence of the rule of law.