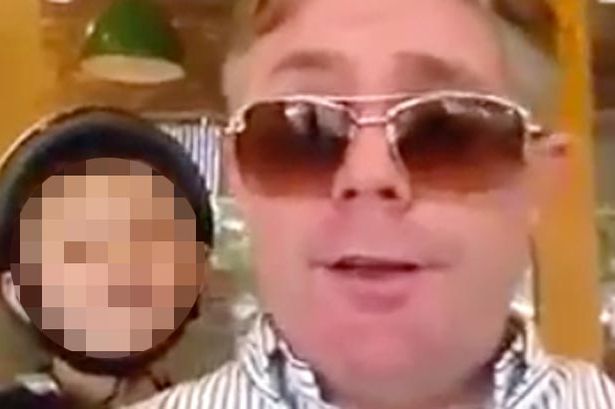 The employer of Mr Anton Casey, whose Facebook postings have caused outrage among Singaporeans (and others), has said that Casey’s comments “were made in poor taste.”
Mr Casey’s firm Crossinvest Asia is investigating his comments and is set to take “appropriate action” once the review is completed, British newspaper, The Independent reported.
In a statement, Managing director Christophe Audergon said: “Crossinvest does not condone the comments. We believe they were made in poor taste.”
Casey’s comments mocked “poor people” who took the train, ridiculed S’pore’s public transport system, and called a taxi driver a “retard”, in a series of abusive remarks online.
Casey had posted, on his Facebook page, a picture of his son sitting on a train with the caption: “Daddy, where is your car and who are all these poor people?”
Another photo shows his son in Casey’s Porsche, with an equally offensive caption: “Ahhhh reunited with my baby. Normal service can resume, once I have washed the stench of public transport off me.”
Facing the backlash from his insults, Casey tendered an apology.
“I deeply regret having offended and disrespected the people of Singapore,” he said. “I have the highest respect and regard for Singapore and the good people of Singapore; this is my home.”
Casey, who is married to a former Miss Singapore, claimed that there was a “security breach” of his Facebook page and that an old video of his which had surfaced was “misused”.
“I don’t mean to offend anyone,” he said in that video. “Don’t be angry at me. Be angry with your mum and dad for raising you a wuss.”
However, Casey said that the video was made earlier and was not a response to the public backlash. He said: “It must be made extremely clear that a YouTube video of me, with my son in the background, was not posted in response to any recent events. This video was made weeks prior and has been misused to portray me as unrepentant.”
He said that his family, especially his son, “suffered extreme emotional and verbal abuse online”.
Casey, who is believed to live in Singapore’s posh Sentosa Cove on Sentosa island, also said that he has received death threats following the posting.
Nonetheless, he said:

“I wish for nothing more than to be forgiven for my poor judgement and given a second chance to rebuild the trust people have had in me as a resident of this wonderful country.”
However, the outrage has not abated, and reaction from the public online continues to criticise his behaviour.
A police report by a member of the public is believed to have been lodged against Casey for his posting.
In his statement, Auderon also said, “Crossinvest has clear policies regarding the codes of conduct expected of its employees. That code of conduct extends to social media. We are currently investigating the comments made by our employee and will take appropriate action once we are in possession of all the facts.”
Singapore’s Law Minister, K Shanmugam, has given his views on the matter. Posting on his Facebook page, Shanmugam said:

“I have been asked what I thought of Mr Anton Casey and his statements. Like many Singaporeans, I am terribly upset and offended by what he has posted. Deeply offensive, wrong, and unacceptable.
“Those who have done well in life should always be looking out for others – especially the less well-off or needy. It is basic human decency. Instead Mr Casey showed contempt. Having money and a Porsche, does not automatically mean that one is superior. Character is important.
“I am glad the community has come together to condemn what he has said.
“He has attempted to apologise to Singaporeans. But some feel that the manner of his apology showed a lack of sincerity. And I think there is some basis for thinking that.
“At the same time, I hope that Singaporeans will not attack or flame his family because of his actions. We, Singaporeans, can be bigger than that.”

The British press has picked up on the story. You can read them here:
The Independent: Singapore after mocking “poor people” calling a taxi driver a “retard”
The Telegraph: British businessman receives death threats in Singapore over Facebook comments
The Guardian: British banker receives death threats for anti-Singapore diatribe
Daily Mail: British banker: I need to wash off the stench of public transport used by the poor