Costs over due process?

The deportation of 53 foreign workers who were allegedly involved in the Little India riot on 8 December is the latest example of seemingly arbitrary enforcement actions taken by the Government.

The repatriation of the 53 workers has drawn criticisms from various quarters, including Human Rights Watch and Workfair Singapore, along with members of the public online.

The charges against the 53, according to a police statement on 17 December:

“Group Two consists of 53 persons whom Police has identified to have participated in the riot and who failed to disperse despite Police’s orders to do so. They had knowingly joined or continued to participate in the riot, after being ordered to disperse, impeding the riot control and emergency rescue operations. Their actions and conduct had threatened public order, thus making their continued presence in Singapore undesirable. They were all rounded up in a Police operation in the early hours of this morning. They will be repatriated after being issued a stern warning. They will be prohibited from returning to Singapore.”

What is perhaps most shocking about the matter is the Law Minister’s explanation, as reported here.

Mr K Shanmugam, the minister in question, reportedly said that “repatriation happens on a regular basis.”

Mr Shanmugam’s remarks are shocking for several reasons, the most important of which is how cost-savings is apparently – and disconcertingly – cited as a reason to repatriate the workers..

Does this mean that if or whenever there is an incident which involves a large number of accused, the government will prefer a quick administrative resolution over a judicial one?

What then does this mean for the rule of law, and one’s right to legal recourse?

While the law may allow the government to deal with such cases through administrative decree, it should nonetheless be the last option which the government should resort to.

If we are more interested in saving costs than to make sure justice is done, and seen to be done, then we are all the poorer for it. Justice then would seem to be an opaque, arbitrary thing, administered through unilateral decision-making by the authorities.

Deputy Prime Minister Teo Chee Hean had said, on 17 December, that those arrested would be dealt with “strictly, firmly, and fairly.”

How is deporting the 53 workers without granting them recourse to appeal the government decision fair?

This is the same way the government dealt with 29 mainland Chinese SMRT drivers last year. They too were repatriated without being given an opportunity to present their cases, or to defend themselves from the accusations. 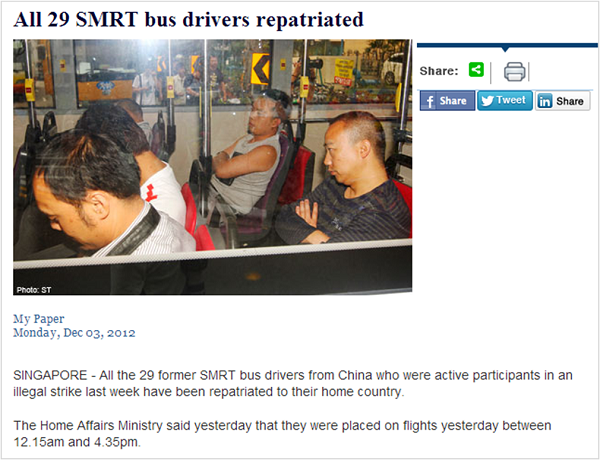 In 2003, during Vignes Mourthi’s appeal in the courts, his lawyer M Ravi argued that evidence against Vignes was questionable. According to a news report:

“When Mr Ravi asked the Chief Justice [Yong Pung How] if the public prosecutor was ‘still maintaining that an innocent man be hanged because of procedure’, the CJ answered: ‘Yes, the answer is yes.’”

Are we so insistent on administrative efficiency that we would follow it even as potential injustice stares us in the face?

Who reviews the police’s decisions? Or have power over it? Who shall an accused turn to if not the courts? Yet, what shall one do if that avenue is denied to one?

“It’s an issue of due process,” Mr Robertson, Human Rights Watch’s Asia deputy director, told the BBC. “Singapore does have a policy of deport first and ask questions later.”

“No one is excusing the people who used violence on that day… but in the case of the deportations it’s not clear how the decision was taken, what evidence was brought against these people, or whether they had the opportunity to present their version of the story.”

What then does the DPM mean when he promised that these workers would be dealt with “fairly”?

How is deporting them without granting them avenues of appeal or defence a fair action?