Question is, will Chan be appointed as Finance Minister in the next cabinet reshuffle?

Last Thursday, The Straits Times ran a piece, “Who will be Singapore’s next PM with Heng Swee Keat stepping aside?” following the groundbreaking announcement that Deputy Prime Minster Heng Swee Keat would be stepping down as the leader of the 4G ministers and from his position as Finance Minister.

In the write up, ST points to the top candidates who would possibly take over Heng’s role as designated PM successor. The four named are Chan Chun Sing (51), Ong Ye Kung (51), Lawrence Wong (48) and Desmond Lee (44).

Other than listing their portfolios, nothing else is said about why they are touted as the top candidates.

The ST article itself—despite its title—seems to show how the other possible candidates pale in comparison to Chan’s portfolio rather than providing an analytical breakdown as to the chances each candidate hold.

Now, this post is not to criticise the ST article but to say that it should be clear to the general public by now that Chan has been the choice of PAP’s top leadership to succeed from PM Lee Hsien Loong, and they have been grooming him to do just that since he was elected as a member of Parliament in Tanjong Pagar GRC then-helmed by the late Lee Kuan Yew.

Using Heng and PM Lee as a reference, the new successor would have to assume the now-vacant position of Finance Minister so as to have the qualification to do so.

Will someone be appointed into the role of Finance Minister after taking over their current position barely a year ago? That is one thing we should consider.

Even if we were to put aside the position of Finance Minister, as the ST article rightfully pointed out, Chan had been appointed the portfolio of the Ministry of Trade and Industry, Ministry of Defence, Ministry of Community Development and Sports, Ministry of Social and Family Development, Ministry of Information, Communications in his political career so far.

Outside of Parliament, he has also been appointed as deputy secretary-general of the National Trades Union Congress (NTUC), and he still holds the post of Deputy Chairman of the People’s Association.

Now, while it is true that Chan does seem to be the highest qualified minister out of the many candidates in the PAP leadership to take over the premiership, Chan remains an unlikeable PM candidate for Singapore voters, for reasons which the party cannot fathom.

In the latest Yahoo! poll asking for readers to vote for the possible next leader of the 4G ministers, Chan only scored 10 per cent of of 22,374 votes. A petition has also been created to call out against his possible appointment as designated PM successor, and although there has been another counter-petition created, it pales in comparison with the former in terms of support. The counter-petition has just over 800 signatures compared to over 5,000 in the first petition.

Additional, with its party machinery and resources, the PAP is aware that if Chan had been explicitly named as its designated PM successor to Lee Hsien Loong, it would have suffered heavily in the polls.

So after a long wait for PM Lee’s succession plan, Heng was appointed as the successor. Any doubt was dismissed when he was named sole Deputy Prime Minister in the cabinet reshuffle of 2019.

Heng’s performance in Parliament during his “sparring sessions” with the Workers’ Party and during the GE2020 campaigning, would likely have not convinced the party and the voters of his ability to succeed PM Lee. If he had been able to win the crowd over, the party would have begged him to stay on as the publicly-anointed successor, even if he had his difficulties.

But even if Heng was popular, that doesn’t mean he would eventually be the next PM. Case in point, Minister Tharman Shanmugaratnam.

Tharman, who had also been the Finance Minister and Deputy Prime Minister, was named the clear favourite of Singaporeans to succeed PM Lee as Singapore’s next Prime Minister in a survey conducted by market research consultancy Blackbox back in 2016. According to the poll commissioned by Yahoo! Singapore, 69 per cent of all 897 respondents said they would support Tharman as a candidate to be prime minister.

In that poll, Heng got 25 per cent while Chan Chun Sing got 24 per cent. Wong and Ong both got less than 10 per cent while Desmond Lee wasn’t even mentioned. Despite having overwhelming support from the public and the ability to take up the role immediately without a long runway, Tharman has never been considered as a possible successor.

My close friends would know that I have always said that Heng is the candidate that PAP would prefer as he was relatively well-respected and liked then, furthermore he could give the most appropriate reason to step aside as a successor and make way for Chan when the time comes for Chan to take up the mantle of PM—due to his medical history of recovering from a stroke.

This is why, in my opinion, even when Heng was appointed as PAP’s assistant-general in 2019, Chan was appointed as the second secretary-general alongside Heng at the party convention prior to GE2020 to pave the way for such an eventuality.

For those who do not believe that Chan was preferred over Heng, just look up who had been tasked to be the Chinese narrator for the National Day speeches in 2016, 2017 and 2018 prior to Heng’s delivery in 2019 after he was appointed PM successor.

If Ong Ye Kung, who was elected into Parliament in 2015, had been one of the top choice for PAP, he ought to have been the preferred choice for that role due to his superior command of the language compared to the rest of the cabinet. But he wasn’t. Instead, it was Chan.

Chan has also been pushed to the front when it comes to Singapore-China relations since the early days of his political career. 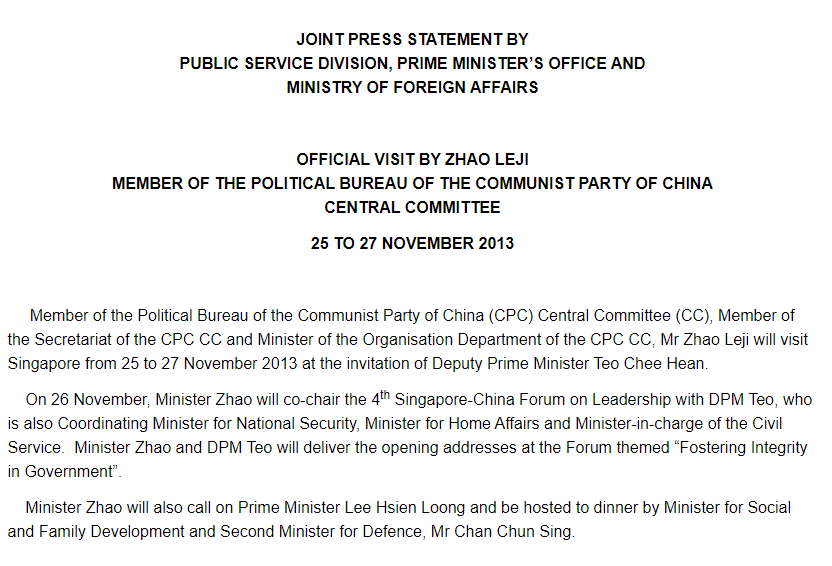 Heng, too, headed Singapore’s delegation to China but that was largely after he was appointed as DPM in 2019.

I don’t think there will be an announcement on Heng’s replacement as the successor to PM Lee since the Prime Minister’s statement on 8 April merely stated that there will be a cabinet reshuffle.

Now, the question here is whether the PAP will appoint Chan as the Finance Minister to replace Heng, which would be an indirect sign that he is poised to take up the role as designated PM successor even if he is not appointed as DPM.

A benefit that PAP might see in such a move—if PAP really intends to appoint Chan as PM eventually—is that he will have the opportunity of winning over his detractors. The party can facilitate this by giving him credit for improving the economy post-COVID-19.

And if he really is appointed, it would explain the timing of Heng’s announcement as it would have been hard for Chan to deliver the Budget 2021 in the capacity of Finance Minister, and that the decision for Heng to step down was already made way before the announcement.

But all this will remain as speculation and hypotheses till the end of time, as we will not get access to official documents which could shed light on what transpired behind closed doors without the presence of a freedom of information act.

So why Chan despite his unpopularity?

For one, Chan as the former Chief of Army, still commands respect from his military comrades who are currently in the force. For any authoritarian regime, support from the military is an utmost priority.

Secondly, although scorned by the public, Chan enjoys much support from the grassroot leaders due to his approachability as a leader and his willingness to adopt solutions proposed from the ground.

Will PAP change its mind about Chan if they really intend for him to take over as PM Lee’s successor? The answer to that is to ask, has the party ever changed their mind about their unpopular decisions made under PM Lee’s leadership?