Amidst the controversy surrounding the ongoing trial of three Workers’ Party (WP) Members of Parliament (MPs), a pro-People’s Action Party (PAP) Facebook page has been posting potentially inflammatory commentary regarding the WP MPs’ dispute with the Aljunied-Hougang Town Council (AHTC) and the Pasir Ris-Punggol Town Council (PRPTC), passing off its opinions as undisputed facts. The page, named “Fabrications About The PAP,” has accused the three WP MPs — former secretary-general Low Thia Khiang, current secretary-general Pritam Singh, and chairperson Sylvia Lim — of “misleading the public and the other town councillors into giving FMSS contracts at 36.7% higher cost without tender.”

Citing a report by the Auditor-General’s Office (AGO), the page also argued that “AGO’s checks revealed that the combined fees of the incumbent contractors […] was 30.1% lower than what the Committee had informed the other Town Councillors.” The accusations made by the Facebook page have also reached the extent of drawing parallels between the WP MPs’ defence and that of former Malaysian Prime Minister Najib Razak and his then-Deputy Ahmad Zahid Hamidi regarding the mishandling of state-funded body 1Malaysia Development Berhad (1MDB) during their tenure in the previous Barisan Nasional administration, insinuating that “acting in good faith” is mere lip service and a flimsy justification of the alleged misappropriation of public funds on the WP MPs’ part. The Facebook page also made the allegation that the lawsuits were a ploy to conceal the WP MPs’ purported “incompetence” and a means of playing “years of hide and seek with their own auditors” and the Government, as well as exploiting the town councils to further benefit from public monies should they end up winning the lawsuit. 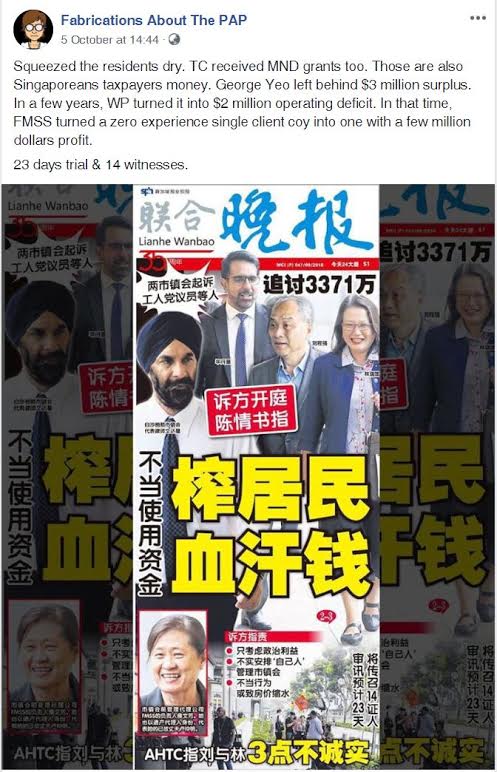 Ms Lim was also specifically singled out by the Facebook page on one occasion, branding her the “mother of all misleading statement[s]” who had orchestrated the lawsuits “to recover S$30mil of ownself overpayment to ownself.” The question that arose from the postings made by “Fabrications About The PAP” was whether or not such postings fall under the category of sub judice contempt. Sub judice refers to the prohibition of making public commentaries on or publicly discussing cases that are still undergoing judicial consideration.

Legal associate at Harry Elias Partnership LLP Mr Sui Yi Siong argued that such commentaries, which include publications and media reports, fall under sub judice contempt, as they pose a “real risk of prejudice” to the proceedings.

Laws governing sub judice contempt, he explained, “ensure that accused persons are only tried on the basis of evidence before the Court.”

Noting that laws dealing sub judice contempt originated during the period in which Singapore still conducted trials by jury, as it was perceived that members of the jury were more susceptible to “pre-judge the accused even before the proceedings start” and having their verdicts influenced by “unfavourable” media publicity which might or might not be false, Mr Sui questioned if sub judice laws such as contempt of court are still relevant in Singapore’s current bench trial system, or more commonly known as trial by judge.

Arguably, social media posts such as the ones made by “Fabrications About The PAP,” given its outreach potential and the capacity to influence the ongoing proceedings, could reasonably fall under sub judice contempt.

In his commentary, Mr Sui suggested that “Singapore case law is also quite clear that that what is traditionally thought to be “prejudicial evidence” will not influence the mind of a professional Judge,” and that “even if a popular tabloid publishes the history of an accused’s past convictions, it would be exceedingly hard to argue that a pending trial might be influenced in any way.”

He added that such public commentaries will not pose a “real risk of prejudice” to judges in Singapore courts, as they “are required to evaluate facts and arguments objectively.”

TOC has reached out to the Attorney-General’s Chambers (AGC) on Sunday, to confirm its stance on the issue, given that “Fabrications About The PAP” has made public, uncontested allegations regarding the WP MPs and the ongoing trial as a whole such as:

However, TOC has yet to receive any response from the AGC regarding the matter.

This raises the question as to what the Singapore courts and the Parliament truly consider to fall under the scope of sub judice contempt, seeing that the AGC was given leave to begin legal proceedings against Li Shengwu over his private Facebook post, of which a screenshot was disseminated without his consent and knowledge, despite Facebook being a public domain as a whole.

In Mr Li’s case, AGC had issued a media statement to all publications in Singapore a day after a media query was made to them on Sunday to inform the public that they were looking into the case.

Given the nature and context under which Mr Li — who was ordered to “purge the contempt” from his post and was even ordered to remove the post — had written and published his post, the categorisation of sub judice contempt by AGC and the courts appeared to be inaccurate and perhaps even inappropriate in his case, in contrast to the public allegations made by “Fabrications About The PAP” in the present case.