The SIngaporeans First Party (SingFirst) has confirmed that it will not be contesting the Ang Mo Kio GRC in the upcoming elections.

In a statement on Monday, the party said, “To avoid a 3-corner fight, SingFirst will hereby withdraw its interest to contest AMK GRC and focus its resources on Tanjong Pagar and Jurong GRCs.” 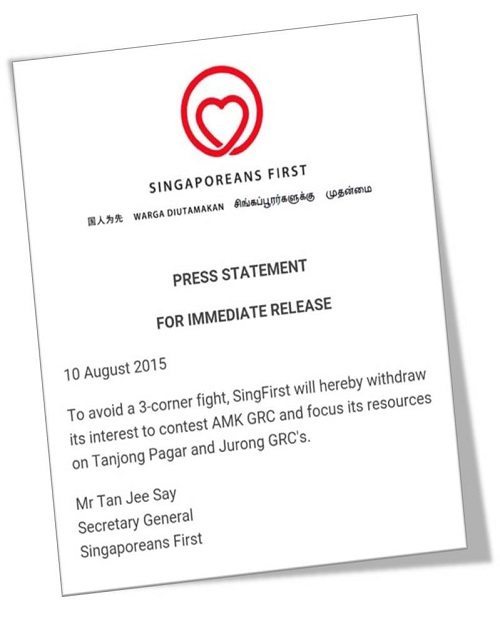 The statement was signed by its secretary general, Tan Jee Say.

The Reform Party (RP), which had contested the Ang Mo Kio GRC in the last elections, were visibly upset when SingFirst expressed interests in the constituency at the all-party meeting of opposition parties last week.

Also on Monday, the National Solidarity Party (NSP) announced that it is pulling out of the contests in Macpherson SMC and Marine Parade GRC, leaving the two constituencies to the Workers’ Party to have a straight fight with the People’s Action Party (PAP).

The WP chairman, Sylvia Lim, thanked the NSP for its withdrawal and said that the WP will now focus on the 10 constituencies it will be contesting in the elections.

The only potential three-cornered remains in Potong Pasir SMC, where lawyer Tan Lam Siong has said he will be contesting as an independent candidate against the Singapore People’s Party’s Lina Chiam and the incumbent PAP MP, Sitoh Yihpin.

Everywhere else will be straight fight between the opposition and the ruling party.