There are “more than 100,000” Bangladeshi male adults workers in Singapore, and that more than nine in ten of them are fed unhygienic food, a National University of Singapore research centre study has found.

The survey by the Center For Culture-Centered Approach To Research And Evaluation (CARE), in partnership with non-governmental organisation Healthserve, was conducted over a two year period, from 2012 to 2014, with some 500 workers, including 65 in-depth one-on-one interviews.

The results of the study showed: 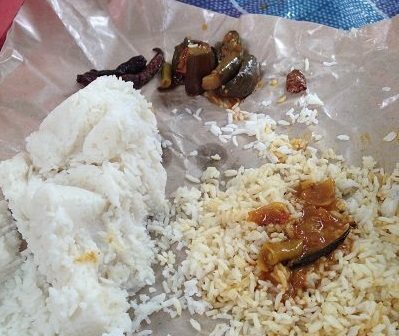 The workers also described the food they are given as “foul smelling”, “rock-solid”, “feel like eating tyre”, and that at times the vegetables were “rotten” and insects such as cockroaches were found in them.

The stale food has also contributed to the weak health conditions of some of the workers, who have to pay about $100 or more a month for the catered food.

The study found that 86.2 per cent had fallen ill after eating catered food, and common illnesses included vomiting.

“We feel weak at our workplaces; have no energy due to the food we eat,” Bangladeshi worker Massood said. “But we have no choice.”

His compatriots feel the same, as quoted in the CARE report:

Rahim: “Gastric attack is common, we have sleeping and food problem here and those cause several types of physical problems. We would not feel weak if food and sleep were okay.”

Jamil: “We are eating fish stored in refrigerator that we do not even realise what we are eating, is it fish or grass? They are simply tasteless. We eat so that we live.”

Liyon: “The food we are provided with by catering – like bread in the morning is so tough that it is not possible to eat them. It feels like eating tyre.”

Badal: “Another problem of catering is that when food is supplied the breakfast and the lunch are usually given together at the same time in packets…its cooked at around 12 in the night and we eat the lunch around 12 p.m. in the afternoon after 12 hours it is already stale.”

The CARE report is part of the center’s White Paper series and its preliminary findings were reported in March by the TODAY newspaper.

“Breakfasts and lunches are delivered to workers’ dormitories as early as 6am. By lunch time, the food smells rancid,” Mr Manishankar Prasad, a researcher with CARE, told the newspaper then.

TODAY also conducted its own interviews with foreign workers and found that the workers’ packed meals do not come with time stamps, a requirement under National Environment Agency (NEA) rules.

The agency recommends that “cooked food kept under temperatures of between 5 and 60 degrees Celsius be consumed within four hours of preparation,” TODAY said.

Construction supervisor Zakir Hossain Khokan told TODAY: “If you come by construction sites or shipyards early in the morning, you will see how packs of food are left along the roadside. By the time workers have their meals, often the plastic bags would have been broken (by cockroaches or rats). The food is so smelly it has obviously gone bad.”

The poor treatment of foreign workers has been a perennial concern raised  by migrant workers’ groups and activists.

“Essentially, what this discussion about meals reveals is how little infrastructure provision there is for the large numbers of migrant workers in our midst, how little thought has been given to these issues,” said Alex Au, executive director of NGO TWC2.

In 2013, Singapore was the second highest receiving country for Bangladeshi workers – with an unprecedented 60,000 workers making the trip to work in Singapore that year.

TWC2 estimates that there are a total of 130,000 such workers from Bangladesh in Singapore currently.

CARE recommends in its study that infrastructure for cooking and refrigerating food at dormitories that house workers be provided to the workers.

Mr Sromik Monir told the TODAY newspaper that he has to wait in line for as long as 1.5 hours to use the cooking equipment.

“Sometimes we finish work at 9pm. We won’t sleep enough if we cook,” he said.

Another suggestion by CARE is for greater provisions for employing companies to directly interface with catering companies in providing food to workers, to cut out the dependence on middle-men in order to save time in delivering the food to the workers.

At a news conference on Thursday to present its findings, the director of CARE, Professor Mohan J Dutta, said that workers spend an average of S$120 to S$130 of their monthly pay on food, with a quarter of this going to middlemen.

This leaves caterers scrimping on the quality of the ingredients they use to prepare the meals.

Prof Dutta suggested that employers work directly with caterers instead.

“That’s so that the food is directly catered to a worksite. That could prevent the gap between the cooking and the delivery. Employers will have more ability to control the quality because they’ll be negotiating with the vendor,” Prof Dutta said.

CARE also called for better monitoring and enforcement of food safety standards, and greater monitoring of licenses given to food caterers.

On a brighter note, there is no “widespread abuse of foreign workers in Singapore”, according to remarks by former Minister for Manpower, Tan Chuan-jin.

“Foreign workers here are, by and large, treated well by their employers,” the Straits Times reported him as having said in January 2014, following the riots in Little India.

“The problems and complaints by foreign workers make up a very small fraction of the 700,000 work permit holders here,” said Mr Tan, who is now the Minister for the Social and Family Development ministry.

Enterprise SG sees opportunities for SG firms to invest in India, thanks to CECA