By Tiffany Gwee
According to Expatistan’s Cost of Living Index, Singapore is once again ranked one of the top 10 most expensive cities to live in in the world (7th position) behind cities like London (ranked 1st) and New York City (ranked 5th). 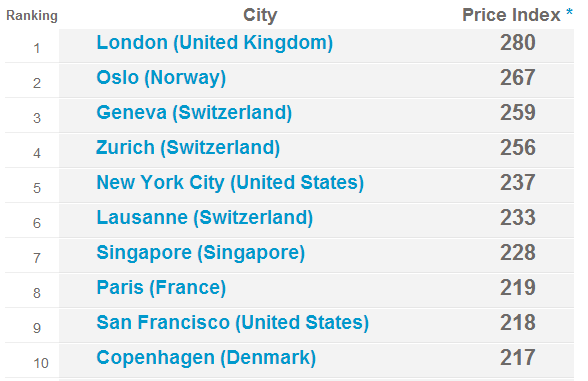 The rankings are calculated based on the cost of housing, clothes, transportation, medicine and food that people consume on a regular basis. For instance, in terms of food, there are comparisons made across usual groceries like a litre of whole fat milk or even a combo meal in a fast food restaurant.
With Singapore attaining the 7th position in the rankings, it can be said that the cost of living is many times that of other countries that are ranked lower. For example, in the case of average utility bills paid in a house of 2 people per month, the Taiwanese pay less than half (S$72) of what a Singaporean duo (S$189) would pay for the utilities.
With the rising cost of living, many will struggle to cope with this increase. This is especially true in the lower and middle-income earners in Singapore. As evident from the Central Provision Fund (CPF) Board 2011 report (refer to annex J), almost a quarter of Singaporeans earn less than $1500 a month and this will prove to be an issue regarding the affordability of items in the future. Even today, apart from cleaners earning an average of less than a $1000 a month, many individuals are currently not able to cope well with the rising costs apparent in Singapore.
Minimum Wage
It is interesting to note that amongst the top 10 most expensive cities in the world, 5 out of 7 of the countries that the cities are situated in all operate on a minimum wage system. San Francisco (ranked 9th) has the highest minimum wage of S$12.65 per hour, followed by New York (ranked 5th) with a minimum wage of S$9 per hour. Even Switzerland, the only country that does not have an official minimum wage other than Singapore, is slowly gearing towards operating based on a minimum wage system – with the Swiss residents being able to vote on whether they want to have this system or not.
The use of minimum wages in these countries are perhaps linked to the coping of higher costs of living in these cities. While Singapore does not adopt a minimum wage system, there has been much effort put into the new proposed basic pay for cleaners to be $1000, with cleaning companies and the Government raising their pay by over 20%. However, other than the cleaners, there are other professions that seem to fall under the $1000 mark.
Only time will determine the effectiveness of this new plan put in place to help the cleaners cope with the high costs but this important first step will determine many other potential wage policies that might be implemented in the future.
[spacer style=”1″ icon=”none”] Terry – An interesting note, the same report by the CPF board in 2012 has the annex J omitted.