“Every citizen is a reporter” 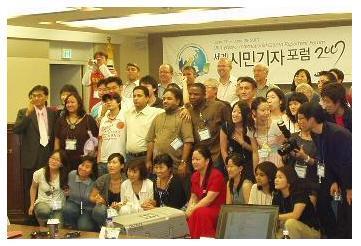 This is an extract from the blog, DailyKos.

Meet some of the citizen reporters of OhmyNews, a South Korean venture that in 2000 became the first online newspaper in the world to accept, edit, and publish articles from its readers.

It was established by Oh Yeon Ho, who has earned his credibility in the student pro-democracy movement of the 1980s, including having served a prison term for his activities.

OhmyNews was instrumental in bringing down the previous South Korean president in 2002, and the election of current President Roh Moo Hyun. Not only did OhmyNews garner the first media interview from new President Roh, but the president himself addressed the opening of the conference:

“The media has to change if our society is to advance. The most powerful force that raises the standards of the media is no other than the participation of alert citizens.

The standards of the media and quality of its products can improve when more citizens participate in the production and distribution stages and use their responsible criticism to act as a check against the possibility of the media morphing into a political power.

Moreover, solidarity between the media organizations that are actively participated in by citizens will greatly contribute to advancing democracy globally.”