Yesterday (1 March), the National Parks Board’s Animal and Veterinary Service (AVS) announced in a press release a revision in the size for domestic dogs that is allowed to stay with their owners in Housing and Development Board (HDB) flats under Project Adore.

Project Adore is an annual programme that involves the rehoming of local mixed breed dogs, which initially began in 2012. The National Parks AVS has been working on the expansion of this programme with HDB for the last two years.

The new regulation under the project makes an allowance for a 10 per cent increase in height limit for local mixed-breed dogs from 50cm to 55cm, while the weight limit rule which was previously set at 15kg will be discarded.

Senior Parliamentary Secretary for Home Affairs and National Development Ms Sun Xueling explained in the press release, “Our Animal Welfare Group (AWG) partners ensured that stringent adoption conditions are met. Residents have thus far been receptive to the presence of these rehomed dogs in their neighbourhoods”.

An AVS representative working on the project has assured that dogs being rehomed under Project ADORE would be assessed for its suitability through AVS’ partners.

This includes measures where the potential adopters are screened, and the dogs’ temperaments assessed to determine its suitability to be rehomed. At the same time, the adopters would also have to undergo and complete a mandatory obedience training programme with their dogs.

The AVS representative also added, “With these new criteria, AVS will continue to monitor the programme closely to ensure that there are no disamenities to the community.”

Netizens dissatisfied with the new regulations

Netizens flocked to the Facebook pages of CNA, Today and Mothership to express their dissatisfaction to the new HDB regulations. Some online users expressed concern that the new regulation would contribute to the noise pollution with continuous barking. On the other hand, others feared that allowing bigger-sized dogs into neighbourhood homes would put their safety in jeopardy.

Facebook user Edward Lee highlights that the new regulation does not elaborate on the number of dogs that are allowed to be owned in each household.

Meanwhile, other Facebook users opined that the issue of the new regulation is not dogs, but the issue of responsibility of the caretakers. Online users explain that the potential caretakers should maintain the cleanliness of their HDB flats when taking these animals as pets. This includes clearing after the dogs in public places.

Jyojye Kok writes, “Hope the dog owners signed a compulsory declaration with all the fines of being a dog owner (eg not picking the poo, etc) as well as an agreement to send that dog for training or show the dog has been trained for HDB living, as well as a fine for abandoning their pets if they change their minds.

In line with the new regulation, online users have also requested HDB to extend its regulation to include felines.

Facebook user Fadly Azad writes, “And yet cats are still banned while dogs are allowed. Already in 2020 but HDB is still so backwards in their thinking. At least, even with these rulings dogs are still allowed so I don’t think there is a reason for complaints”.

At the same time, online users like Harcharan Singh believe that this regulation could lead to a situation where bigger dogs would be kept in cages until they are sold. These dogs would then be subjected to live in a limited confined space in the HDB flats. This sentiment is also shared by netizen Darren Tay.

Other netizens find that the increase from 50cm to 55cm, just an increase of 5 cm to be somewhat ridiculous. 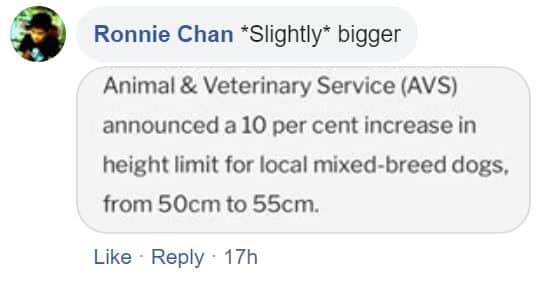 Separately, netizen Jonathan Lum advocates that these adoption agencies to be audited as they are being run on public funds.

Load More
No Result
View All Result
<i cl