The staggering increase of COVID-19 cases in Singapore with a majority of the patients being migrant workers had polarised the community. The different attitudes displayed towards these workers were amplified during the current situation. While some people treat them poorly due to discrimination and prejudice, there are still kind people who remember that migrant workers are humans as well.
Yesterday (20 April), migrant workers at Jiwa Dormitory at 16 Fan Yoong Road received generous contributions from a neighbourhood of Singaporeans led by Amy Kua from Block 138 Taman Jurong. According to William Willi’s Facebook post that was shared to a Facebook group, True Life of Singapore Migrant Workers, he had previously requested for contribution from the public, and Mdm Kua responded to his request without hesitation.


A comment Mr Willi left previously to seek support from the community: 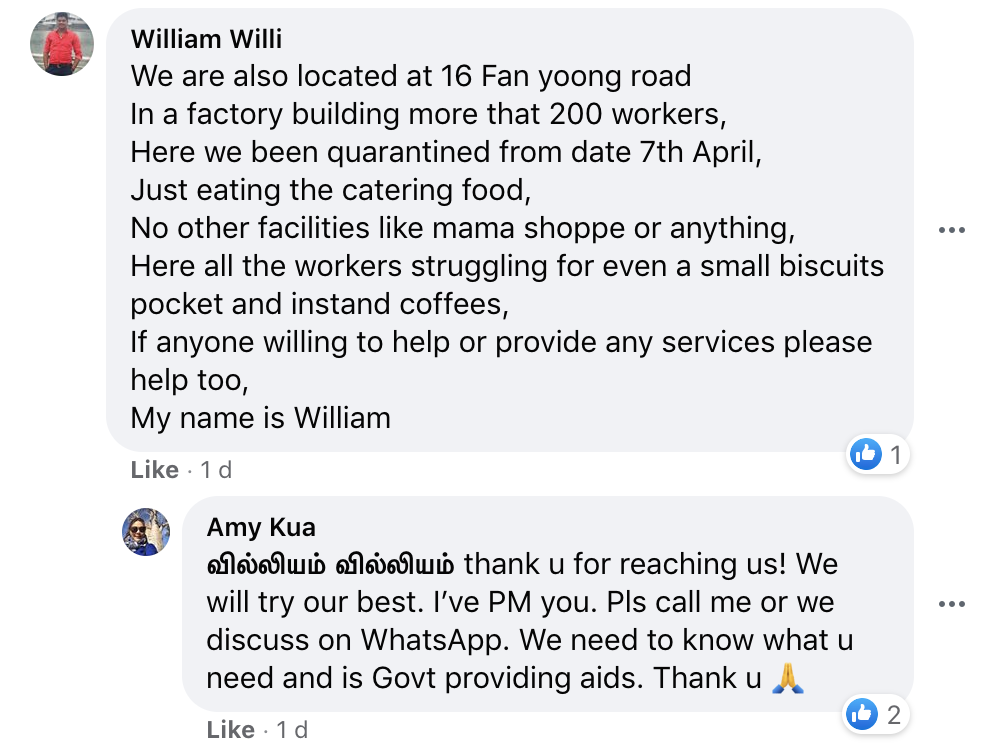 On behalf of the workers at Jiwa Dormitory, Mr Willi thanked Mdm Kua for her kindness and generosity for contributing snacks and food items to his dormitory. He took a few photos and a video to show that the workers were beyond happy to receive the said contribution.

“I was able to see a smiles from our dormitory workers while receiving items,
On behalf of Jiwa Dormitory from the bottom of our heart thanking you for the contribution,
May our prayers will lead you to be healthy and live long life.
Once again thanks a lot for the contribution,” wrote Mr Willi.

In the photos, it could be seen that Mdm Kua came with an abundance of food items. Other than contributing to the workers at Jiwa Dormitory, Mdm Kua had also enrolled the people from her neighbourhood to donate necessities to the migrant workers at Kian Teck Dormitory.
Considering how Ramadan is just around the corner, Mdm Kua and her neighbours took up the initiative to make the migrant workers happy by donating food items, clothing, personal hygiene products, slippers, prayer mat, used mobile phone chargers and earphones.


She updated the group members of True Life of Singapore Migrant Workers, with several videos showing that they were distributing the donated items to the workers.