A year after being sworn-in as President, has Halimah Yacob proven her worth as Head of State?

In a controversial event one year ago (14 Sep), Halimah Yacob was sworn in as the 8th President of the Republic of Singapore after being elected into office in a walkover election where two of her opponents were disqualified due to changes of the private candidate’s criteria passed months before the PE2017.

As Head of State, her key roles would include the following: to safeguard the country’s financial reserves, to vet key appointment holders in the government, judiciary and civil service, and to act as the “No. 1 diplomat”: receiving visiting foreign leaders in Singapore, and to receive the credentials of foreign diplomats.

Because of the importance of these roles, the academic theory is that the President would need to be popularly elected by the people. Only when this happens, the President will have moral legitimacy as a Head of State and the sufficient mandate to check on the government.

Yet the contrary seems to hold instead.

Professor Terence Lee from Murdoch University said that Singaporean voters “resent that [they]… could not exercise their right to cast a vote, even if just to endorse the PAP’s preferred candidate and legitimise the office of the reserved presidency”. In turn, this did not reflect well on the PAP government.

Before she was elected, she said in an interview with Channel NewsAsia, “I want to serve the people of Singapore and Singapore. That’s my only objective and nothing else”.

In another interview with TODAY, Halimah side-lined her lack of financial experience and pointed to her decades of policy-making experience in both the labour movement and government. This, she argued, would enable her to make decisions when it comes to opening the reserves at the request of the government should the need arise.

Despite her seemingly good intention and popularity as a former Speaker of Parliament, the public has their fair share of doubts about Halimah’s performance after a year in Office.

In a poll conducted by Yahoo!, more than 90% of the 11,700 respondents have had a negative impression of Halimah. More than two in five (41%) believed that she was still #notmypresident while 21% believed that she did not meet their expectations after a year. 17% had no expectations of her, while 12% had no idea what she did. The poll is ongoing and you may answer it here. 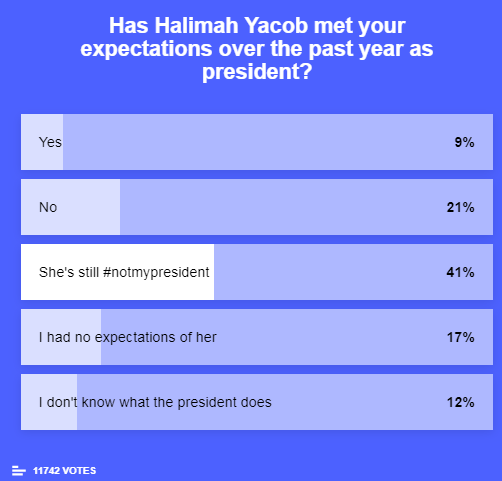 In fact, there are unanswered questions from citizens.

One Simon Lim had written to government feedback forum REACH several times and asked whether Halimah had asked the government to disclose the financial reserves. Lim pointed out that former President Ong’s request in the 1990s was met with resistance, and without doing so, Halimah would not be able to discharge her duties as the second key to our national reserves.

Lim has yet to obtain an answer to his question, and does not appear to be alone in this line of thought.

One Eugene Yeo said on the Straits Times’ Facebook Page: “Mediocre like the rest. Apart from the National day waving and milo endorsement, I cannot think of anything else she had done in her capacity as President”

Alvin Peh: “These are not a President’s job scope but checking and questioning on the country’s reserves and citizen’s CPF and livelihood is. Has she done any of these? Is she the elected President of the PAP’s choice of candidate”?

If we were to look at Halimah’s other roles, then her performance would not be excellent either. While she has not vetoed any public appointments, her role as the “No. 1 diplomat” has not been particularly impressive either.

Earlier in June, Singapore hosted the high-profile and unprecedented Kim-Trump summit. Despite being the Head of State, Halimah was nowhere to be seen in meeting with either men or to extend a public greeting to them as a courtesy call and for a future invite. Again, this raised questions about her lack of diplomatic skills when dealing with World Leaders.

If what we see online is anything to go by, not only does Halimah not have any mandate from the people, her relevance as the Head of State presents a very big question mark.