4,510 sachets of chewing tobacco found hidden in a Malaysian car

Chewing tobacco hidden in various parts of the car such as back seat, back bumper, side panels of car boot, and spare tyre (Source: ICA Facebook page).

4,510 sachets of chewing tobacco were found hidden in a Malaysia-registered car on Thursday (9 August).

Immigration and Checkpoints Authority (ICA) posted on its Facebook page on Friday, saying that the 25-year-old lone male Malaysian driver arrived at Woodlands checkpoint with a car fully loaded by the tobacco.

According to ICA, sachets of chewing tobacco were concealed in almost every part of the car – back seat, rear bumper, skirting, spare tyre and side panels. 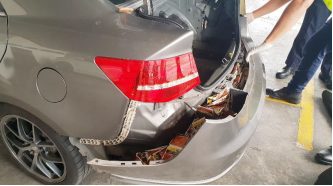 ICA stressed that the borders are the first line of defence in safeguarding Singapore’s security, adding that it will continue to conduct security checks on passengers and vehicles at the checkpoints to prevent attempts to smuggle in undesirable persons, drugs, weapons, explosives and other contrabands.