What was the real reason for cancelling the public Forum on the elected presidency?

Earlier in September, Government feedback portal, REACH decided to hold a public forum to discuss about the proposed amendments to the Presidential Election. Amendments such as including a reserve election for minority races and increased criteria of the Presidential candidate.

However, just a day before the forum was to be held at Furama City Centre, REACH cancelled the event due to “poor response”.

One of the would-be attendees, Dr Tan Cheng Bock, wrote on his Facebook page saying that he had assigned to attend the public forum last week, where he had planned to attend with a few friends and family. He said he was happy that he had received the confirmation letter but was disappointed to receive the message from REACH that the forum was cancelled. 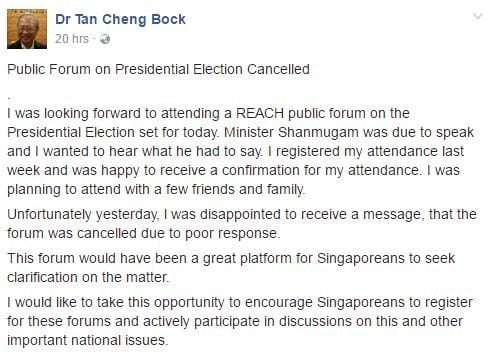 Members of the public took the idea that REACH had cancelled the event because of Dr Tan’s participation in the forum as most Singaporeans have the perception that the amendments to the Presidential Election have always been thought of being the government’s way of preventing the candidate from contesting in the upcoming Presidential Election.

Following up on the matter, NCMP Mr Leon Perera asked the Minister for Communications and Information, Assoc Prof Dr Yaacob Ibrahim in Parliament on 7 November 2016 via written questions to clarify the reasons behind the cancellation.

He asked about the number of people who registered for the REACH Public Forum on the Elected Presidency on 29 September 2016 and what was the intended attendance and how was it derived.

Mr Perera asked what is the threshold for attendance below which it is deemed necessary to cancel such forums, and who made the final decision on cancelling that particular event.

In a written reply to Mr Perera, the Minister wrote that as 30% of sign-ups typically do not turn up for REACH events, REACH decided to cancel the Forum due to the poor attendance.

Dr Yaacob said that the target number for the REACH Public Forum on the elected presidency on 29 September was 320. However, only 80 people signed up as at 27 September.

He added that all registered participants were informed of the cancellation, and are welcomed to attend another of REACH’s dialogues, or provide their feedback through the REACH website.

The minister, however, did not answer though on who made the final decision on cancelling the event. But that is not the main crux of the question.

Although the Minister answered that the event was cancelled due to poor attendance, but it does not make sense.

The forum was supposed to be held at Furama’s Grand Ballroom from 6.30pm to 9pm with dinner served. Given the rates of the ballroom, it is likely to be the option of $6000 to book half a day rather than half a day for 320 pax which would cost $15,360.

A check with the Furama hotel confirms that a cancellation just a day before the actual event would mean a 100% forfeit of the booking fees. This does not include the dinner that has also been planned for the event.

Why would a government feedback agency, rather cancel an event that had already been paid for by tax-payers’ money than to have at least 80 participants to attend an event? Unless REACH claims that it is being given special terms by the hotel to be able to cancel its booking without any forfeiture.

If it did forfeit its booking of at least $6000 (excluding service charge and GST) at the expenses of 100% of the cost, why?

Is it then true that REACH wanted to prevent an uncomfortable encounter for Minister of Home Affairs and Law, K Shanmugam with Dr Tan? After all, Dr Tan did accuse Mr Shanmugam that he jumped the gun in deciding that he would be disqualified when the amendments are passed in Parliament.