A reader has informed TOC that the services for both directions along the North East Line (NEL) is affected due to a train fault.

Although the station announced that the delay will be 15 mins, the reader was stuck in the train cabin for 20 over mins.

He was earlier told to alight the train along with the other passengers. He told TOC that many of the passengers were seen exiting the Woodleigh MRT station.

Another individual on Twitter posted that he is stuck in Buangkok station with the doors closed.

Stuck in the train for about 30 minutes now

Gonna muscle to the other side. #ordietrying

Just my luck im stuck in the train

The NEL is operated by transport operator, SBS Transit Ltd.

No announcement has been made on social media by the train operator. Its mobile app also shows that train services are operating normally. 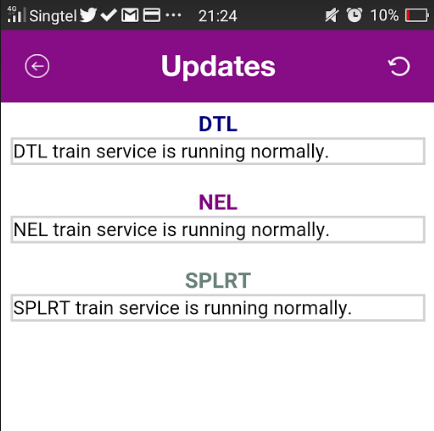 At 9.26pm, Land Transport Authority announced that there is no train service between Punggol and Serangoon stations due to train fault.

#NEL – No train svc between #Punggol & #Serangoon stations(both bound) due to train fault.

Only at 9.30pm, SBS Transit published a post on its twitter stating that there has been a service disruption.

No NEL service between Woodleigh and Punggol Stations due to a train fault.

At 9.39pm, SBS announced that there is free shuttle buses available.

No NEL svc btwn Woodleigh & Punggol stn due to a train fault. Free bus rides are available at designated bus stops near affected stations

However, the mobile app by 9.50pm still showed that the NEL is running normally. 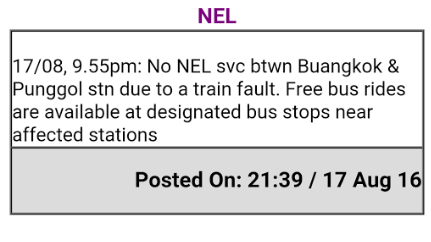 After refreshing the app, the post writes that it was posted at 9.39pm but the timestamp shows 9.55pm. So which is which?

Where has the public announcement criteria gone?

In Exercise Greyhound (2012) carried out jointly by LTA, SBS Transit and SMRT, social media was identified as one of the evaluation criteria for public communication during service disruptions:

“LTA, as the exercise coordinator, assessed SMRT and SBST’s arrangement for free travel on existing public bus services, and the operation of bus shuttle services to provide transport service between the affected MRT stations. They were also tested on public communications, which included promptly informing the public of a service disruption and providing regular updates at the stations and through the media and social media channels such as twitter until normal service is resumed.”

TOC had earlier contacted LTA in 2014 to seek their response on SMRT and SBS Transit’s failure to make public announcement of train faults. LTA has yet to respond till today.