In a report on the website, States Times Review (STR), on Sunday, the Member of Parliament for Tanjong Pagar GRC, Chia Shi-lu, was reported to have snubbed a resident during one of his house visits.

STR reports that comments posted on a private Facebook group, which it said included grassroots leaders, alleged that Dr Chia had failed to visit a home after the owner had opened the door waiting for him – this was after a leaflet had been posted on the door informing the owner that Dr Chia was on his way to visit it.

“Someone knock on the door, when I opened the door are 2 students wearing white telling me, MP Dr. Chia is coming, pls welcome him. I opened the door wide open and wait while washing the dishes in the kitchen, after that I ate my dinner then I go out to throw rubbish, and I saw this flyer hanging on my gate! He didn’t even press the door bell, is this call meet? So insincere!! Y he like to pop by without informing?? Like giving out flyer a week or 2 weeks before? What I dislike is why he every time like to visit resident in such late hour, cannot come in the morning? He come for the sake of coming?if he is so insincere I rather he don’t come – feeling angry”

STR then reports that a grassroots leader responded to the resident’s post by comparing Dr Chia’s attitude with that of Mr Baey Yam Keng, whom Dr Chia had replaced as MP for Tanjong Pagar in the 2011 general elections.

“Baey will always listen to our guide and follow where we tell him to walk… Chia, surprise surprise, always have a mind of his own. There was once we walked halfway and he decided to leave because got something on. He just left like that. And we were told to hang those stupid tags on the doors. Nobody cares after that. Follow up? Haha. If they have an issue they are always told to come to MPS themselves. No time then Bo pian leh. Welcome to chia shi Lu era…”

The Online Citizen (TOC) caught up with Dr Chia on Sunday during a community event and asked him about the alleged incident.

“Normally what we is that we will actually ring. But because I do not want to disturb the resident, so we normally ring once or twice, then I’ll leave a little message, just to say that I [came] by, and that if there is anything that I can help them with, they can contact me directly on my email.”

Dr Chia also said, in response to a question from TOC’s Sharon Ng, on him being parachuted into the GRC in the last elections, that he had been working in the grassroots “for a long time” before that.

Here’s the video of TOC asking Dr Chia the questions: 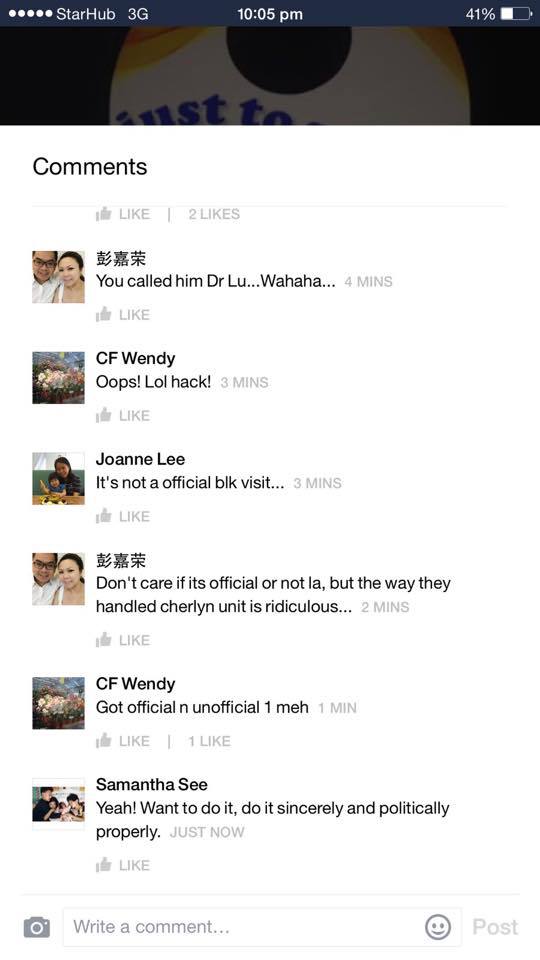