The change: Candidates are now allowed to spend more per voter – from S$3.50 to S$4.00 for every voter on the register of electors in the division a candidate is contesting.

Why a cap on spending limits? According to the ELD, “The law imposes a ceiling on a candidate’s election expenses to ensure a level playing field. Spending in excess of the maximum amount in the law is an illegal practice.”

Website update on maximum number of posters and banners allowed

The change: The ELD has published a formulae on its website that candidates can use to calculate the maximum number of posters and banners they are allowed to display per electoral division (see Figure 1). Previously, this maximum number was only disclosed at the end of Nomination Day.

Prohibition zone for display of banners and posters reduced

The change: Candidates are still not allowed to place their banners and posters too close to polling stations. However, the designated radius, or “prohibition zone”, has been reduced from 200m to 50m.

The rationale: The number of polling stations has increased significantly, so a 200m prohibition zone would limit areas for the “legitimate display” of posters and banners, particularly in more built-up residential estates.

Why a prohibition zone? According to the ELD, this is to “minimize undue influence on voters”.

The change: No change to the policy of minority candidates in a GRC having to produce a Certificate of the Malay Community Committee (MCC) or a Certificate of the Indian and Other Minority Communities Committee (IOMCC) to the Returning Officer on Nomination Day. Malay, Indian and other minority candidates must apply to their appropriate committees to be issued this certificate. However, (mostly) new committee members have been appointed to the committees (see Figure 2).

Figure 2. Members of the MCC and IOMCC. Source: Annex B, ELD press release. 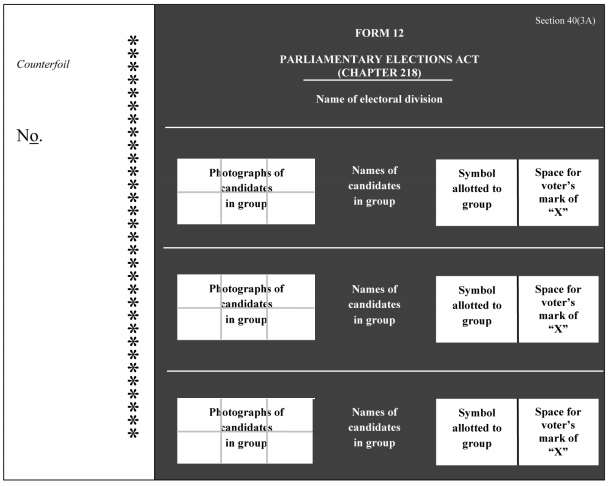 The change: Ballot papers for the next GE will be larger to accommodate candidates’ photos. Other format changes include white boxes on darkened backgrounds and wider gaps between boxes.

The rationale: According to the ELD, this will “make it easier for voters, especially the elderly, to identify the candidates they wish to vote for”.

You can read the ELD’s press release on enhancements to election processes here.