The President's speech of motherhood statements

By Masked Crusader
President Tony Tan Keng Yam opened the second session of the 12th Parliament on 16 May with an incredibly insipid and hollow speech full of motherhood statements which Singaporeans have already been hearing from the government for the past five years, some very much longer. As if to underline this fact, his speech is blandly entitled “Pledging Ourselves to a Better Singapore.” 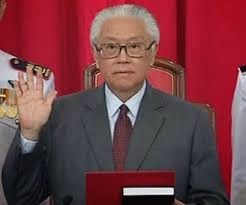 To Singaporeans who have complained that they have received very poor value from a President whose salary is over $1.54 million a year, his speech would have done little to sway their view. At his wages—and the President’s annual staff budget of another $1.54 m—he could well have afforded a better caliber speechwriter than the one Cabinet assigned to him.
President Tan meandered through his speech which at times seemed like he had prior knowledge of the upcoming pre-election crumbs the government intends to toss our way and at others like he was gazing into the future through a dysfunctional crystal ball capable only of showing the same thing each year. But mostly, his speech sounded like he is a PAP Minister once again as he repeated what has been said ad nauseam over the years. He refers to the Government as “my government” and liberally uses “we” and “us” in his speech to align himself to the Government’s positions.
“We want an open and inclusive society” … blah blah … “fully developing everyone’s abilities in a meritocratic society” … blah blah … “through lifelong learning, the Government will help our workers upgrade skills” … blah blah … “promoting home ownership remains a key strategy” … blah blah … “we will strengthen social safety nets” … blah blah … “we must keep Singapore a place where people of different races, religions and backgrounds live harmoniously” ….blah blah.. “our best years lie ahead” …
At one point, he even quotes the Singapore pledge, possibly for the benefit of new citizens who may have forgotten it after reading it off a sheet of paper at their citizenship ceremony before rushing off to quickly apply for their Singapore passport.
For insomniacs in need of a new sleep induction technique; those in search of reading material a notch more exciting than the phone directory; or those for whom an abridged version of the President’s speech simply will not do; the full text of the speech can be found here.
For those who prefer to read the spin of the mainstream media, well, you know where to look.
In a speech high in promises but low in details, President Tan does not give an inkling that he has any disagreements whatsoever with the directions of the Government, which he was part of for 27 years. However, be beseeches common Singaporeans to treat new immigrants and foreigners “with graciousness, kindness and fellowship” and not “allow our differences (in opinions) to pull us apart.”
In perhaps the most ominous part of his speech, President Tan said:

“To ensure that they have enough for their financial needs in their golden years, we will improve the existing CPF (Central Provident Fund) and CPF Life annuity schemes, and develop more options for Singaporeans to unlock the values of their homes in their retirement.”

Generally, when words to this effect have been uttered in the past, it has been jargon for the increase of the minimum sums in the CPF Ordinary accounts for the benefit of Singaporeans. And, it has also meant deals where you exchange your large home which has a long lease for a small room with a short lease to “unlock” the value of our homes. Be afraid. Be very afraid.
Channel News Asia, in an article kindly headlined “President Tan’s speech was all-encompassing, say MPs” cites PAP Ministers of Parliament who make their best attempts to praise their former colleague’s speech. Cornered for an assessment, MP for Marine Parade, Fatimah Lateef said:

“It is not segmented or different from what we’re already doing. I think this is actually a progression from where we are already going and it charts the direction forward so that we know exactly where to fit this in.
That’s the way Singapore works, that’s the way the government works because we have a vision and we work towards that vision.”

It is difficult to know if she understood the question which was asked of her or if she was speaking in codified quatrains as Nostradamus did. More likely, the MP will claim had she not been quoted out of context what she said would make perfect sense.
For those wondering what the President had to say about the national reserves, to which he possess the second key, well, let’s just say his “all-encompassing” speech wasn’t quite all-encompassing.

To end, a gem from President Tan’s speech, which The Straits Times also saw fit to mention:

“Some things remain constant: Singapore will always be a small country …”

Who knows, perhaps this speech too will one day serve as inspiration for a film. A very bizarre one.
The article was first published at maskedcrusader.blogspot.sg
erratum – Pay of the President has been adjusted in 2012 after the committee to review ministers’ salaries submitted their suggestions. (See report), Staff budget by president is $5,8 million. (See report)

Defamation trial: Who gave LKY the impression that 38 Oxley Road had been gazetted if not PM Lee, Lim Tean argues