The Ruling Elite of Singapore is a brilliant publication, in which Michael Barr, a senior lecturer in International Relations at Flinders University, Australia, explores “the complex and covert networks of power” in the city-state of Singapore.
The text is divided into eight concise chapters, written in a clear, objective style that is not bloated with academic jargon. The content is juicy without being slanderous, and factual without being pedantic. 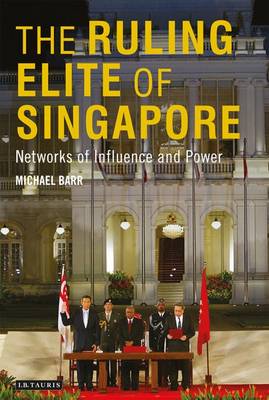 The book takes an incisive look at the “twin myths that Singapore is a meritocratic and multiracial society,” by revealing how the power of personal networks and the centrality of Chinese ethnicity form the true core of the networks of power and influence in Singapore.
The introduction gives a quick outline of the book, which is very useful for quick reference. I especially liked the summary for Chapter 3 (“a brief account of the historical evolution of the elite, the basis of its monopoly of power and the nature of its self-perception as a proud, self-satisfied elite”).
Chapter 5 features a quote by retired Permanent Secretary, Ngiam Tong Dow, who said in a 2003 interview:

“However good [Raffles Institution and Raffles Girls’ School] are and however brilliant their teachers are, the problem is that you are educating your elite in only two institutions, with only two sets of mentors.”

This comment highlights a lack of diversity in the process of elite selection and elite formation. It reminded me of the case with Wee Shu Min in 2006 (who exuberantly advised all commoners to “get out of [her] elite uncaring face”). While this disgraceful incident was not mentioned in Barr’s book, it displayed the self-entitlement and snobbish behavior that often accompanies a closed, elitist mindset.
Barr takes note of “the Lee family’s supremacy” in Singapore with a reminder (through a quote by Hamilton-Hart) of how the Lees are “effectively off-limits as subjects of criticism.” Barr also mentions how Ho Ching and Lee Hsien Yang have never been brought to account for any part in running down the value of their respective government-linked companies. Instead, both were praised and rewarded, despite their companies having engaged in “high-risk ventures that failed spectacularly.”
In the final chapter, Barr is diplomatic in pointing out how even the scenario of an opposition victory would not “necessarily challenge the system bequeathed by Lee Kuan Yew.” The author offers some critical thoughts without being overly optimistic or judgmental, in an effort to determine how much change or continuity there will be in the near future of Singapore’s political situation.
The job of an objective academic or historian is neither to sing praises nor hurl insults. It is to gather information and study the facts, in order to provide analysis and insightful commentary in order to educate the reader. I believe Barr has done very well in this regard, with his book’s intense focus on Singapore’s “ruling elite.”
It reminds us that politicians are supposed to govern society, not simply reward themselves at the expense of their serfs, I mean, citizens, because they feel entitled to do so.
I would like to extend my sincere thanks to the author, Michael Barr, for expanding his original paper into a full-length book, to the prestigious I.B.Tauris for publishing the title (and providing fine editing), and to Palgrave Macmillan for distributing the title in North America, where I am currently residing.
– By Jess: a former Singaporean who has a keen interest in the country, its people, and the direction of its leadership. This post was first published in http://jesscscott.wordpress.com