Stop asking the PAP to change 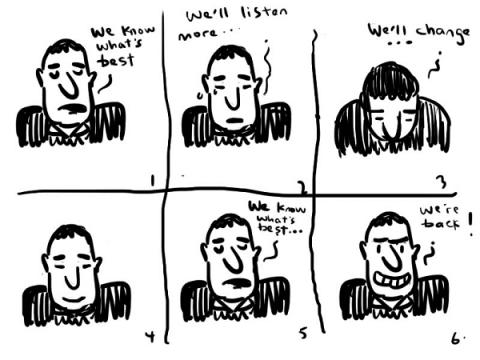 You know a bad relationship when you see one. The parties involved bring out the worst in each other; they blame each other; they can’t see eye to eye; pull each other in different directions; bicker, squabble, fight—and yet they cannot let go. They keep returning to each other like an addiction that can’t be shaken off; and hobble along, caught in an unhealthy knot of co-dependency.

Given some of the things that have been happening in Singapore recently between the People’s Action Party (PAP) and the public, I’m beginning to feel that this is the case here. In the 2011 General Election and Presidential Election, now somewhat behind us, there were massive cries for PAP reform, for a fairer, more inclusive, more open society.

For a while there was hope—ministerial salaries were cut, there was a cabinet reshuffle that saw unpopular ministers who had aggravated and alienated voters sidelined, senior politicians started Facebook pages in an attempt to ‘get with it’, and we got a ‘caring’ budget that generously addressed the concerns of Singaporeans across society.

In the socio-political sphere, diverse liberal voices were going strong in social media, civil society was seeing a lot of activity, and opposition parties were stronger than they’ve been since the 1960s. For a while it appeared as though Singapore was riding a wave of change—the phrase ‘new normal’ arose to describe this fresh feeling in the air, and it even looked—momentarily—that the PAP might succeed in silencing its critics by delivering to them what they had been campaigning for, thus leaving them with less or very little to complain about. And we are seeing the notorious ways of the PAP return with an old, familiar clang. Two defamation suits have appeared in the last few weeks, levelled against blogger Alex Au and SDP’s Vincent Wijeysingha; migrant workers who dared to stand up against exploitative employers and went on strike were deported; a threat of imposing a ‘code of conduct’ on the internet has been looming (and, one suspects, not implemented only because it’s an impossibility); and in a year rocked by a soap opera of scandals—the use of state-controlled media to smoothen out or explain away the ones that made the party look bad, such as the Michael Palmer affair and now the AIM debacle, stood out in stark contrast to the way every other scandal was inflamed and milked for every shred of dignity it tried to cling on to.

And still we hear cries for the PAP to change.

But why would they? Just like a spouse one has been married to for decades is never going to change, the PAP that Singapore has been married to for 50 years is never going to change. They believe in their way of doing things, and their position of power remains unassailable. If we stay with them, we have to take them for who they are and make the relationship work. Staying with them and complaining just spreads the unhappiness. Staying with them and tuning out, becoming apathetic, leaves life too stale and vacuous. If we can’t (or feel we shouldn’t) accept them for who they are, then it’s time to move on.

So we need something to move on to. For a number of Singaporeans that has meant packing up and moving to a foreign land. For those of us who have chosen or who have no choice but to stay, we need to continue to build real alternatives to the PAP and stop viewing them as the only party that can ever govern Singapore.

We need to keep strengthening the opposition, so that one day, one of them can actually run the country. Not be a co-driver, a check and balance, a gratuitous NMP, or a rebel that takes the PAP down a peg or two—but a real government.

Because that’s the only way we’ll find a different path from the one we have now.

Even Lee Kuan Yew said that the only way for politicians to change things in Singapore is to get into Parliament. Outside that, they might have some influence, but they have little power.

With a by-election likely in Punggol East, and several opposition parties eyeing the seat, a chance lies before us to fortify the opposition one bit more. And its good to see that the opposition parties are starting to differentiate themselves, so that they are not just a blanket non-PAP force, but entities in their own right. So voters aren’t just voting for a kneejerk grass-is-greener change, but a more informed change in a specific direction.

And we need to stop feeling surprised or disappointed when the PAP does things their same old way. They have little reason to change, and, just like the rest of us, aren’t going to give up their views just because some of us disagree with them, however justified we may be.

A strong Singapore government that is not the PAP might seem like a long way off. But we need to believe it is possible first and then we can work to make it happen.