By Terry Xu and Howard Lee
When news broke that 300 people “liked” a posting on the Say “No” To An Overpopulated Singapore Facebook page about an Independence Day event organised by the Philippine Independence Day Council Singapore (PIDCS), Prime Minister Lee Hsien Loong responded as such:

“I was appalled to read about those who harassed the organisers of the Philippine Independence Day celebrations, and spammed their Facebook page. They are a disgrace to Singapore.
Fortunately this appears to be the work of few trolls. Heartened that many sensible Singaporeans condemn this thuggish behaviour, and support Tan Chuan-Jin’s stand on this issue.
We must treat people in Singapore the way we ourselves expect to be treated overseas. Many Singaporeans live overseas, and are warmly welcomed in their adopted homes. I just attended our Singapore Day in London. How would we have felt if British netizens had spammed our website, and abused Singaporeans living in Britain?
We must show that we are generous of spirit and welcome visitors into our midst, even as we manage the foreign population here. Otherwise we will lower our standing in the eyes of the world, and have every reason to be ashamed of ourselves.”

These views very likely reflect the PM’s personal feelings on the issue, but they do very little credit to actually addressing the issue at hand. In his statement, the PM has definitively divided the population into those who are either the “disgraceful trolls” undermining the PIDCS’s efforts, or the “many sensible Singaporeans (who) condemn this thuggish behaviour”. The later are, by default, generous of spirit and welcoming of visitors.
Such a narrative pigeon-holes us into the extremes, such that we are forced to take either-or positions that hardly reflect the views of those who might not be against the PIDCS, but genuinely see valid concerns in what the protesters have alluded to.
We have seen attempts – now, these would be by the real trolls – to goad people we know who are genuinely interested in the welfare of foreign workers, to take a stand against the 300 who were against PIDCS. These attempts are unfair and uncalled for. They do not forward the real discussion that needs to be had on foreigner-Singaporeans relations, and have the negative effect of putting people, who are in the best position to help foreigners, on the defensive.
We should expect something more considered, or at least diplomatic, from our Prime Minister. Instead, all we have is a further division of the issue into polar camps, and the important issues that lay in the centre of this incident are nearly forgotten. PM Lee’s remarks have done little more than further divide the nation.
Fortunately, some of the views expressed by commentators on the PM’s Facebook posting have tried to express these issues. Similarly, there have been attempts online to “categorise” them into the extreme positions. But we cannot deny that these views are valid, as they tried to explore issues that need to be address, such as immigration policies, identity, cultural assimilation and respect for host country. These views now risk being drowned, side-stepped or totally ignored by PM Lee’s axing words.
We present some of these views below, and hope they will be useful to let you, and more so our political leaders, think about the underlying issues of this minor, albeit unfortunate, incident. 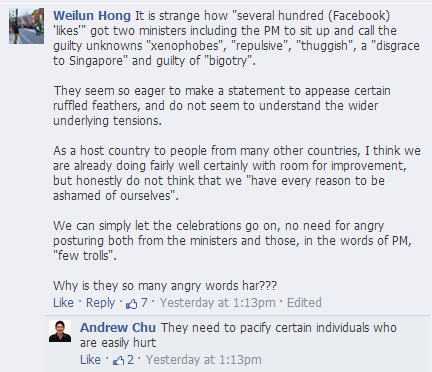 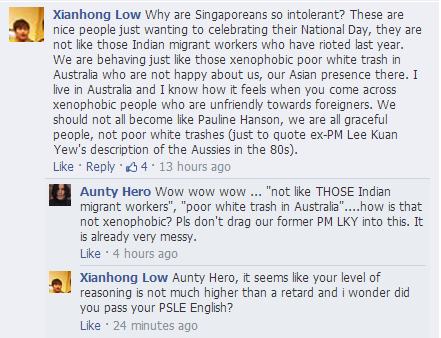 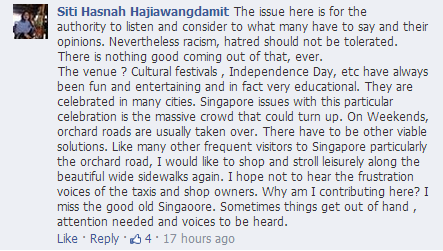 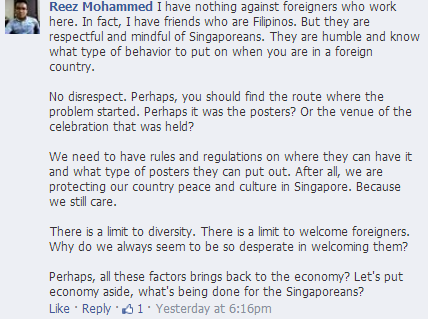 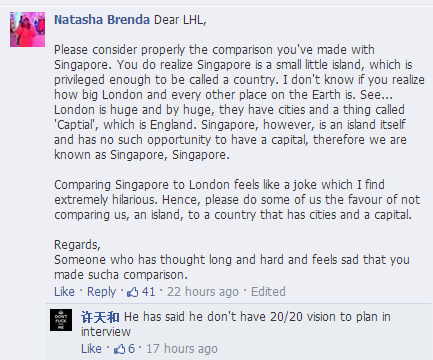