The United Kingdom (UK) government recently announced a new points-based immigration system to attract the highly-skilled workers from around the world as an effort to regain control of their border after UK exited the European Union (EU) on 31 January.

Under this post-Brexit immigration plan, overseas citizens would require to meet specific criteria and gain a total of 70 points in order to work in the UK.

The new immigration plan, which comes into effect at the start of next year, will assign the points based on applicant’s specific skills, qualifications, salaries or professions, and English speaking ability. 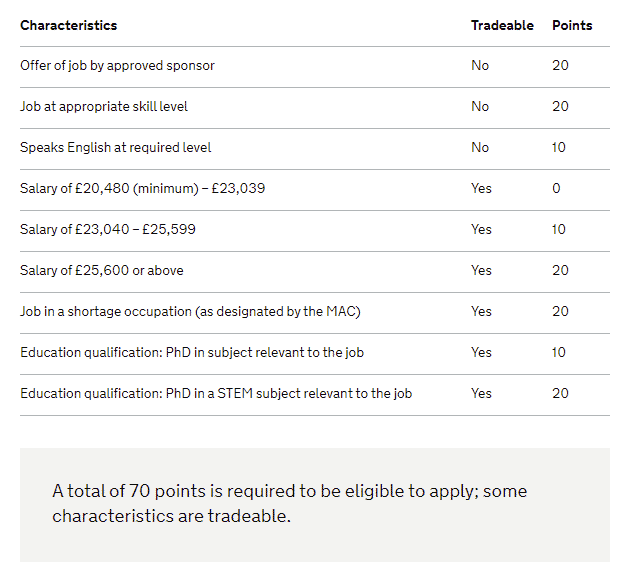 Besides this, the threshold for skilled workers will be broadened to those educated to A-level or equivalent, not only degree level under the current system.

However, waiting tables and certain types of farm-workers would be removed from the new skilled category, but new additions would include carpentry, plastering, and childminding, as reported by BBC.

On top of this, the UK government estimated that 70% of the existing EU workers would not meet the requirements of the skilled workers route, which in return, would help to reduce the overall number of migration.

The government also urged employers to adapt and adjust as they will stop relying on “cheap, low-skilled labour” to come into their country.

“We will not introduce a general low-skilled or temporary work route. We need to shift the focus of our economy away from a reliance on cheap labour from Europe and instead concentrate on investment in technology and automation. Employers will need to adjust,” said the government.

Concerning on the impact in labour market, the government also stated that 3.2 million applications have been received from EU citizen to work in the UK, which could help the employers to meet the labour market demands.

She added that the points-based system will attract the people with right talent while reducing the levels of people coming to the UK with low skills.

The affected industries such as farming and nursing had immediately response to the new introduced points-based system by UK government.

Nick Triggle, a health correspondent of BBC commented that the new immigration plans would impact the adult social care sectors as most of the employees who help to take care older and disabled adults are low-paid care workers.

Mr Triggle noted, “There are already significant shortages–one in 11 posts are unfilled. Foreign workers make up a sixth of the 840,000-strong care worker workforce in England. It is hard to see how in the future these staff could qualify.”

Minette Batters, the president of National Farmers’ Union also voiced out the concerns about the government’s immigration policy failure to recognise British food and farming’s needs.

“As the UK’s largest manufacturing sector, British food and farming is at the very core of our economy and any immigration policy must deliver for its needs,” Ms Batters said in a statement.